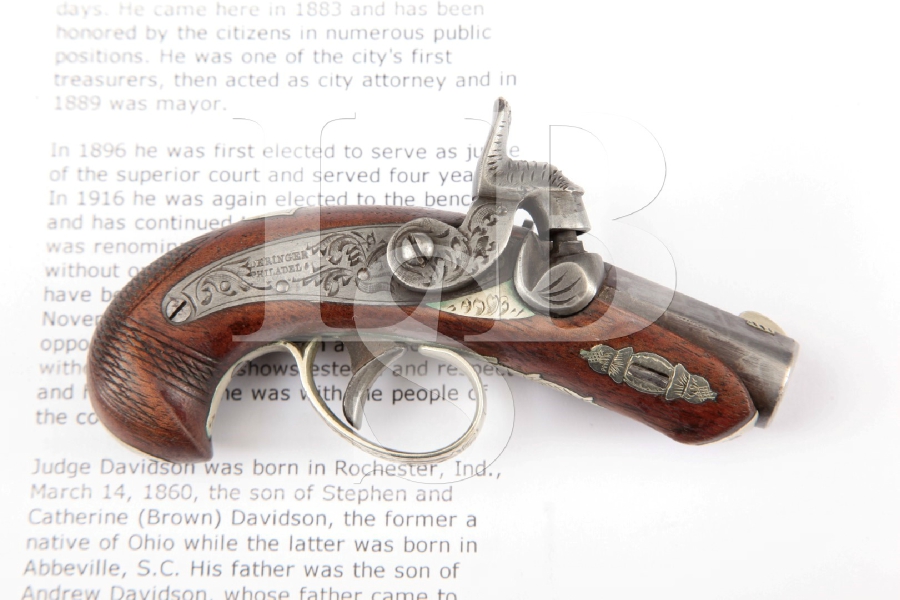 Serial Number: The rear of the lower tang is marked “2”. There are no other numbers present.

Year of Manufacture: The trigger guard finial design is indicative of work from 1850-1870 (Flayderman’s Guide to Antique American Firearms and Their Values, 9th Edition, by Norm Flayderman, Page 408).

Markings: The top barrel flat and the side of the lockplate are both marked “DERINGER / PHILADEL” followed by what should be a small “a”, however the mark is illegible in both cases. The left side flat of the breechblock is marked with the Sunburst “P” proof mark. The front trigger guard finial has a pineapple design similar to the drawing labeled #7 on page 408 of Norm Flayderman’s “Guide to Antique American Firearms”, 9th edition. The trigger guard, sideplate, lockplate, flash plate, wedge escutcheons and top tang are scroll engraved. The shield behind the top tang and the tear shaped cap in the bottom of the butt have been border engraved with a pattern that resembles stitching. The lower tang is marked “2”.

Barrel Length: About 1 3/8” as measured from the muzzle to the seam at the breechblock.

Sights / Optics: The front sight is a dovetail set silver blade. The rear sight is a “V” notch at the rear of the breechblock.

Stock Configuration & Condition: The one piece stock is walnut with checkering on parts of the bird’s head butt. The stock has a chip loss on the left side by the upper tang. The item’s wood finish has worn for the most part, with a few areas remaining. The upper tang has a few small spots of gap in fit to the wood. The shield and butt inserts are slightly elevated from the wood surface, we suspect from normal handling about the pocket; the other metal items have sharp fit to the wood. There is a small un-repaired crack on the left side by the breech, there is a very small loss by the lower tang at the rear left. The stock has general handling marks as photographed. The checkering is still defined, with some areas of faint wear. The stock rates in about Very Good overall condition for an antique.

Bore Condition: The bore is mid gray and the rifling is still sharply defined. There are some spots of mild erosion and browned patina in the bore.

Overall Condition: This handgun retains about 25% of its metal finish, not counting the silver mountings, which have developed a natural verdigris. The lockplate, hammer and trigger should have been case-colored originally, but have muted to the point that they now appear as gray patina. The top tang and breechblock also appear as gray patina. The barrel has thinned considerably on the top, but the portion of the underside protected by the stock still retains some of the original browning; portions of the barrel have thin scratch marks where the browned finish is missing, suggesting the areas could have been cleaned at some point. The screw heads are surprisingly sharp with minimal tooling. The top tang and sideplate screw heads are engraved, the small lockplate and rear trigger guard wood screws are not. The metal to metal fit is crisp. The markings are clear except as described. Overall, this handgun rates in about Very Good Plus condition for an antique.

Mechanics: The action functions correctly. The barrel is rifled with seven grooves. The hammer has moderate play by hand with the screw fully tightened. We did not fire this handgun. As with all used firearms, a thorough cleaning may be necessary to meet your maintenance standards.

Box, Paperwork & Accessories: Included is provided paperwork from our consignor who gives an interesting back story on this Henry Deringer; the paperwork indicates that the great grandfather, John Brown Davidson was a Superior Court Judge in Kittitas County, Washington from 1896 to 1900 and from 1916 until his death in 1928, the gentleman carried this derringer on his person. A biography of Judge Davidson and a history of the court house are included. The paperwork has some folding marks but is fully legible, in Excellent condition.

Our Assessment: Perhaps the most famous of Deringer’s pistols is the one used by John Wilkes Booth to assassinate President Abraham Lincoln, but his deringers were already famous before then and spawned many imitators. We encourage potential bidders to read the chapter titled “Percussion Deringers (Henry Deringer and His Imitators)” in Norm Flayderman’s “Guide to Antique American Firearms”. This handgun has survived in Very Good condition, which is exceptional given its utilitarian pocket protection role. It has an approximate 4 ½” overall length with the barrel measuring about 1 3/8” as measured from the muzzle to the seam at the breechblock; Flayderman indicates that 1 ½” was the smallest barrel length but that variations plus or minus 1/8” were common. It has the appropriate seven groove rifling, engraving and markings; the lower tang is marked “2”, there are no other numbers present. Included is a paperwork packet indicating that this item was owned by a Superior Court Judge from Washington State, along with a biography of the judge and court house. The judge also belonged to the Protective Order of the Elks, Knights of Pythias and Kiwanas Club and certainly had an interesting life. These pistols are becoming quite scarce, especially in this condition and it is even more unique that this item has a documented history. This is a great chance to own a handgun so historic it literally changed the American language. Please see our pictures and good luck!