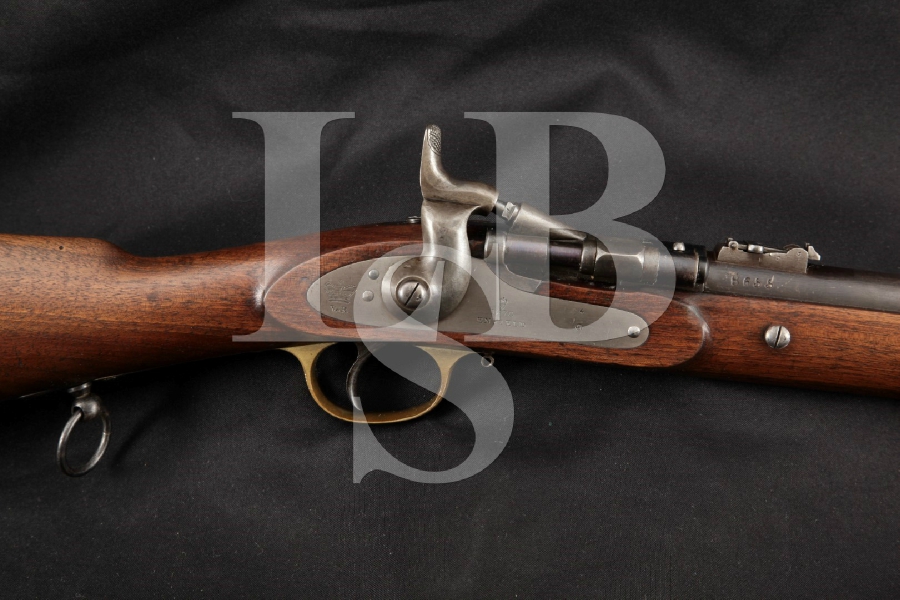 Sights / Optics: The front sight is small blade atop a small raised base. The rear sight is a “V” notched escalator assembly when down. The right side of the rear sight base is marked “1 2 3” and is used with the escalator. It flips up to become a sight ladder marked “4 5 6”.

Stock Configuration & Condition: The stock is one piece hardwood that extends about 6 ¾” past the front of the receiver. It uses a single barrel band. Two screws are located (one on each side) below the rear sight. These are for a leather sight cover (not included). The buttstock has a straight grip and a brass buttplate with a hinged cover in the center for access to a 2 piece cleaning rod. There is a saddle ring mounted on the rear of the lower tang behind the wrist area. The left side of the forearm shows an indentation around what appears to be a repaired (glued) surface chip. The wood shows various scrapes, scratches and compression marks. A few are deep. These marks have been finished over. The buttplate shows scratches and oxidation. The LOP measures 13 1/2 inches from the front of the trigger to the back of the buttplate. The stock rates in about Very Good to Fine overall condition as a refinished antique.

Finish Originality: The barrel has been treated with cold blue. The lock plate has been polished.

Overall Condition: This rifle retains about 90% of its metal finish, as refinished. The barrel has been treated with what appears to be cold blue. Imperfections on the metal, such as scratches, show through the new finish. The barrel shows scrapes and a few scratches. The case coloring on the lock plate has been polished off during cleaning. The lock plate shows small scrapes, small compression marks and some light oxidation. The trigger guard shows scratches and oxidation. Some of the screw heads show some use. The markings are deep. Overall, this rifle rates in about Very Good to Fine condition as a refinished antique.

Mechanics: The bolt locks into place and releases properly. The hammer functions properly. The firing pin protrudes when the striker is pressed. We have not fired this rifle. As with all previously owned firearms, a thorough cleaning may be necessary to meet your maintenance standards.

Our Assessment: This British Mk. III Snider Cavalry Carbine is not a conversion. It was made in this configuration after stocks of Pattern 1853 and Pattern 1861 (an upgraded P1853) Enfield Rifle Muskets were depleted. It is a 146 year old rifle that is chambered in .577 Snider. It is in great shape with a surprisingly strong bore and tons of deep markings. For more information on this great looking rifle see http://www.enfield-snider.com/. Here is some info from an article over at American Rifleman (https://www.americanrifleman.org/articles/2012/12/26/british-mark-iii-snider-carbine/) :
“By the end of the American Civil War it was patently obvious that the self-contained cartridge was the wave of the future. Unfortunately most countries still had large stocks of percussion arms on hand. Ever-thrifty, ordnance officers began searching for ways to convert old muzzle- and breech-loaders to handle the new ammunition… One of the best—and the one ultimately adopted by the British—was devised by Jacob Snider of New York. It involved cutting 2 1/2 inches off the breech of a standard-issue .577-cal. Pattern 1853 Enfield Rifle-Musket. The breech was then expanded to accommodate a cartridge, and a breechblock hinged to the right side of the opening. A “plunger” (firing-pin) was secured through the length of the breechblock at an angle where it could be struck by a modified Enfield hammer… There were basically two versions of the British-issue Cavalry carbine, the Mark II** and the Mark III. The Mark II** was fabricated from the existing Model 1861 muzzleloader, and is easily recognized by its early style breechblock and sling bar. Mark IIIs, which were made in far larger numbers, came about when existing stores of suitable 1861s ran out. The gun did away with the sling bar and featured the latching breechblock, newly built parts and a trap in the butt for a screw-together clearing/cleaning rod. A ladder-style rear sight was graduated to 600 yards and had a provision for a leather cover. Overall length of the gun was a handy 37 1/2 inches, with a 19 1/4-inch barrel, and it weighed 6 pounds, 8 ounces… Though officially replaced in crown service in the early 1870s by the Martini-Henry, the Snider continued to be used in India and some other colonies into the early part of the 20th century, by both military and constabulary units.”