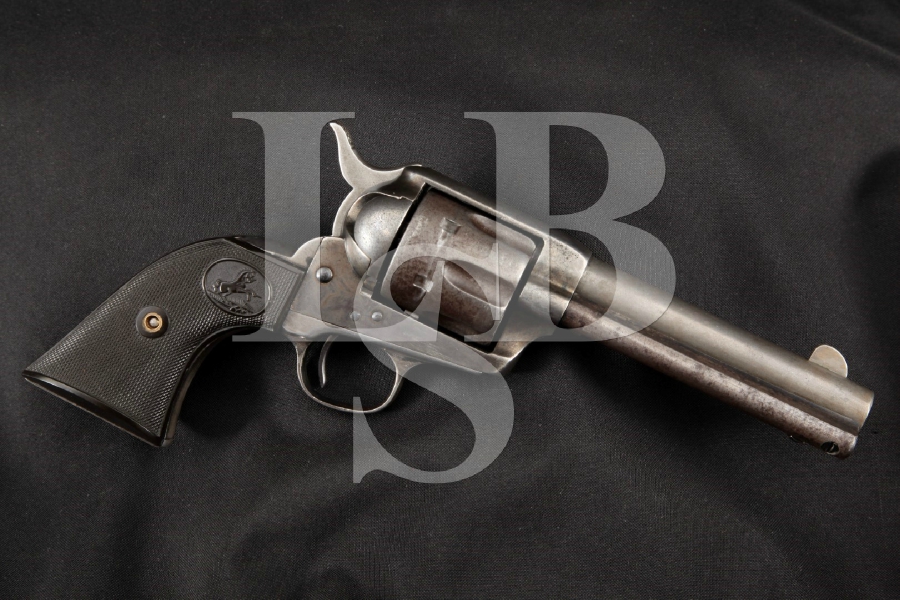 Type of Finish: We think the revolver was originally blued with a case colored frame.

Finish Originality: There is no finish remaining, except for traces of bluing in the bottom of the backstrap, and on the ejector rod housing and trigger guard. We think we can see a few extremely light traces of case coloring in the frame, but what we can’t see is the Rampant Colt logo that was added to the left side of the frame at about SN 134996. We can also see areas where the metal was heavily polished, but no evidence that the revolver was refinished. We suspect the logo was either worn off or polished off when the surface was removed to clean it up after erosion had begun.

Overall Condition: This revolver retains about 4% of its metal finish. There are traces of bluing remaining in the bottom of the backstrap, along the underside of the ejector rod housing and on the trigger guard. There is light pitting scattered over the sides of the frame and trigger guard, and over the backstrap. There are multiple tiny dings scattered over the underside of the barrel, with a few spots of extremely light erosion, several handling marks and a few spots around the caliber markings where the surface is uneven from grinding and polishing. There is a light drag line in the cylinder, and both the cylinder and the ejector rod housing are showing a mottled patina. The hammer checkering shows moderate wear. The screw head directly above the trigger on the left side of the frame and the grip screw are distressed, while the others are sharp. The markings on the top of the barrel are unreadable in spots, and the caliber on the left side of the barrel has been re-stamped, with extremely light remnants of the original marking still showing. Overall, this revolver rates in about Very Good condition.

Mechanics: The action functions properly. The cylinder lock-up shows only a small amount of play and the trigger pull is crisp.

Our Assessment: From http://www.deviantart.com/morelikethis/322444596/digitalart/drawings/technical?view_mode=2#skins: “The Colt Single Action Army handgun is a single action revolver with a revolving cylinder holding six rounds. It was designed for the US government service revolver trials of 1873 by Colt’s Manufacturing Company and adopted as the standard military service revolver until 1892. Although the SAA has been offered in over 30 different calibers and various barrel lengths, its overall appearance has remained consistent since 1873. Colt has discontinued its production twice, but brought it back due to excessive demand.”. This revolver is a 1st Generation Late Black Powder SAA model in .45 Colt. It is in about Very Good condition with about 4% of its original finish remaining, mostly in the underside of the ejector rod housing and in remnants in the trigger guard and backstrap. The grips have been replaced with Colt grips from a later vintage, caliber marking on the left side of the barrel has been re-stamped, and the Rampant Colt logo is missing from the left side of the frame. Otherwise, the pistol is correctly marked for its vintage and functions properly. The blackpowder framed Colts are very collectible, and this one isn’t going to be an exception. There are dozens of variations of Colt SAA revolvers to collect between the three generations, blackpowder vs. smokeless frames, army marked vs. civilian, etc. making it almost impossible for the collector to obtain one of each, and making all of them desirable.