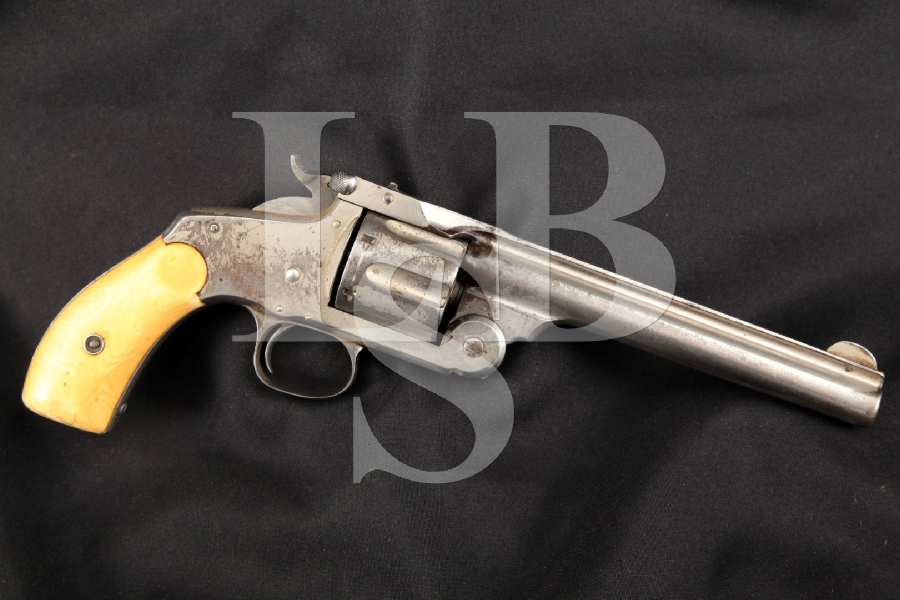 Barrel Length: The barrel has a full length top rib and is 6 ½” in length.

Sights / Optics: The front sight is rounded blade pinned to the top strap. The rear sight is a “U” notch fixed to the front of the barrel latch.

Stock Configuration & Condition: The grips are smooth bone one the round butt grip frame that show yellowing with age and small surface cracks, predominately in the left grip. The inside bottom edge of the right grip has a tiny sliver of bone missing and there are two tiny dings in the bottom rear inside corner of the left grip. Both grips are slightly shy of the metal along the front strap but otherwise fit the grip frame well. The grips are in about Very Good overall condition.

Type of Finish: The revolver is nickel plated with a case colored hammer and a blued barrel latch.

Bore Condition: The bore is gray and the rifling is sharp. There is moderate erosion in the front half of the bore.

Overall Condition: This handgun retains about 35% of its original metal finish. There is surface loss at the front and rear of the barrel and along its sides, on the circumference of the cylinder, the rear sides of the frame, the backstrap and the top half of the front strap. The bare metal at the front and rear of the barrel and on the top of the frame on the right side of the hammer is developing a dark patina. The exposed metal in the other areas shows a sprinkling of pinprick surface erosion. There are light scratches on the sides of the frame and sideplate, with deeper scratches on the left side of the frame below the rear of the cylinder window, the top of the sideplate next to the hammer, both sides of the frame at the rear shoulder above the grips and at the bottom of the front strap. There are also tool marks around the screw heads in the sideplate with a few tiny dings at the bottom of the backstrap and several small dings along the bottom and right side of the barrel. The cylinder has a drag line through the bolt stop cuts and several small dings scattered around its circumference near the rear edge. The barrel latch shows thinning and light to heavy wear in its knurling while the hammer knurling shows light wear. The screw heads are distressed and the markings are clear. Overall, this handgun rates in about Very Good – Fine condition.

Mechanics: The action functions correctly, including the ejector. It has a smooth extraction cam. The barrel lockup shows just a hint of play while the cylinder lockup shows a fair amount of play. The trigger pull is crisp. We did not fire this handgun. As with all used firearms, a thorough cleaning may be necessary to meet your maintenance standards.

Our Assessment: When Smith & Wesson began making centerfire top break revolvers in 1870, they named the large framed .44Model “No. 3”. This was followed by the .38 Model No. 2 in 1876 and the .32 Model No. 1 ½ 1878, based on frame sizes, not date of manufacture. All were first made in single action, and later double action models were added. The No. 3 was made in American, Russian, Schofield and New Model single action sub-models as well as Double Action sub-models. To complicate things even more, there were variants within each sub-model based on caliber and markings. This is a Smith & Wesson New Model No. 3 Frontier Single Action Revolver in .44-40 W.C.F. It is serial number 93 and was made in about 1885, it is one of 2072 pistols produced in this variant. It has the barrel markings of the No. 3 New Model, but with a very low serial number and a 1 9/16” long cylinder, while most of the early New Models had 1 7/16” long cylinders. It has a nickel finish and is in about Very Good condition with 35% of its finish remaining. The barrel lockup is tight but the cylinder lockup shows a fair amount of play. The ejector works properly. This is very nice find for the collectors of Smith & Wesson and other early American revolvers. The top break revolvers were made in so many models, sub-models and variants, it is almost impossible for a collector to acquire one of each, making all of the models collectable. There were only 2072 of the Frontier Single Action variants made, and a few of these were converted to .44 S&W Russian, making this variant even more collectable.