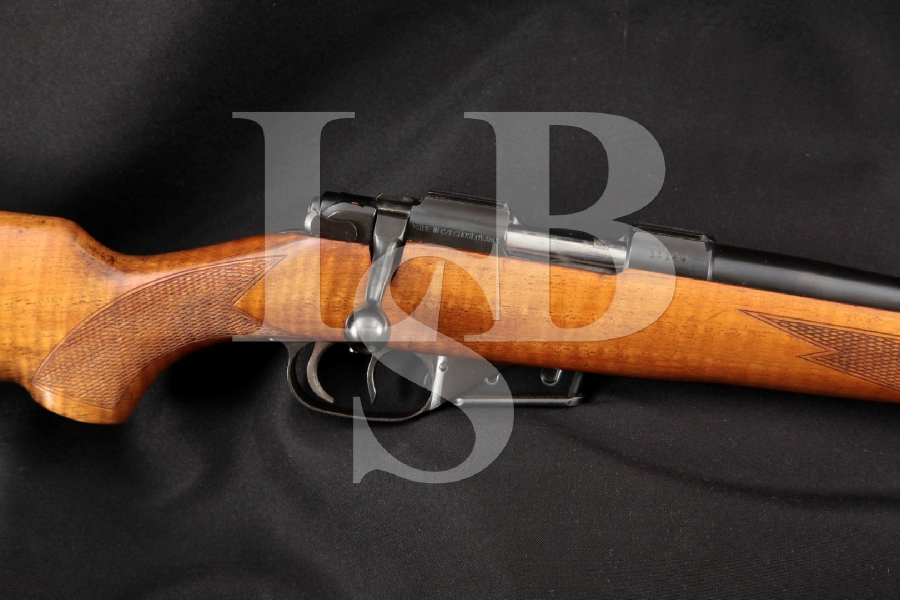 Sights / Optics: The front sight is a blade that is slotted fore-to-aft onto a serrated ramp base, which is integral to the barrel band. The rear sight consists of a fixed 100 meter “U” notched base, with a 150 meter rear flip up blade and forward 200 meter flip up blade. The receiver is milled for the addition of scope mounts (not included), the top of the receiver is flat and milled in a wave-like pattern for glare reduction.

Stock Configuration & Condition: The European hardwood stock has gorgeous fiddle-back grain, a Schnabel forend tip, pistol grip and two sling swivels installed on the underside of the forend and belly. The forend and pistol grip have flank checkering. The stock shows scattered light to moderate depth marks which have compressed, but not marred the wood surfaces. The underside of the grip and top of the wrist have natural darkening. The LOP measures 13 ¼” from the front of the trigger and 14 1/8” from the front of the forward trigger, to the back of the checkered plastic butt plate; the plate has shallow scuffs and a few compressed checkers, rating in about Fine condition. The stock rates in about Fine Plus overall condition.

Overall Condition: This rifle retains about 93% of its metal finish. The balance of the finish shows some operational wear on the bolt and receiver from normal use. There are edge thinning on the magazine well, front sight hood and barrel band, along with light matting on the serrations of the receiver. The top of the sight hood has light marks, the barrel has a few spots of wear that are leading to patina. The screw heads are sharp. The markings are crisp. Overall, this rifle rates in about Excellent condition.

Mechanics: The action functions correctly. The double set trigger, with the rear trigger set, produces a crisp 6 OUNCE break with no take-up. The bolt has a Mauser-like claw extractor and performs with fluidity. We have not fired this rifle. As with all previously owned firearms, a thorough cleaning may be necessary to meet your maintenance standards.

Box, Paperwork & Accessories: Included is one unmarked 5-round magazine with a spot of lost bluing on the left flank and some edge wear from normal use; there are also a few spots of surface etching which has turned to patina. The magazine is in Fine condition.

Our Assessment: This is a Czech made BRNO ZKW 465 Hornet Sporter, which has exceptional wood grain, deep bluing and double set triggers; with the rear trigger set, the forward trigger breaks at 6 OUNCES! The wood has nice fiddle-back grain patterns and a Schnabel forend, the stock has but a few minor cosmetic marks. The metal retains about 93% of its finish and the bore is bright with sharp rifling and no erosion. One 5-round magazine is included, which should feed this Mauser-style bolt rifle quite well. These rifles are sought after by collectors and hobbyists alike for their effective caliber and true construction; from Wikipedia “Survivalist Mel Tappan on the .22 Hornet: “It is accurate, has virtually no recoil and a light report…. [I]ts performance limits its use to small game and pests within 150 or 175 yards. It is by no means a reliable deer cartridge, even with handloads.”[7] Sam Fadala of GUNS magazine calls it “perfect for mid-range varmints of all stripes,” everything from small game, mountain birds (e.g., blue grouse), turkey, javelina, peccaries, coyote, and Australian wild pigs and goats.[8] The Hornet is considered an optimal cartridge for turkey hunting, though it is not as powerful as modern .22 centerfires.[9] At mid-century, southern sportsman Henry Edwards Davis pronounced the Winchester Model 70 chambered for the Hornet “the best commercial rifle for wild turkeys the world has ever seen”.[10] In 2011, Lane Kinney was awarded the “Top Turkey in the World” award by Safari Club International for a record-setting Osceola turkey taken with a T/C Contender pistol in .22 Hornet.[11][12] The Hornet’s virtual absence of recoil has made it even quite popular among deer hunters in some areas, although it is generally regarded as very underpowered for deer unless bullet placement is absolutely precise.[13] American hunter Jack O’Connor decried this practice in the 1950s, stating the Hornet could “under no circumstances” be considered a deer cartridge.[14] Many jurisdictions such as the Netherlands, the UK (Other than England and Wales) [4] and some states in the USA currently prohibit the Hornet (and other .22 caliber cartridges) for use on deer.”