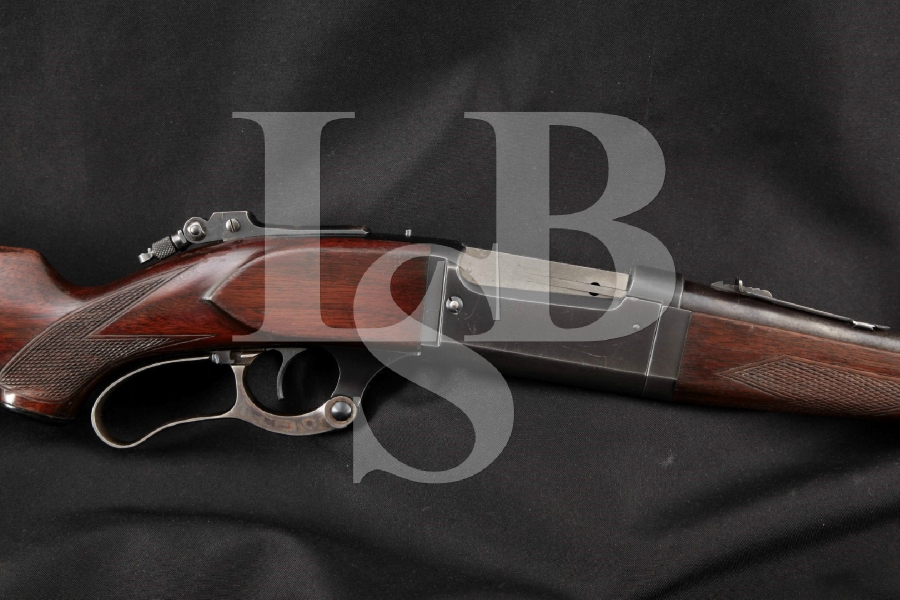 Sights / Optics: The front sight is a German silver bead held in a slotted base fixed to the barrel. The rear sight is a flat topped “U” notch elevator sight that is dovetailed into the barrel. The upper tang has a Lyman No. 1A Combination Tang Sight mounted, the base of which is marked “LYMAN / MIDDLEFIELD / CONN. U.S.A.”. The sight folds, has a locking bar on the left side and the small aperture can be pivoted forward so that a much larger aperture is available for moving targets.

Stock Configuration & Condition: The stocks are checkered walnut with a high-gloss finish. The grip has a checkered black hard rubber grip cap and there is a serrated steel shotgun style buttplate on the butt. The bottom of the buttplate is marked with an oval Savage Quality Indian Head logo. The forend has a Schnabel tip and a serrated takedown latch on its underside. There is surface loss around the buttplate, in the wrist and at the front of the comb, and in the underside of the forend. The finish at the back of the buttstock has bubbled as though it was exposed to excessive heat and there is a chip off wood missing at the toe. The buttstock shows several dings, drag lines and light handling marks, with a few scrapes through the finish. There is a scrape through the finish at the back of the upper tang on its right side that appears to have a short hairline crack running along its inside edge – we can’t tell if it is a scratch or a crack it is so thin. The forend shows a small ding on the bottom edge of its Schnabel tip and a few more dings scattered over its sides. In general, the wood to metal fit is excellent. The factory hand cut checkering shows moderate wear on the forend and the left side of the wrist and light wear on the right side of the wrist. There are two marred areas on the right side of the wrist. The LOP is 13” from the front of the trigger to the back of the buttplate. The buttplate shows thinning, light wear at the heel and toe and a few light marks in the serrations. The buttplate is in about Very Good plus condition. The stocks are in about Very Good condition.

Type of Finish: The receiver and barrel are blued, the lever is case colored and the bolt is “In The White”.

Bore Condition: The bore is mostly bright, tending to gray at the muzzle. The rifling shows light wear. There are a few spots of light erosion about 3” from the muzzle. Our bore gauge measures a ME of 1.0.

Overall Condition: This rifle retains about 65% of its metal finish. There is thinning in the barrel and on the edges of the receiver, with a few tiny spots of pinprick surface erosion in the barrel at the front of the address. There are a few light marks on the receiver with three small dings on the lower left side. The barrel shows several light handling marks scattered over its length with a single tiny ding about 6” behind the muzzle on the left side. The case coloring on the lever is still vivid. The screw heads are sharp except for the screw at the left rear of the receiver, which is disfigured. The markings on the top of the barrel and the chamber ring are very light and extremely thin in spots. Part of the address stamped on the rear sight base is missing and the last digit of the serial number on the underside of the receiver has been re-stamped. Overall, this rifle rates in about Very Good condition.

Mechanics: The action functions correctly. It has a flat safety on the right side of the receiver that locks the lever and the trigger. We did not fire this rifle.

Our Assessment: The Savage 1899/99 model rifles have quite a history. They were preceded by the Model 1895, which was the first hammerless lever-action rifle produced. A hammerless action was useful as it reduces the lock time, allows the rifle to be fired more accurately and is less likely to jam in brush or snag in clothing. The 1895 and 1899/99 models used a rotary magazine to hold the cartridges, using a spring-loaded spool with grooves. The 1899/99 models added a counter to the spool to indicate how many rounds are loaded. This design allowed the use of spitzer bullets, which could not be used in the Winchester rifles of the times because the pointed tips in the tubular magazines could cause accidental discharge. This gave Savage a lead in producing rifles that could handle high velocity smokeless powder cartridges with bullets offering flatter trajectories than other lever-action designs. The .300 Savage cartridge first came out in 1920, replacing the less powerful .303 Savage, and instantly became a top deer cartridge. This is a very nice looking Model 99G Deluxe Takedown model. It is chambered in .300 Savage with a 24” barrel, German silver bead front sight held in a slotted base on the barrel, a rear elevator sight and a Lyman No. 1A Combination tang sight. The rifle is blued with a case colored lever. The stocks are hand cut checkered walnut with a lacquered finish, pistol grip, serrated steel shotgun style buttplate and a Schnabel tipped forend. There is a black checkered grip cap on the grip. The rifle is in about Very Good condition with about 65% of its original finish remaining. The barrel shows thinning, light handling marks, a single tiny ding on its left side and a few tiny spots of pinprick surface erosion at the front of the address on its top surface. There are a few light marks in the receiver with three tiny dings on its lower left side. The lever retains most of its case coloring, which is still vivid. The stocks show several dings and drag lines, with areas of finish loss around the buttplate, in the wrist and in the forend. There are a few scrape marks through the finish in the buttstock, including one at the right rear of the upper tang that has what looks like a hairline crack along its inside surface. The bore is mostly bright, turning to gray at the muzzle. The rifling shows light wear with a few spots of erosion near the muzzle. Our bore gauge measures a ME of 1.0. This rifle is in great shape for its age, inside and out. This is a great find for the Savage 99 collectors. You don’t find many 99G models: in 1922 when they first came out, they cost about $51, a 31% increase in price over that of the solid framed 99C, which sold for $39 at the time. That was a large price difference in the 1920’s and the depression years of the 1930’s, and not everyone could afford the difference.