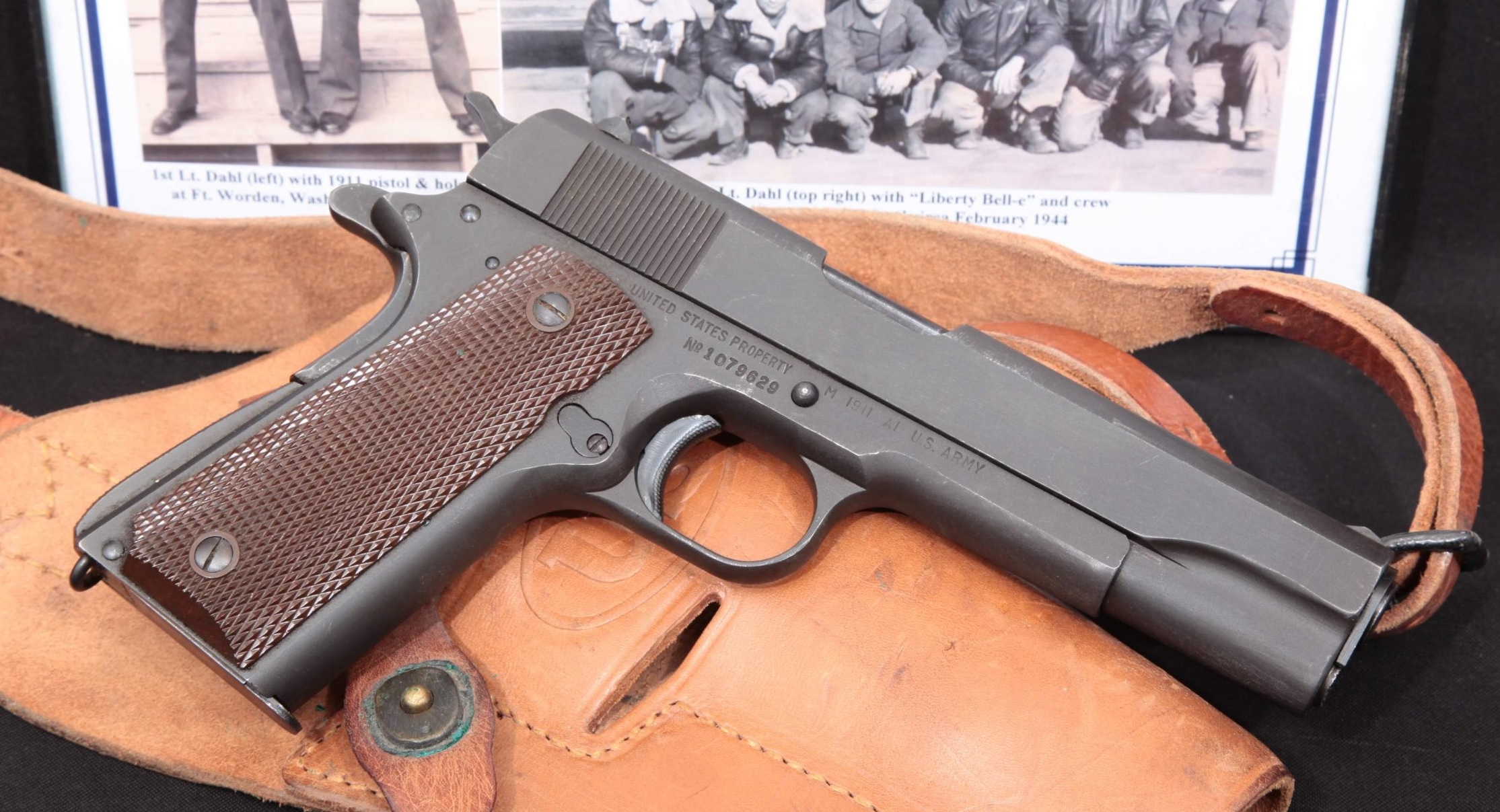 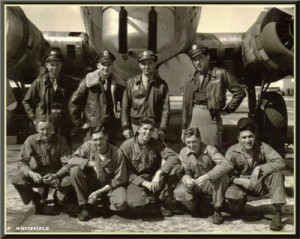 Union Switch 1911-A1 Issued To Distinguished Flying Cross Recipient J.B. Dahl, Co-Pilot of the B-17 “Liberty Belle”, Consigned at LSB

As the Greatest Generation begins to take leave of us, they leave behind their legacy and many of their earthly possessions, including certain of their artifacts from World War II.  Here at Lock, Stock, & Barrel, we have been fortunate to merit the consignments of several pistols of this vintage.

Up for consignment is a Union Switch & Signal 1911A1 pistol, in issue condition, complete with its military issue M-7 shoulder holster, also in great condition.  The US&S pistols are greatly coveted, being the second rarest of the 1911A1s produced during World War II, as well as being produced to the highest standard of production of any wartime 1911s.  This one is in extremely good condition, showing traces of handling on the parkerizing, but showing none of the holster wear or indifferent cleaning that was so often the product of post war use.  The leather M-7 holster is in similar condition; the leather is strong and supple, and the finish shows some surface wear, but that’s about it.

And now, it gets REALLY interesting.  The back of the holster is marked in black ink,  with the name and serial number, of Lt. J.B. Dahl, co-pilot of the justly famous B-17, “Liberty Belle”. Included is a commemorative frame which includes photographs of Lt. Dahl, one of them wearing what is probably THIS very pistol, and pictures of this brave pilot and his young crew, standing before the “Belle”.

There is also a sheaf of documents, including, among other things, his actual military ID card, and his 1944 military records, listing his awards for valor.  These are: The Distinguished Flying Cross, Air Medal, with

I have a proud confession to make; my father was a B-17 pilot in World War II.  (I wish I had HIS 1911!) I know the stories of courage, and I know the statistics; these pilots suffered the second highest attrition rate of the war.  Hundreds of thousands of young men flew over the deadly skies of Europe and the South Pacific; this pistol flew with one of these fine young men.  It is our privilege to handle, to consign, to be in the presence, of the artifacts carried by these men, these real American heroes, who represented what was truly, the “Greatest Generation.”

You can find more information about this particular pilot and his aircraft, the “Liberty Belle”, at the following web addresses: 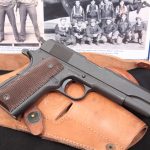 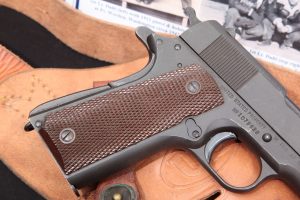 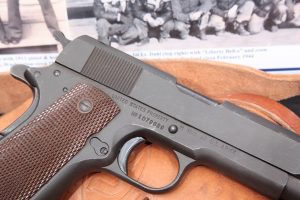 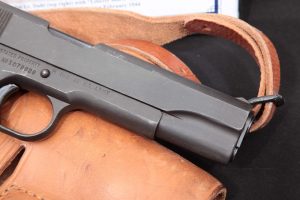 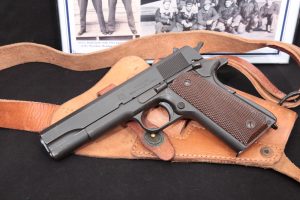 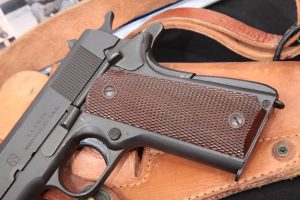 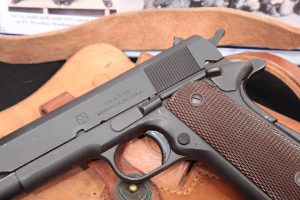 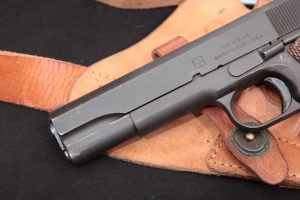 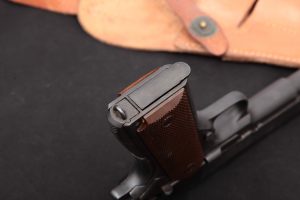 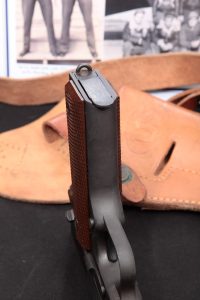 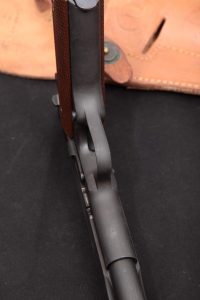 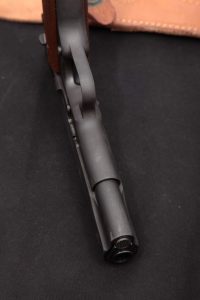 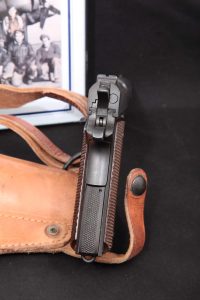 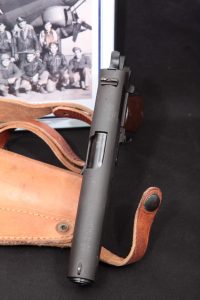 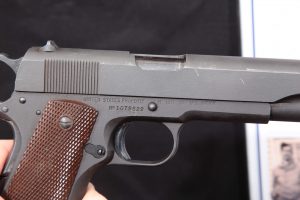 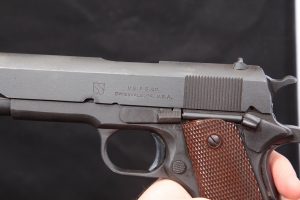 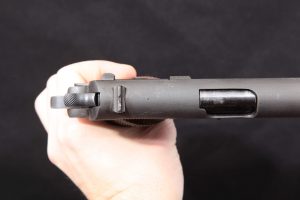 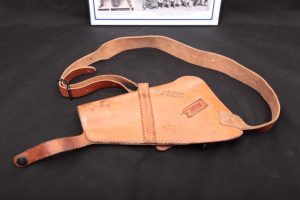 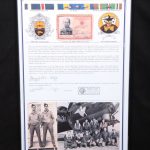