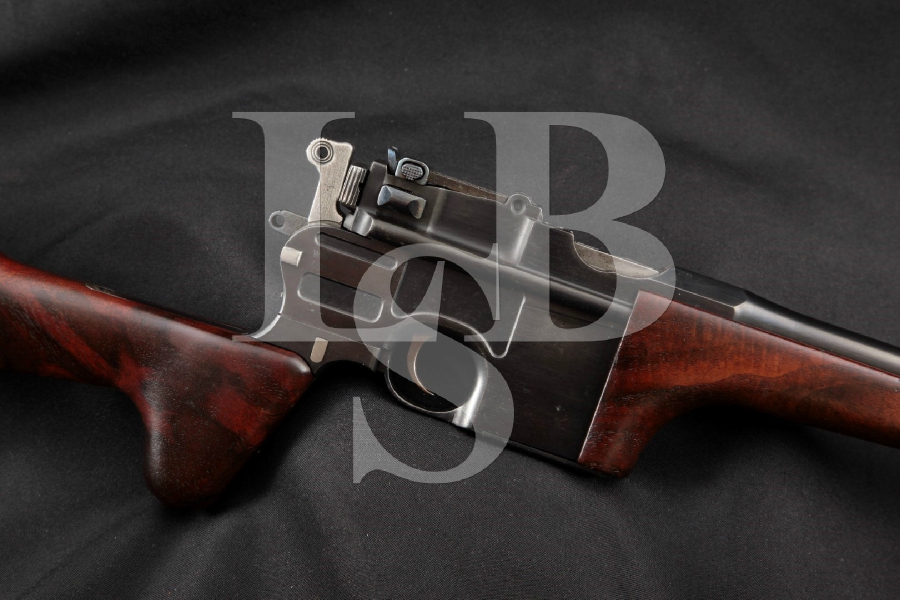 Year of Manufacture: The carbine was made in 1897 (http://oldguns.net/sn_php/c96lookup.php).

Caliber: The caliber is 7.63mm Mauser

Sights / Optics: The pistol is mounted with a “V” notch rear tangent sight with markings from “50-1000”. The front sight is a blued bead dovetailed into a ramped base fixed to the top of the barrel. Although the front sight would appear to be a modern sight, it is identical to that shown for the large ring hammer carbine on page 171 of “System Mauser” by Breathed and Schroeder.

Stock Configuration & Condition: The stocks are two piece dark fancy walnut with a lacquered finish. The forend is about 9 ½” in length and contoured to the front of the receiver and magazine with a Schnabel tip. The buttstock is attached to the receiver with a fore-aft dovetailed slot which is secured with a spring loaded plunger located on the left side of the mounting bracket on the buttstock. The back of the buttstock has a serrated black plastic buttplate. The back of the frame and the front face of the grip on the buttstock form a pistol grip – please see our pictures for a better description than we can put in words. There are a few tiny dings in the front face of the grip. There are also a few dings and scratches under the finish on the left side of the grip, a long, light scratch on the right side of the forend, and several small dings and scratches on the right side of the forend. There is a tiny surface chip in the rear edge of the butt on the right side and the left side is noticeably beveled at the buttplate. The LOP measures 15 3/8” front the front of the trigger to the back of the buttplate. The buttplate shows a few tiny marks and is in Fine condition. The stocks rate in about Fine overall condition.

Overall Condition: This rifle retains about 90% of its current metal finish. The barrel shows thinning on its front edge, light marks along its sides and a small mark through the finish on its underside about 3” from the muzzle. There is extremely light pitting under the finish on the right side of the frame and the mounting bracket on the buttstock, with deeper spots on the left side of the frame. There is also thinning on the edges of the barrel extension with very light thinning on the sides of the frame and barrel extension. The screw heads are sharp. The markings are thin in spots and those on the right side of the frame have been partially removed by polishing. The markings on the top of the chamber are crisp and do not appear original to the gun. Overall, this rifle rates in about Fair condition as refinished.

Mechanics: The hammer cocks and falls forwards when the trigger is pulled, and the safety functions correctly. However, we see at least three problems: the hammer sear is worn, resulting in the hammer riding hard against the bolt, and the bolt is dragging on something else as well, as it doesn’t want to return to battery, and if in battery and the trigger is pulled, we can’t easily get the action open again. If we cock the hammer and then pull back the bolt, we can only get the bolt to move forwards by pushing down on the magazine follower while pushing down on the hammer and then pulling the bolt back slightly and then pushing it forwards. If we push the front of the bolt forwards past the rear of magazine follower and then stop pushing, the bolt stays partially open. If we close the bolt fully, and then pull the trigger, dropping the hammer, and then cock the hammer again, it is extremely hard to get the bolt to open again. This rifle needs to be examined by a competent gunsmith prior to firing. As with all used firearms, a thorough cleaning may be necessary to meet your maintenance standards.

Our Assessment: The Broomhandle Mauser Model 1896 was one of the most distinctive pistols ever manufactured. Most were made with pistol length barrels and the grip frames were slotted for attachment to shoulder stocks. Ladder sights from 0-500 meters and 0-1000 meters were the standard. However, in their book “System Mauser”, Breathed and Schroeder show several photographs of carbines manufactured from the 1890’s up to the early 1900’s in different configurations (small ring hammer, large ring hammer, flat side cone hammer, etc.). Most of the early carbines have barrel lengths of 11.75”, but some of the later carbines had barrel lengths of 14.5” and 16”, although these had the 0-500 meter sights and late type safety. The barrel was either re-stamped, since the markings are so much clearer than on the rest of the gun, or else the barrel was replaced. There are tool marks in the inside surfaces of the barrel extension and what be metal deposited by welding at the bottom of the breech end of the barrel that could support the idea of the barrel having been replaced, or else metal was added to provide a smoother feed ramp. In any event, the carbine form would make this gun very rare even if the barrel were to have been replaced. This carbine is in about Fair condition with 90% of its current metal finish remaining. There is thinning on the front edge of the barrel and the edges of the barrel extension, with very light thinning on the sides of the frame and barrel extension. There is extremely light pitting under the finish on the right side of the frame and the mounting bracket on the buttstock, with deeper pitting in the left side of the frame. There are light marks on the sides of the barrel and a small mark through the finish on its underside. The stocks are two piece fancy walnut. The forend is formed to the barrel and the front of the magazine and has a Schnabel tip. The buttstock forms a pistol grip with the back of the frame – please see out pictures to get a better description than we can put in words. There are only a few light marks in the buttstock and several small dings and scratches in the right side of the forend. The bore is bright with sharp rifling and no erosion. There are some problems with the action: please see the paragraph on Mechanics for more details. This is an extremely rare carbine, and even considering the fact that it was refinished and the barrel either re-stamped or replaced, this should still be a highly collectable piece. We suspect the total quantity of carbines made was under 1000, with only a handful in any given configuration.