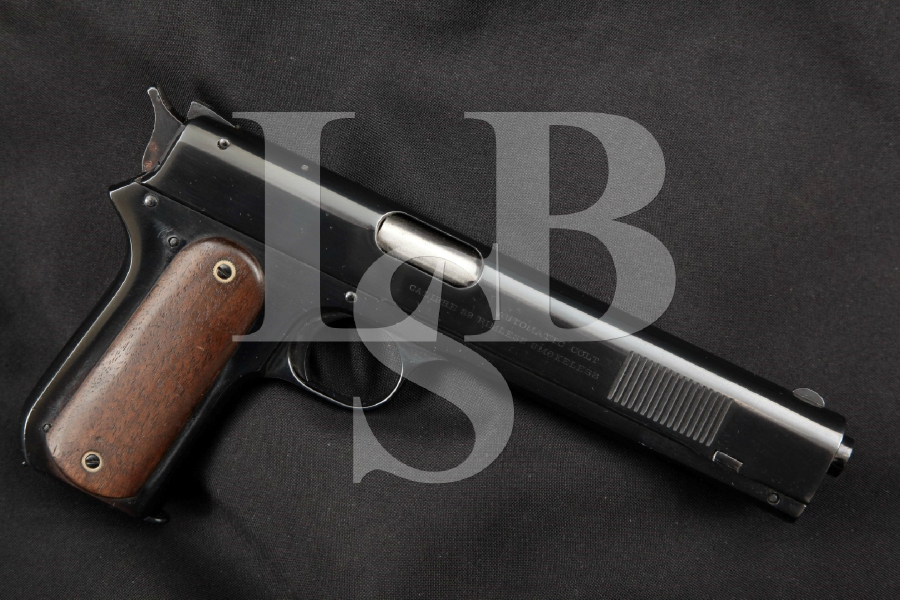 Action Type: Single Action, Semi-Automatic Pistol with unique flip up sight safety. This safety blocks the hammer from contacting the firing pin when pressed down. When lifted, the sight notch becomes visible and the firing pin becomes exposed. The military rejected this safety early during trials, causing the factory to alter many of the original sight safety’s and completely remove the feature by the next model of 1902.

Sights / Optics: The front sight is a fixed blade. The rear sight is the sight safety (as described above).

Stock Configuration & Condition: The grips are smooth hard wood, with a very light oil finish. The panels are free of cracks and have only been lightly sanded and oiled. There are scattered marks and dings, though nothing severe and while the panels show their age, they rate in about Fine overall condition. The screws are possibly replacements.

Bore Condition: The bore is dark with light wear to the rifling. There is mild erosion througohut. We would give this a 4 out of 10.

Overall Condition: This handgun retains about 95%+ of its reapplied metal finish. The finish is quite good, but there is some evidence of metal prep under the finish and it appears to be a darker chemical blue finish. There is some tooling marks around the pin holes, with only very light erosion left under the finish. The is a far better than average refinish. Most of the markings are still clear, there is no dishing of the flats and the edges are still true. This would even be a good candidate for an even better restoration… The grip srews are lightly disfigured and still very serviceable. These and some of the pins are possible replacements. Likewise, the slide lock (cross block) is a nicely made replacement using a Nichols file. You can barely tell this from the exterior. The markings are clear. Overall, this handgun rates in about Very Good condition as refinished.

Box, Paperwork & Accessories: An original nickel plated (but refinished blue) magazine is provided, marked “PAT’D SEPT. 9. 1884”. This magazine retains about 70-80% of the refinish and rates in Very Good condition as well. These sides have some scratches from too-long grip screws.

Our Assessment: From “A Collector’s Guide To Colt’s 38 Automatic Pistols by Douglas G. Sheldon: “The Colt Model 1900 was the first automatic pistol manufactured in the United states and marketed in an environment still oriented to revolvers. Self- loading pistols had been manufactured for several years in Europe but were hardly accepted in the year 1900 when Colt began selling this John M. Browning designed pistol. Browning was nothing short of a genius in firearms design and associating with the marketing and manufacturing abilities of Colt’s Firearms insured the eventual acceptance of the automatic pistol design. The Model 1900 was only made for three years, 1900-1902, and only 4274 were produced. The early pistols had the slide serrations at the rear and were equipped with a spur hammer and a sight-safety mechanism. It was found hard to grasp the slide by the serrations, and they were moved to the front at about serial number 2001. The rear sight was too small for effective use and it was difficult to engage and disengage the safety. Eventually, it was decided to eliminate the sight-safety mechanism and replace it with a sight dovetailed into the slide. A plug was added to fill-up the hole at the front of the dovetail. In order to use up the existing slides, it was first decided to modify odd numbered pistols with the new sight and a round hammer, and to continue manufacturing the sight-safety mechanism with a spur hammer on the even numbered pistols. At about serial number 3500, all production shifted to the modified sight and at serial number 4274 all of the original slides built for the sight-safety system were finally used-up. Colt referred to pistols made after this point as the “Sporting Model” to distinguish it from the 1902 Military Model which came out later in 1902.”.

This gun is unaltered – What an interesting pistol! A new pistol designed from the ground up to use a new cartridge not based on an existing cartridge. That says a lot for Browning’s skill as a designer and Colt’s faith in him. However, with the Army’s desire for a .45 caliber weapon firmly set because of the stopping power problems of the .38 Colt brought to light during the Philippine-American War, the .38 ACP cartridge had no chance for adoption, even if it was quite a bit hotter than the .38 Long Colt revolver round. The design of the Model 1900 allowed minor modifications to become the Model 1902 and finally to the 1905 and M1911 which was finally adopted by the Army. This pistol was made in 1902. It was made with sight-safety system and a spur hammer, both still retained. The pistol has been refinished and has about 95% of its current finish remaining. The Colt Model 1900 pistols are VERY collectible. Not only for their vintage and rarity, but because they were THE first semi-autos made in the United States, and the forerunner of the 1911. It doesn’t hurt that there are several variations: serrations in the front or back, spur or round hammer, sight-safety or dovetailed rear sight, etc. The variations create several combinations and this has inspired some collectors to collect them all. Others are content with collecting one of the Model 1900 variations to place along side the pistols it spawned: the 1902, 1905 and the infamous 1911. If you are just getting started collecting Colt pistols, you will have lot of choices to make, but the one gun you must have is the Model 1900 and an unaltered one if you are lucky.