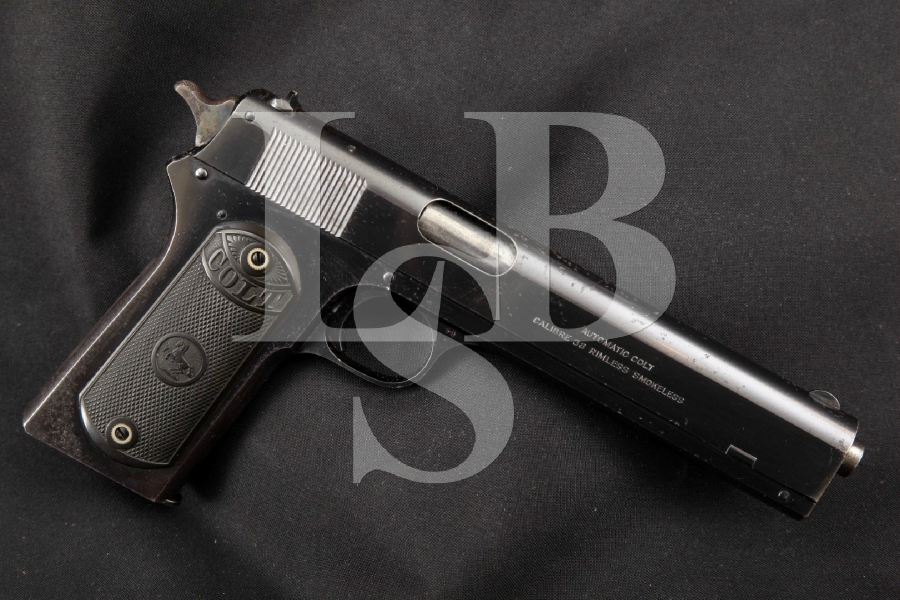 Sights / Optics: The front sight is a fixed blade. The rear sight is a u-notch and dovetail sight.

Stock Configuration & Condition: The grips are black checkered hard rubber with “COLT” in a banner across the tops and a Rampant Colt logo in the centers. The grips show only a few light handling marks in the smooth areas. The checkering shows moderate even wear with no mars. The grips are in about Fine overall Condition.

Bore Condition: The bore is generally bright with light wear to the rifling. There is only mild erosion ahead of the chamber. We would give this a 7 out of 10.

Overall Condition: This handgun retains about 85%+ of its metal finish. This is quite an attractive gun, with little evidence of use. There is thinning to the front and back straps, with a mild drift to patina at the bare metal. There is wear at the leading edges of the slide and some surface scratches from cleaning (most notable on the front strap). The pistol has a few patches of scattered erosion. This can be seen around the serial number and on top of the slide ahead of the ejection port. Despite these imperfections, this remains a far better than average and very attractive original condition gun. The screw heads remain sharp with only light wear. The markings are crisp. Overall, this handgun rates in about Very Good – Fine overall condition.

Box, Paperwork & Accessories: An original blued magazine is provided, marked “CAL .38 / AUTO”. This magazine retains about 70-80% of the finish and rates in Very Good condition as well.

Our Assessment: From Wikipedia: “The Model 1902 is a semi-automatic pistol developed by famous American firearms designer John Browning and produced by the Colt’s Patent Firearms Manufacturing Company in the early 20th century. The Model 1902 was not a new design, but rather an incremental improvement upon the nearly identical M1900, and would transition from the 1900 into three distinct but related pistols with the same action and cartridge, the 1902 Sporting Model, the 1902 Military model, and the 1903 Pocket Hammer model. The 1902 Sporting model was so similar to the 1900 that it continued the serial number range, while the 1902 Military Model featured a different serial range as did the 1903 Pocket Hammer model. The 1902 Military Model featured a square and lengthened grip frame with an additional round in the magazine, while the 1903 Pocket Hammer featured a shortened barrel and slide but retained the Sporting model grip frame.” Despite its name, the Military Model never caught on with the US Army, and only about 18000 of the Military Model were produced over a 26 year span – its popularity decreasing after the availability of the 1905 and 1911 Models in .45 ACP.

This is a 1902 Military Model that still has its original finish and lanyard ring. It is in Fine condition with about 85% of its finish remaining. The top of the slide and left side of the frame show scattered freckling and erosion, but lots of blue throughout. The low volume of pistols produced and the Very Good overall condition of this pistol should elicit quite a bit of interest amongst the collectors. This would look great on a wall sandwiched between the 1900 and 1903 or 1905 models.