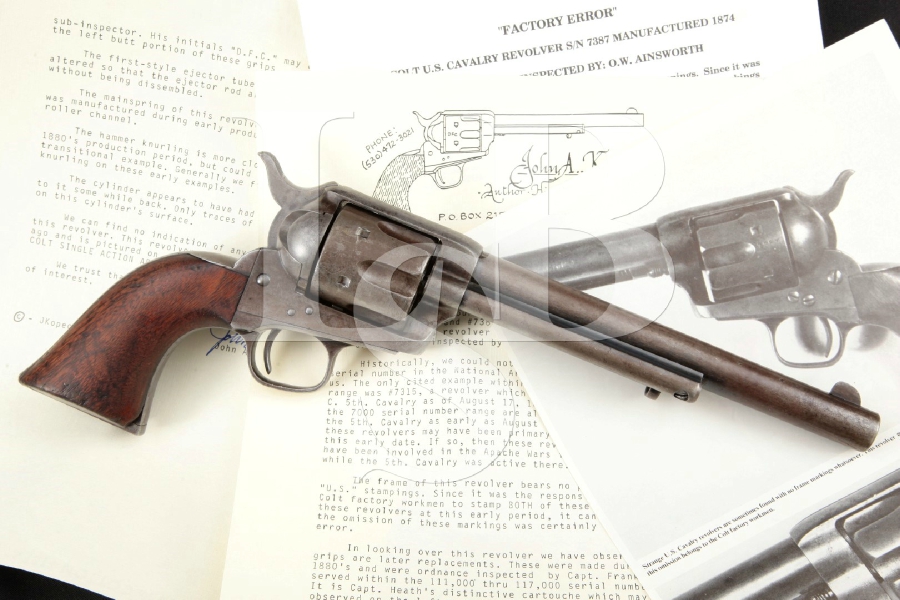 Markings: The top of the barrel is marked “COLT’S PT. F.A. MFG. CO. HARTFORD, CT. U.S.A.” The underside of the barrel is marked “P” and “A”. The underside of the frame, trigger guard, backstrap and the circumference of the cylinder are marked “7387”. The top of the backstrap and the flat at the front of the trigger guard are marked “A”. The circumference of the cylinder is also marked “A” and “P”. (The “A” is the sub-inspector mark of O. W. Ainsworth). The loading gate is marked with the assembly number “540”.

Sights / Optics: The front sight is a quarter-round blade fixed to the barrel. The rear sight is a “U” groove milled into the top strap.

Stock Configuration & Condition: The grip is a one piece smooth walnut that is a replacement grip made in the 1880’s. The left side of the grip bears the inspection mark of Captain Frank Heath, who served within the 111,000 through 117,000 serial number range. The right side of the grip displays a faint cartouche of David F. Clark, and his initials also appear on the left side of the butt. The grips have been sanded and refinished and fit a little shy on the backstrap. Both front corners at the butt are absent, a cluster of deep compression marks are visible on the right side of the butt and a significant compression mark is evident on the left panel above the cartouche. There are a few scattered handling marks present on the grip and the grip shows spots of oil staining under the finish, which is darkest at the butt. The grip rates in about Very Good overall condition as refinished.

Type of Finish: The original finish was blued with a case colored frame.

Finish Originality: The finish appears original, with a dark patina forming on all surfaces, but close inspection shows light traces of cold bluing on the cylinder.

Bore Condition: The bore is bright and the rifling is sharp. There is shallow erosion in the bore.

Overall Condition: This handgun retains about 10% of its metal finish, all in protected areas. The remainder of the finish shows surface loss with a dark patina forming. The barrel, frame and cylinder show a few light handling marks scattered over their surfaces. The barrel has what looks like a pit on its right side behind the front sight and several thin dark scabs of solid erosion. There are light traces of cold bluing on the cylinder. The cylinder doesn’t have a drag line, but there are marks leading into the bolt stop cuts. Most of the screw heads are sharp, but the hammer and cylinder pin screws are disfigured. The markings are clear. Overall, this handgun rates in about Very Good condition as antique.

Mechanics: The action functions correctly. The cylinder lockup shows a small amount of play. The trigger pull is crisp. We did not fire this handgun. The old style main spring has no hammer roller channel, which is typical of early production Single Action Army revolvers. The first style ejector tube has been modified so that the ejector rod and head are removable without being dissembled. The hammer checkering more consistent with 1880s production, but according to Kopec, is likely correct for the pistol.

Box, Paperwork & Accessories: This pistol is accompanied by a letter of authentication from John A. Kopec, author, historian, collector and former President of the Colt Collectors’ Association. This pistol was pictured and discussed on pg. 323 in “A Study of the Colt Single Action Army Revolver” by Graham, Kopec & Moore, and a copy of that page is also included.

Our Assessment: This is a rare chance to own an unusual, documented Colt Single Action Army. The pistol was previously owned by former Colt Collectors’ Association Present and author Les Quick and is accompanied by an authentication letter sent to him by author and historian John A. Kopec. This pistol is an oddity because it possesses no markings on the left side of the frame, an error of omission by the Colt factory, whose responsibility it was to stamp the patent dates and “U.S.” markings on Cavalry pistols while they were in the polished “soft” state before finishing. This pistol was manufactured in 1874, during the second year of production and was sub-inspected by O. W. Ainsworth. Though the exact serial number could not be located in the archives, pistols which were produced during the same timeframe with neighboring serial numbers were issued to the 5th Cavalry as early as August 1875. If this pistol was issued with that lot of revolvers, it would likely have seen service in the Arizona Territory Apache Wars. The grip is a later replacement and display the initials and a faint inspection stamp of Ordnance Sub-Inspector David F. Clark and the cartouche of Captain Frank Heath, who is associated with pistol of a much later serial number range produced in the 1880s. The first style ejector was modified to allow removal of the ejector rod and head without disassembly. The hammer checkering is more typical of later production models, but not unseen in earlier models and the main spring is the early style with no roller channel. The mechanics function is correct, with only a small amount of play in the cylinder lockup, and the metal surfaces are very well preserved, with 10% of the original finish remaining. The pistol is in Very Good condition, and with its rare marking omission coupled with the letter of authenticity, this is a one of a kind addition to a high end Colt collection.