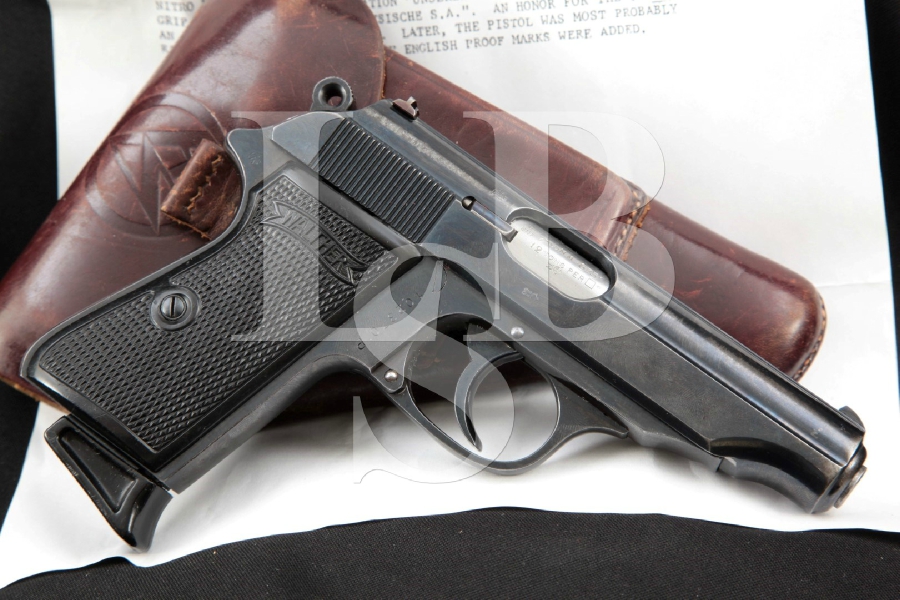 Stock Configuration & Condition: The grips are checkered black plastic with Walther banner logos across the tops of the grips. There are a few light marks in the smooth borders with a very shallow compression mark on the bottom edge of the left grip. The checkering shows light even wear without mars. The grips rate in about Excellent condition.

Type of Finish: The finish is blued. .

Bore Condition: The bore is bright and the rifling shows very light wear. There is no erosion…

Mechanics: The action functions correctly. This pistol has a slide mounted de-cocker that blocks the firing pin and a magazine release mounted on the left side of the slide. The double action trigger pull is a little stiff and the single action pull is light and crisp. This pistol was not designed with a magazine disconnect, but the slide does lock back on an empty chamber. We did not fire this handgun.

Box, Paperwork & Accessories: This pistol comes with one 8 round factory magazine, a brown leather “SA” marked holster and a letter from Mauser. The body has a black phosphate finish and the floorplate is a black plastic finger extension. The magazine is marked on the lower left side with the Walther banner logo and “PP 7,65 m/m”. The magazine shows light thinning and the floorplate shows only a few tiny marks. The magazine is in about Fine Plus overall condition. The holster is made from a single piece of leather that is folded over at the front and sewn along the muzzle and rear edge with the back of the holster folded over to front to form the top flap. There is another piece of leather sewn to the back of the holster and folded over to the front to form a flap over the trigger guard. A magazine pouch is sewn to the front of the holster and is partially covered by the top flap, which is secured to a short strap on the trigger guard flap with a large steel stud. A single wide belt loop is sewn to the back of the holster. There is a large Sturmabteilung (SA) logo stamped into the front surface of the top flap. The leather is supple and without cracks, and the stitching is intact. The leather shows thinning of its finish on the top flap, the lower edges of the magazine pouch, at the muzzle on the back of the holster and on the upper edge of the belt loop. There are also several handling marks in the holster and the two flaps. Overall, the holster is in about Fine condition. The letter details the date of manufacture of this pistol and the markings on the backstrap. The letter was written in 1999 on a Mauser letterhead by James L. Rankin, who is also the author of “Walther Models PP & PPK 1929-1945”.

Our Assessment: This Walther Model PP was made in the 1937 before Germany changed their proof marks to an “Eagle / N” from the old “Crown / N” and after the war was probably brought home by a British soldier. The pistol has an inscription written on the front strap meaning “In Honor of our Comrade in the S.A.” and the date 1.8.1938. Also, the pistol comes with a brown leather belt holster that is stamped with the “SA” logo. “SA” stood for Die Sturmabteilungen der NSDAP, and was formed in 1921 as a militia to protect the leaders of the National Socialist German Workers’ Party. The SA became the main tool of terror of the Nazi party in their fight against other parties and the Communists. The British proof marks are from the 1950’s period, so this was obviously a captured weapon brought home after the war, possibly after the British soldier served in the British zone of occupation. The PP stood for “Polizei Pistole “ and was used by the street police, amongst others. This pistol is in Fine condition with about 88% of its original finish remaining. It shows thinning on the edges of the slide and frame, with strips of thinning on the sides of the side and at the bottom of the backstrap. There are a few light marks in the sides of the slide and the front strap, and a mark through the finish in the underside of the slide. The grips are black checkered plastic that show light even wear in the checkering and a few light marks in the smooth borders. The bore is bright with very light wear in the rifling and no erosion. The SA marked holster is in about Fine condition with thinning in spots and several light handling marks. The pre-war pistols are considered more collectible than any other period except for those made during the war, and the quality and workmanship on these pistols is outstanding. This is a very collectible pistol, and we think the British proof marks and the SA markings on the pistol and holster are going to greatly enhance its value. It is sure to end up in a collection of pre-war or WWI automatics. It even comes with a letter from James L. Rankin on a Walther letterhead, who is also the author of “Walther Models PP & PPK 1929-1945”, validating the markings on the pistol and its date of manufacture.