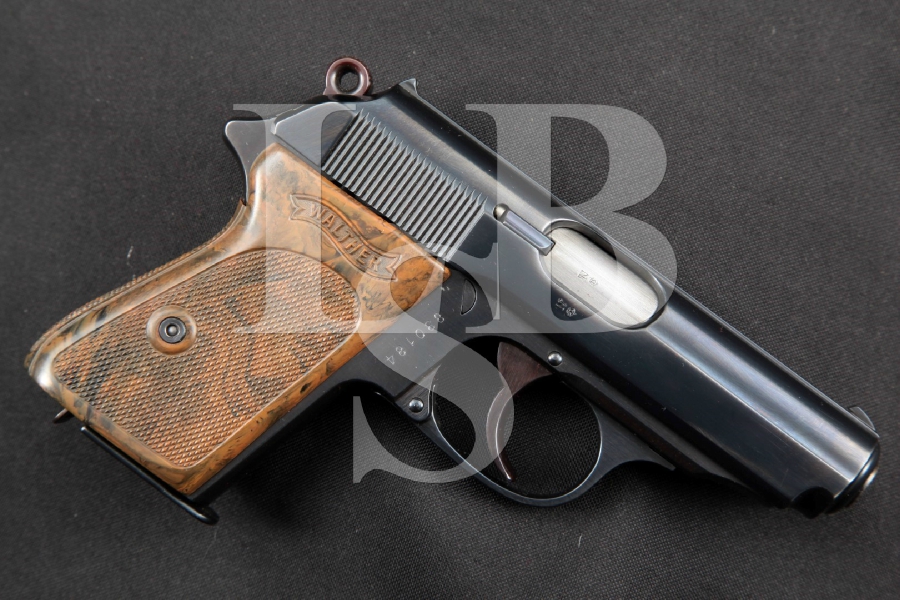 Stock Configuration & Condition: The grip is a one piece checkered brown plastic that is marbled with black. The grip encloses the backstrap and has a Walther Banner Logo at the top of the grip on each side. There are a few light handling marks in the smooth edges of the grip. The checkering shows light wear with a single tiny mar above the grip screw in the left side of the grip. The grips rate in about Fine Plus condition.

Type of Finish: The finish is blued. The hammer and trigger are developing a plum colored patina while the de-cocker has almost a fire blue finish.

Overall Condition: This handgun retains about 99% of its metal finish. There is minor thinning on the front edge of the slide and a small spot of very light pinprick surface erosion on the top of the frame on the right side of the hammer. There is a very light mark on the right side of the slide near the muzzle and a tiny mark on the right side of the frame slide near the top front of the grip. The serrations on the slide’s rib, the hammer and safety serrations and the checkering on the magazine release are all sharp. The grips screw is sharp but shows light marks from a screwdriver and the markings are clear, but two appear overstamped (see Markings section). Overall, this handgun rates in about Excellent condition.

Mechanics: The action functions correctly. This pistol has a slide mounted de-cocker. The double action trigger pull is a little stiff and the single action pull is light and crisp. This pistol was not designed with a magazine disconnect, but the slide does lock back on an empty chamber. We did not fire this handgun.

Our Assessment: The “RZM” on the slide of this Walther Model PPK is the acceptance mark of the Rreichszeugmeistereimark. The pistols were contracted by the NSDAP (National-Sozialistische Deutsche Arbeiterpartei) and were made available for purchase by the Politischen Leiters or Party Leaders at a discounted price. PPK stood for “Polizei Pistole Kriminalmodell” (Police Pistol Detective Model) and was used by the German police detectives (street cops carried the larger PP chambered in .380 A.C.P.). The PPK Model was also very popular in the civilian market. Adolf Hitler committed suicide with a PPK and a PPK was used by the fictional spy James Bond after “M” made him trade-in skeletonized Beretta. The pre-war pistols are considered very collectible and the “RZM” marked pistols even more so. This pistol is in Excellent condition with about 99% of its original finish remaining. It shows light thinning on the front edge of the slide, a light mark on the right side of the slide, a tiny mark on the right side of the frame and a small spot of very light pinprick surface erosion on the top of the frame to the right of the hammer. The checkered brown plastic grips show light wear with a tiny mar in the left grip. The bore is bright with sharp rifling and no erosion. the sides of the frame, with a few tiny spots of surface frosting on the front strap. The brown plastic checkered one-piece grip shows very light wear in the checkering, but there are hairline cracks at the top front of the grip on both sides. The bore is bright with sharp rifling. The grips and magazine are correct for the RZM marked guns, and the serial number is in the correct range. This is a very collectible pistol – the RZM markings started in Dec. 1934 and were stopped in 1936, making the RZM marked pistols among the most collectable of the pre-war PPK’s. This is sure to end up in a collection of WWII or Nazi marked firearms.