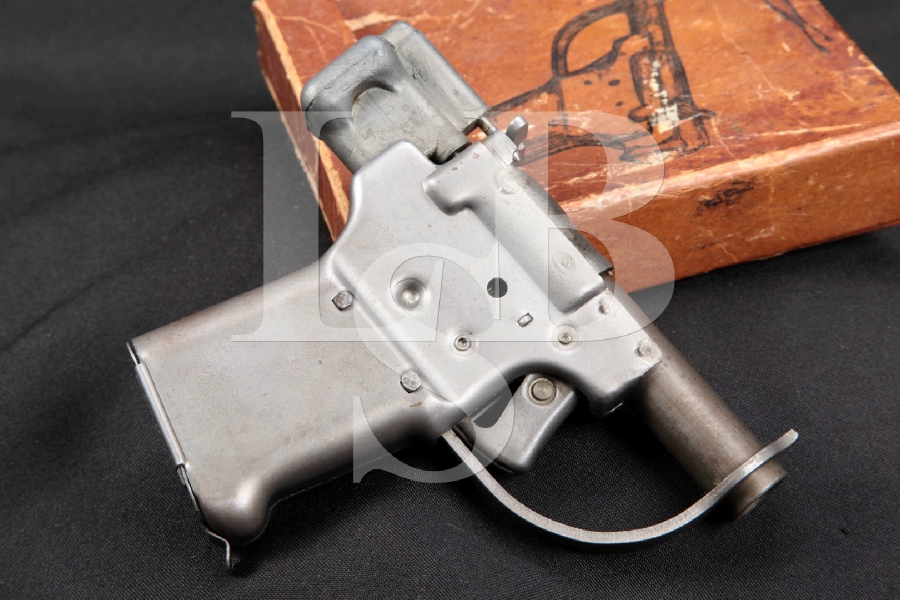 Sights / Optics: The front sight is a crude and fixed blade. The rear sight is a notch in the sliding breech.

Finish Originality: These guns were unfinished.

Overall Condition: This handgun retains about 0% of its metal finish. These guns were never finished. Poor craftsmanship can be seen on this pistol, for which these were famous. That said, when it comes to wear or age, there is very little. There are only a few patches of surface discoloration to the bare metal. This is truly as good as you could expect for an unfinished gun, and the condition can only be explained by decades of careful storage. Overall, this handgun rates in about Excellent condition.

Box, Paperwork & Accessories: The plate for the butt is included, as is the Original but tattered box. The box is in poor condition, with losses. As rare as these guns are, the boxes are even rarer. So despite its condition, it is a true treasure.

Our Assessment: Everyone wants one of these, and the only thing to turn off collectors lately is the flooding of the market by VOCO Reproductions – this one, however, is REAL. Your best reference is Man At Arms, Vol. 35 No. 2, April 2013 – page 39. All features confirming originality are found on this pistol: 1) Poor welding on the top of the breech, 2) lack of manufacturers markings, 3) lack of serial number, 4) poorly cast cocking pieces, 5) .450 bore diameter (reproductions had a groove to groove diameter of .454). . . This is a guaranteed original Liberator and the best one we’ve seen.

The FP-45 Liberator was a pistol manufactured by the United States military during World War II for use by resistance forces in occupied territories. The Liberator was never issued to American or Allied troops and there is no documented instance of the weapon being used for their intended purpose. Many FP-45 pistols were never distributed and were destroyed by Allied forces after the war; and most of those distributed were lost or disposed of without any combat use.

The Liberator was shipped in a cardboard box with 10 rounds of .45 ACP ammunition, a wooden dowel to remove the empty cartridge case, and an instruction sheet in comic strip form[3] showing how to load and fire the weapon. Extra rounds of ammunition could be stored in the pistol grip. The Liberator was a crude and clumsy weapon, never intended for front line service. It was originally intended as an insurgency weapon to be mass dropped behind enemy lines to resistance fighters in occupied territory. A resistance fighter was to recover the weapon, sneak up on an Axis occupier, kill or incapacitate him, and retrieve his weapons.

General Eisenhower’s staff never saw the practicality in mass dropping the Liberator over occupied Europe, and authorized distribution of fewer than 25,000 of the half million FP-45 pistols shipped to Great Britain for the French resistance. Generals Joseph Stillwell and Douglas MacArthur were similarly unenthusiastic about the other half of the pistols scheduled for shipment to the Pacific. The Army then turned 450,000 Liberator s over to the OSS. Resistance fighters in both theatres were supplied with more effective weapons whenever possible, and French use of the FP-45 remains undocumented; although OSS distributed a few to Greek resistance forces in 1944. One-hundred-thousand FP-45 pistols were shipped to China in 1943, but the number actually distributed remains unknown. A few were distributed to Philippine troops under the Commonwealth Army and Constabulary and resistance fighters.