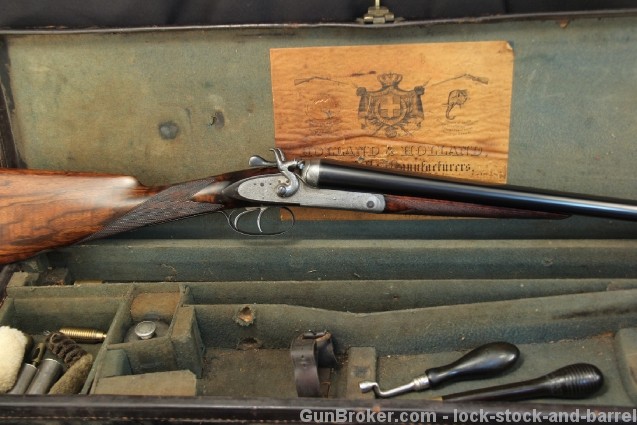 Make: Holland and Holland
Model: Best Quality Hammer Gun
Serial Number: 20520
Year of Manufacture: 1898, According to company records – “it was shot and regulated in November 1898”. Company records indicate delivery to C. A. Mumford, whose name is inscribed on the outside of the case. Factory records also indicate that it was shipped with a “Special Rib”. Our contact at Holland & Holland did not know exactly what this meant.
Caliber: 12 Gauge
Markings: The top of the barrels are marked “Holland & Holland.98.New Bond Street. London”. The bottom of the barrels are marked “20520” on the left and “0520” on the right. The table below each barrel is marked “Nitro Proof 1 1/8 Oz Maximum” with a diamond “12 C”, three proofs; 1) Crown over “P”, 2) Crown over “V”, and 3) a complicated flower looking proof, and the number “12”. In addition, the round bottom of each barrel is marked with “???Indexsteel” in a circular pattern. The sides of each lock are marked “Holland & Holland”. The number “20520” is found on the lower tang and on the forend metal. The water table is marked “20520” with a Crown over “V” proof on each side. We have attempted to photograph all markings.
Barrel Length: 30”. Factory Records confirm this.
Choke: The right bore measures approx. .726” and the left approx. .728” (both open). Company records indicate that this gun was shipped with both “Open” chokes.
Stock Configuration & Condition: The stocks are beautifully grained dark walnut. There is checkering on the forend and pistol grip. The checkering is still reasonably sharp. The LOP measures approx. 14 ¾” from the front rigger to the back of the rubber buttpad. Factory Records indicate that the LOP when shipped was 14 5/16” measured on center (though without knowing which trigger this was originally measured to). The buttpad is still pliable. The forend wood has some very minor nicks at the rear metal on the right side. The buttstock is missing a tiny chip just to the right of the trigger guard at the corner below the lock. There are some surface compression marks on the right side of the stock about at the middle, probably from poor storage and another on the left side about two inches in front of the buttpad. The right side of the buttstock behind the lock shows some small cracks and perhaps a repaired chip. There is a barely visible repaired crack that extends to both sides of the wrist behind the trigger guard. This has been professionally repaired. The stocks rate in about Excellent overall condition, especially for its age.
Type of Finish: Blue/Case
Finish Originality: We believe original.
Overall Condition: This gun retains about 80% of its metal finish. The balance of the finish shows just a little thinning on the barrels with no notable scratches or dings. There is still a trace of color on the locks and the water table, though this finish has primarily faded / muted. There is much color present on the internal surface of the forend. There is some beginning mild surface erosion on the right side of the receiver at the hinge. The trigger guard and lower tang are blue, showing more finish than the remainder of the frame. The pins / screws in the receiver show good blue color on the screw heads. The screw heads are mostly sharp, several are rounded at the slot but look original. The markings are clear. Overall, this gun rates in about Excellent condition.
Mechanics: The action functions correctly. Bother hammers lock back correctly and release with trigger pull. We did not shoot this gun.
Box, Paperwork & Accessories: The original leather box and all accessories are provided. The inside lid of the box has a paper label which reads “Holland & Holland / Gun & Rifle Manufacturers , / 98 New Bond Street , / London / Established 1835”. The label is yellowed. There is a second label found in the upper right corner of the lid which is marked “Charges For Breech Loading Gun” and has the serial number “20520” and hand written “heavy or its equivalent”, and “No. 4 size Powder should be used”. The outside of the leather box is impressed with “C.A. Mumford / B.C.S.”. There is also a round leather medallion crudely lettered “HE”. The leather box has surface crazing and some residue from masking tape. However, the box is in good serviceable condition with good corners and good stitching. The leather straps show cracking but are intact. The inside of the box shows green felt, which has thinned and is dirty and has several holes. Please see our pictures. The accessories include: a horn container housing an extra firing pin, a Holland & Holland box of patches and a container of oil, a two piece perhaps ebony cleaning rod, two snap caps marked “Holland & Holland”, a brass oil can and a heavy metal grease can, two jags, a brush and two mops, an adapter tip, a bone handled brush and a wrench with inset square tip,
Our Assessment: Few guns have ever been created at the level and quality of craftsmanship that Holland & Holland has become World Renown for, for well over a century. You will probably never see craftsmanship as fine as this – guns just aren’t made like this anymore. Everyone is familiar with the name Holland & Holland, and images of an English Gentleman stepping out of a Rolls Royce or Carriage are elicited when the name is heard.

This gun is spectacular – and the complete ensemble only reinforces the inherent desirability. We contacted Holland & Holland on 2/29/2012 and they confirmed knowledge of this gun and features as listed above. The onle aspect not exactly confirmed would be the length of pull, which could either rbe explained by measurubng to a different trigger or with the installation of a buttpad. Regardless – it’s a true and honest Holland & Holland – nearly, if not completely untouched. This may be a once in a lifetime opportunity to obtain this fine original condition shotgun. If you are a shooter, a collector, someone who appreciates “best” quality in a side by side shotgun then this is your pot of gold at the end of the rainbow. 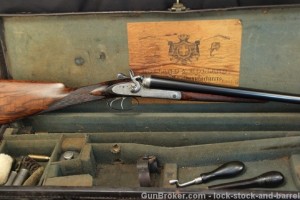