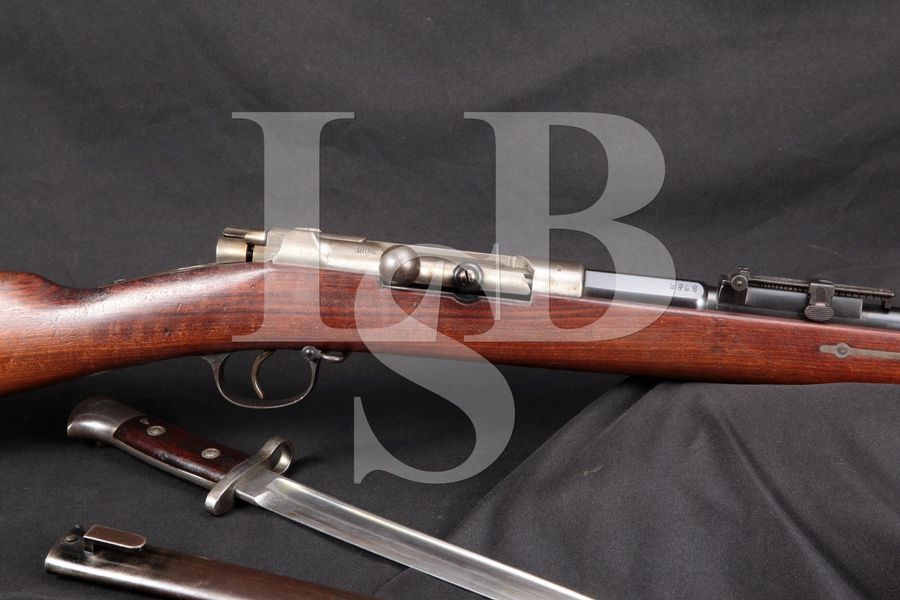 Stock Configuration & Condition: The hardwood stock has a straight grip, two barrel bands, a metal nose cap, two sling loops, a stacking bar mounted on the magazine cap and a metal buttplate. The wood shows areas of deep scrapes and compression marks. The most prominent are on the right side of the buttstock. The nosecap is seated about 1/8 of an inch too far forward. The LOP measures 13 1/4 inches from the front of the trigger to the back of the buttplate. The stock rates in about Very Good to Fine overall condition, for its age.

Type of Finish: Blue, Receiver and Bolt in the White

Bore Condition: The bore is bright and the rifling is sharp. There is a small amount of light frosting at the muzzle.

Overall Condition: This rifle retains about 95% of its metal finish, as refinished. Some imperfections on the metal, such as surface erosion on the barrel, show through the new finish. The barrel bands, nosecap and bottom metal show discoloration from oxidation. The nose cap and buttplate shows scratches. The receiver bolt and buttplate show discoloration from oxidation. There are various other light marks on the metal. The screw heads show light use. The markings are deep. Overall, this rifle rates in about Vey Good to Fine condition as a refinished antique.

Mechanics: The action functions correctly. We have not fired this rifle. The shell carrier and magazine cutoff function. The magazine spring still has tension. As with all previously owned firearms, a thorough cleaning may be necessary to meet your maintenance standards.

Box, Paperwork& Accessories: The rifle comes with a 16 3/4 inch bayonet (11 7/8 inch blade) and a scabbard. The bayonet locks on the rifle lug properly and the release button functions. The metal shows scrapes, small scratches and areas of discoloration from oxidation. The handle is missing chips of wood. Overall the bayonet is in about Vey Good Plus condition. The scabbard shows scrapes, scratches, frosting and some fading. It is in about Good to Very Good condition. The bayonet and scabbard are unmarked so we do not know which model this is. See the bayonet identification guide at http://worldbayonets.com/Bayonet_Identification_Guide/bayonet_identification_guide.html#r1 for further information.

Our Assessment: The Mauser Model 71/84 was designed as a tubular magazine version of the Model 1871 rifle, which was the first rifle model designed and manufactured by Paul and Wilhelm Mauser. The 11x60mm black powder cartridges are inserted through the open bolt onto a carrier and into the eight round magazine. When the bolt is opened, the carrier rises, allowing the round on it to feed into the chamber. The magazine cutoff can be engaged to make this a single shot rifle. This rifle was made in 1886 at the German Spandau factory, and is a piece of Mauser history. It is in Nice condition with matching numbers down to the screws. It is ideal for serious Mauser collectors. For more on the Mauser Model 71/84 see pages 156 to 170 of Robert Ball’s book, Mauser Military Rifles of the War Fifth Edition.
This one is unit marked on the buttplate. We do not know to which unit this belonged or when it was marked. The rifle also comes with an unmarked bayonet and scabbard.