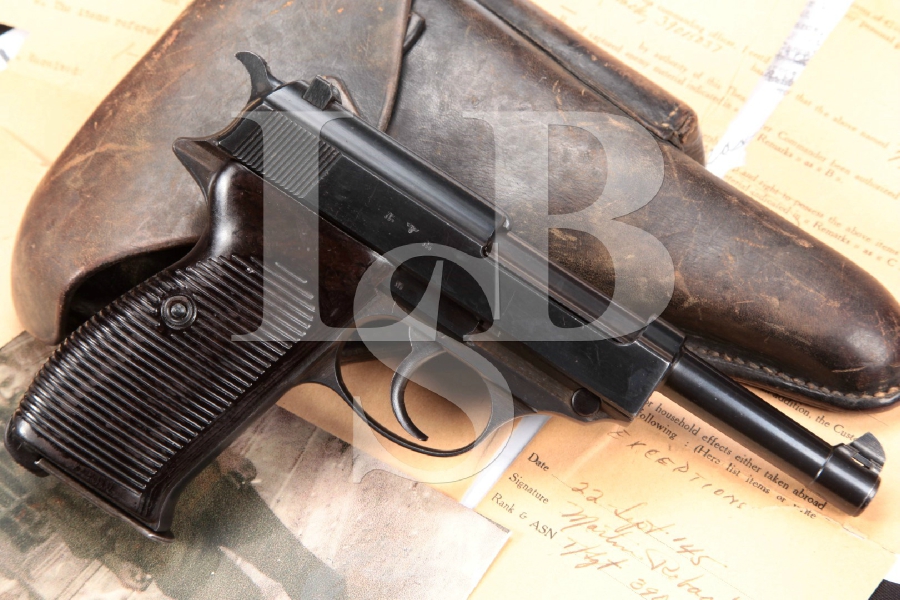 Stock Configuration & Condition: The grips are reddish brown serrated plastic with a slight thumbrest on the left side that enclose the backstrap. A lanyard ring protrudes through a slot molded into the bottom of the left grip. Both grip exhibit a mottled dull/shiny finish from normal handling. There smooth areas of the grips show a few very light marks. There are three tiny nicks in the serrations on the right grip above the grip screw. The grips rate in about Fine to Excellent overall condition.

Type of Finish: The finish is a military blue.

Bore Condition: The bore is mostly bright with sharp rifling. There is light erosion the length of the bore.

Overall Condition: This pistol retains about 90% of its metal finish. There is thinning on the front strap, the front edges of the barrel band and slide, the de-cocker and the tops of the front and rear sights. There is very light pinprick surface erosion sprinkled over the front strap with three tiny spots on the left side of the barrel at the frame and several tiny spots of surface frosting sprinkled over the right side of the slide. The sides of the slide also show several very light handling marks and there are a few small dings in the front strap. The serrations on the safety, hammer, slide release and takedown lever are sharp. The grip screw shows light marks from a screwdriver and the markings are clear except for the small mark on the top right edge of the slide as noted. Overall, this pistol rates in about Fine condition.

Mechanics: The action functions correctly. The double action trigger pull is a little stiff, and the single action pull has a small amount of creep. The slide is tight to the frame. We did not fire this pistol.

Box, Paperwork & Accessories: This pistol comes with one 8 round single stack blued magazine, a black leather top flap holster and bringback paperwork. The left side of the magazine is marked with “jvd” and “P 38” and the rear face is marked with an “Eagle / WaA706” Waffenamt and “jvd”, identifying it as having been made by Erse Nordbohmische Matallwarenfabrik of Czechoslovakia between 1942 and 1945. The body shows light wear and is sprinkled with spots of pinprick surface erosion. The floorplate shows marks from the magazine release and thinning on its front edge. The magazine is in about Fine condition. The holster was made for a Luger pistol and has a magazine pouch sewn to the front edge of the holster and a tool pouch sewn to the inside surface of the top flap. The back side of the holster is marked “C HEINICHEN / DRESDEN / 1939” and with an “Eagle / WaA142” Waffenamt. There are two thin belt loops sewn to the back of the holster and a leather strap sewn to the top flap for securing it to a buckle sewn to the rear edge of the holster. There is also a pull strap sewn to the inside of the holster for aid in removing the pistol from the holster. The holster shows multiple handling marks with thinning on the top flap, magazine pouch and the back side of the holster. The stitching is intact and the top flap hinge is not cracked. The holster is in about Good condition. There is a screwdriver tool in the top flap pouch that is marked with an “Eagle / 63” Waffenamt on one face identifying it as being made by Mauser (we needed a 20X glass to make out the numbers). The tool has a parkerized finish and is in about Fine condition. The bringback paperwork consists of an original War Trophy Certificate, an Owner’s Inventory and Customs Declaration and a letter from the niece of Technical Sergeant Martin Roback who brought the pistol back with him from WWII. The paperwork shows that T. Sgt. Roback served in the 275th Infantry Regiment and that he came back to the states in Sept. 1945. Also included is a copy of T. Sgt. Roback’s Honorable Discharge, a copy of a listing of his awards and citations, a copy of a picture of him in full uniform and an original photograph of him in field dress. The niece’s letter shows T. Sgt. Roback brought 3 pistols back with him, and that this was one of them. The Trophy Certificate and Owner’s Declaration are both yellowed with age and torn, but the writing is legible. They are in about Fair condition. The niece’s letter is in Excellent condition. The Army papers refer to the pistol as being a Luger, but we assume that this was because it was in a Luger holster.
Our Assessment: The P38 occupies a significant place in history. It was the first locked breech pistol to have a single action/double action trigger. After the start of WWII, Walther could not keep up with the production required, and production was ordered to commence at both Mauser and Spreewerke in 1940. By the end of the war, Walther had only produced about 580,000 of the 1.2 million produced. This pistol was built by Walther in 1941. It has all matching numbers except for the magazine, which is made by Nordbohmische and not serialized. The pistol is in about Fine overall condition with about 90% of its original finish remaining. There is thinning on its edges, pinprick surface erosion sprinkled over the front strap with a small spot at the left rear of the barrel, and light surface frosting sprinkled over the sides of the slide. There are also several light marks on the sides of the slide and a few small dings in the front strap. The reddish brown serrated plastic grips show a very few very light marks in the smooth areas and a few tiny dings in the serrations of the right grip. The bore is mostly bright with light wear in the rifling and light erosion throughout the bore. This pistol comes with a black leather holster made for a Luger made in 1939 and marked with a Waffenamt, and bringback paperwork. This package will be of interest to collectors of WWII and German weaponry. No collection of WWII small arms would be complete without a P38 made by each of the three manufacturers, and the Waffenamt marked Luger holster and bringback papers are icing on the cake.