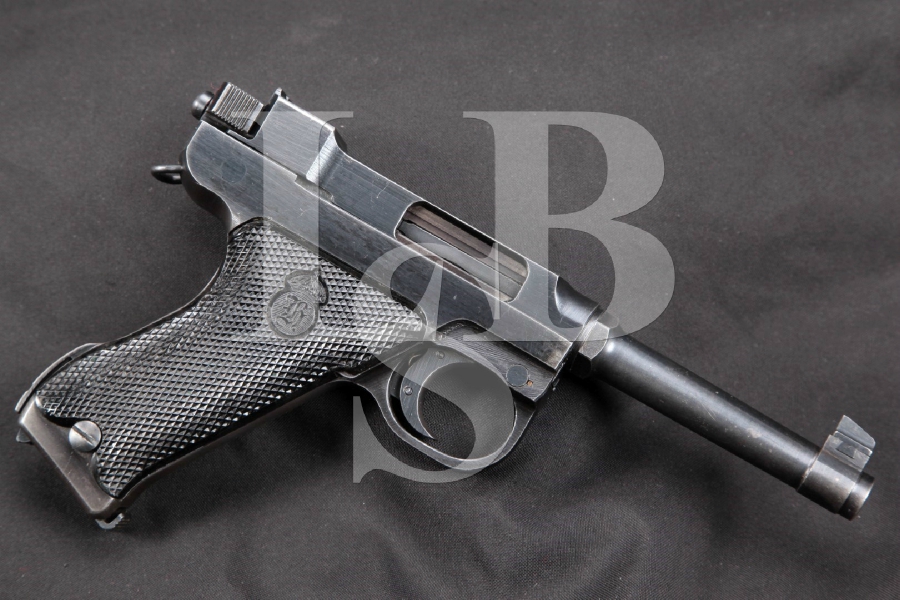 Barrel Length: The barrel is 4 ¾” in length.

Sights / Optics: The front sight is a blade with a vertical rear face that is dovetailed into a banded base on the barrel. The rear sight is a flat topped “U” notch fixed to the back of the receiver.

Stock Configuration & Condition: The grips are black checkered plastic with a crowned Husqvarna logo on both sides. The checkering is sharp with just a few tiny marks. The grips rate in about Excellent overall condition.

Bore Condition: The bore is gray with light wear in its pronounced rifling. There is extremely light erosion in the grooves.

Overall Condition: This handgun retains about 85% of its metal finish. There is thinning on the edges of the barrel, receiver and frame, and on the front strap and backstrap. There are several light handling marks scattered over the barrel, receiver and frame. The slide, safety and takedown lever serrations are sharp. The grip screw heads are sharp and the markings are clear with raised edges. Overall, this handgun rates in about Fine condition.

Box, Paperwork & Accessories: This pistol comes with a total of one blued 8 round magazine with a steel follower. The magazine shows minimal wear and is in Excellent condition.

Our Assessment: Please see http://candrsenal.com/pistol-swedish-lahti-m40/ and http://www.gotavapen.se/gota/m40/pist40_4.htm for more information on the M40 and its use by Danish forces than we can provide here. This is an interesting looking pistol with many Luger similarities, and is a direct descendant of the Bergmann-Bayard M1910 pistol. They were designed in Finland to work reliably in extreme cold weather and to be strong enough to handle the robust German submachine gun ammo that could be picked-up on the battlefield. Husqvarna began production in 1942 after acquiring a license from the Finns, and produced a total run of about 80,000 pistols. About 13,000 pistols were sent to Denmark during the war for use by Danish exiles and the Danish police forces. 10,000 were ordered and received by the Danish Police forces in the S/N range D5001-D16000 during 1944. This pistol is one of the 10,000 received by the Danish police force. It is in about Fine overall condition with 85% of its original finish remaining. It shows thinning on its edges and on the front strap and back strap. There are also several light handling marks scattered over the barrel, receiver and frame. The grips are checkered black plastic with sharp checkering and only a few tiny marks. The bore is gray with light wear in the pronounced rifling and extremely light erosion in the grooves. This pistol is correctly marked and in fantastic condition considering it was made in the latter days of WWII. This pistol should have high interest by WWII collectors and collectors of Swedish and/or Danish firearms.