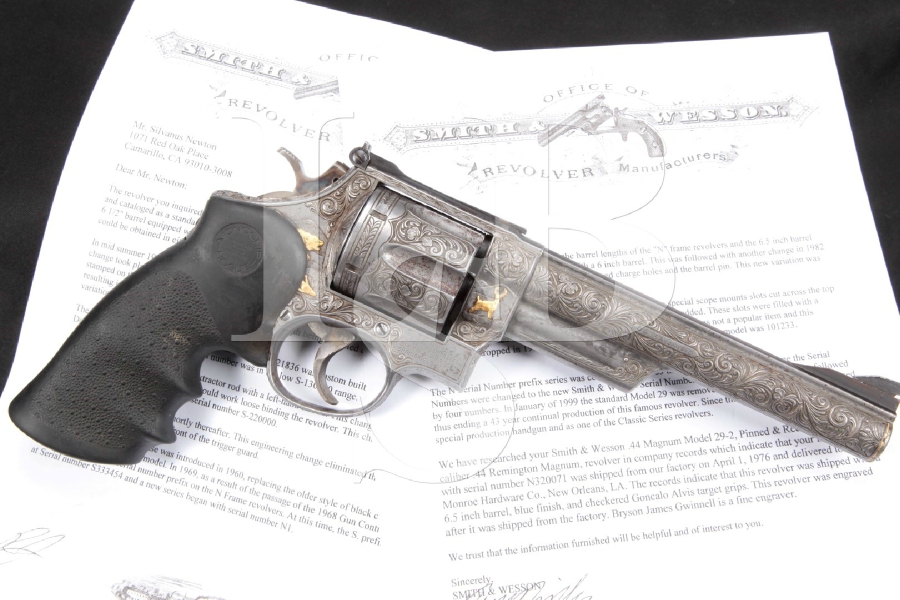 Sights / Optics: The front sight is serrated, ramped blade pinned to a raised serrated ramp set on a serrated solid rib. The blade does not set flush into the mount. The rear sight is an S&W micrometer click adjustable rear white outline leaf, screwed to the barrel, adjustable for windage and elevation.

Stock Configuration & Condition: The one piece neoprene Hogue Monogrips have three finger grooves and a speed loader cutout. Spots of significant wear and handling marks are visible on the grip which rates in about Very Good overall condition. The grips cover some of the engraving.

Overall Condition: This handgun retains about 15% of its metal finish. We cannot tell if the finish was stripped before engraving or is significantly worn. The exposed metal has developed a natural patina with handling marks and patches of oxidation visible. The case coloring on the hammer and trigger are visible and only mildly muted. The revolver was engraved by Byron James Gwinnell. The engraving is very deep and pronounced with signs of wear evident. Scrollwork covers most of the barrel and frame with a thin border along the top strap and top rib. A gold painted bobcat, coyote and crescent moon appear on the left side of the frame which a bear eating a doe while a buck looks on appears on the right side of the frame. A thin gold line encircles the muzzle. The back strap is distorted and a carved piece of wood is set against it to fill the curve, held by pressure from the grip. The front face of the grip frame is broken at the mainspring tension screw hole. Three shims have been forced between the spring and the front of the frame to apply pressure. The Hogue clip is held in place by part of a nail, which fits loosely in the grip frame and is prone to falling out when the grip is removed. The screw heads are moderately distressed. Overall, this handgun rates in about Poor condition.

Mechanics: The single and double actions function correctly, despite the bent, broken frame and the shimmed mainspring. This is a Square Butt, N Frame Revolver with recessed cylinder, pinned barrel, checkered Target Hammer and serrated Target Trigger. We did not fire this handgun. As with all previously owned firearms, a thorough cleaning may be necessary to meet your maintenance standards.

Box, Paperwork & Accessories: This revolver is accompanied by a letter on Smith & Wesson letterhead written by Roy G. Jinks and dated June 23 2015. The letter dates the revolver to April , 1976 and confirms the engraving was done post factory. The letter is in Excellent condition and is protected by a clear binder cover.

Our Assessment: This S&W Model 29-2 has seen some rough use. The grip frame is bent and broken with a piece of carved wood present to restore the shape of the backstrap. Little of the original blue finish remains, but the revolver is engraved by Byron James Gwinnell. Gwinnell apprenticed with S&W from 1969 to 1971, before operating his own engraving studio for two years beginning in 1974. He went to work for Colt in 1975, leaving to open another private studio in 1986. Gwinnell was awarded Best-of-Show at the National Firearms Engravers Guild Show in 1987. Byron James Gwinnell was hired by the Philadelphia Mint on February 26, 1990. We were told that this Model 29-2 was carried by a U.S. Marshall. The overall condition certainly suggests that this gun would have some stories to tell if it could. As it is, this is a fine Smith & Wesson revolver for someone who collects works by a variety of engravers.