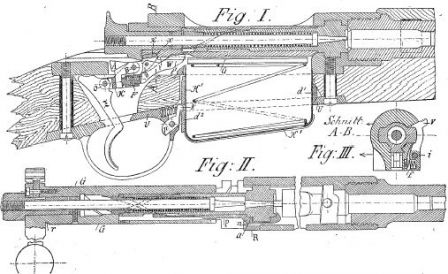 As we discussed in Evolution, Part 1, the process of evolution is a chaotic, often unpleasant business.  But, it is a nonetheless worthwhile process, (at least to those of us who live in the real world,) largely due to its ability to separate wheat from chaff, ore from slag, and gold from dross. It is not simply a matter of adding capricious value to the longevity which successful evolution conveys, it explains why that longevity exists, and the observable merits from which, if we have the wit, we may benefit.

So, evolutionarily, let’s take a look at the bolt action rifle.  Since the first bolt-action rifle was produced in 1824 by Johann Nikolaus von Dreyse, it has proven to be an enduring design; robust, reliable, and bet-your-life-on-it dependable.  It is also a very strong platform, with the potential for great accuracy.  Evolution has dictated that those virtues should keep the bolt-action rifle in a continuous process of production and refinement, to this very day.

Oh, sure; there are those who say that the design is dated, even outdated.  Once, it was the arbiter of the destiny of nations, as exemplified by the classic barracks couplet, “Underneath the starry flag, civilize them with a Krag…”, a reference to the imperial conquest of the Philippines, by troops armed with the bolt-action Krag-Jorgensen rifle.  As that superior technology was once whimsically explained by a student in one of my classes, “If you had it, you ruled; if you didn’t, you got schooled…”. The conquest of the 19th and 20th Century world by colonial powers, was driven by the presence of the bolt-action rifle, folks.

So, it has longevity; it also has utility.  Is the platform hopelessly outdated?  Consider the’Mad Minute,’ the British standard of efficacy of the longarm.  The first Mad Minute record was set by Sergeant Major Jesse Wallingford in 1908, scoring 36 hits on a 48 inch target at 300 yards.  In sixty seconds!  And that was with iron sights!   ThInk you could do that – with iron sights?  Heck, there are no shortage of shooters today, who would have a difficult time achieving that standard with the most modern and capable semi-automatic rifle, if similarly equipped.  Recall;  literally millions of men met their demise in the World Wars, at the hands of the ‘outdated’ design.  Indeed, to this day, there are Afghan tribesmen sniping at coalition troops, and one another, who eschew the AK series of Russian guns, preferring rather the greater accuracy and long-range potential of the “outdated” Lee-Enfield bolt-action rifle.

Most modern armies, when choosing a sniper platform, still select a bolt action rifle.  Sure, semi autos can be made to shoot nearly as accurately, but with limits as to caliber, and with that , limits as to capability.  And it is a lot easier to make a truly accurate bolt-action rifle then it is to build an equally accurate semi-auto.  While the AR platform can be massaged to have similar accuracy, it is at much greater expense, and it must be machined to such fine tolerances that the legendary reliability of the bolt gun is often absent.  Reliability In a semi-auto is dependent on bullet weight, powder charge, burn rate, spring tension, all potential semi-auto bugaboos.  In a bolt action gun, if you can stuff it up the spout you’re pretty much good to go.

Then, there’s the issue of safety.  If there is a catastrophic failure, which would you rather have next to your ear?  I have seen bolt guns with split barrels, and shattered forearms – but they all died heroes; the receiver was still intact.  I have seen semi-autos in complete flinders, with greater shooter remorse than the cost of a new rifle.

Equally seriously; there’s a reason that the bolt gun is still the choice of hunters world-wide. When hunting, would you face a charging grizzly with absolute confidence, if you were armed with an AR or AK?  Knowing you might get in one hit only, that would have to be in a caliber sufficient to the task, or you could end up as mucilage.  Serious game requires a serious caliber; semi-autos are constrained by the size of the magazine well, and the shape of the magazine itself.  The bolt gun can be provided in any caliber you’d like, with that safety and reliability equaled by no other platform.

I mentioned refinement as part of the process of evolution.  Modern manufacturing techniques have resulted in amazing strides forward on the gunmakers art; it is now possible to buy a Ruger All American or a Marlin XS, compete with a scope, for less than the cost of a monthly lease for some cars.

Even so, while plastic and stainless steel can make a modern, efficient rifle, relatively inexpensive rifle, a quality Remington 700, Sako, or pre-64 Winchester can be a work of sheer mechanical art, on a par with a Ferrari or a McLaren.

How many of us learned to shoot with a .22 bolt gun?  I did; and that emphasis on accuracy over volume has stayed with me, to this very day.  If there is a new, young shooter in your life, you can hardly provide a better introduction to the shooting sports than the likes of a chipmunk bolt action rifle.

Old or new, hunting, punching paper, or building the most amazingly accurate rifle in your safe, you’ll find what you need at Lock Stock And Barrel.