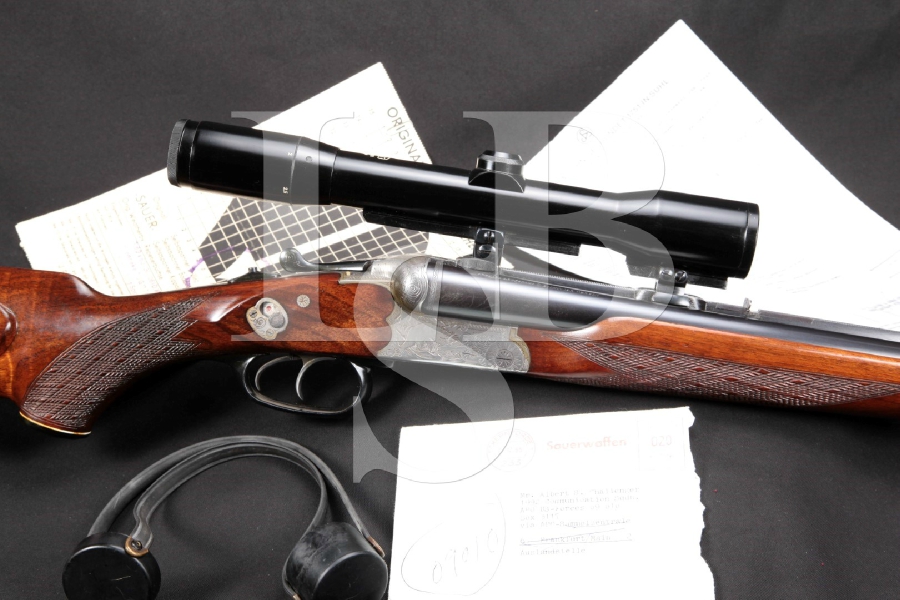 Caliber: The shotgun barrels are 12 gauge. The rifle barrel is .30-06 Springfield.

Action Type: The rifle barrel is below the double shotgun barrels. The action is a top lever break open crossbolt action. The there is a slider on the upper tang that selects the right trigger to fire either the firing pin for the right shotgun barrel or for the rifled barrel.

Markings: The left shotgun barrel is marked “J. P. SAUER & SOHN GEGR., 1751 IN SUHL / MADE IN WESTERN GERMANY / 12/30.06 SPRG.”. The right shotgun barrel is marked “SPEZIAL LAUFSTAHL BOCHUMER VEREIN” and with “BGV” in a circle. The undersides of all three barrels are marked “NITRO PROVED”. The underside of the rifle barrel is also marked “K / DL / 30-06” and “F4357”. The left side of the rifle barrel at the chamber is marked with an “Eagle / N” proof and “65” and the right side is marked with a circled “SS” logo and “30-06 SPRG.” in an oval. The bottom of the lug on the rifle barrel is marked “V”. The flats on the undersides of the barrels are marked “12/70 / 2 ¾”” and with an “Eagle / N” proof. The flat on the bottom of the right barrel is also marked “***” and “HALF CHOKE”. The top surface of the forend iron and the top left edge of the water table are marked “F4357”. The underside of the receiver is marked “ORIGINAL / SAUER” with a picture of a man holding a rifle in the center, and with a circled “SS” logo. The receiver is richly scroll engraved with a game scene of a moose on the left side and a grizzly bear on the right.

Barrel Length: The barrels are 23 11/16” in length with a full length top rib. The shotgun barrels are on the top with the rifled barrel below them.

Sights / Optics: The front sight is a brass bead dovetailed into the top of the barrel rib in a fore-aft slot. The rear sight is a folding leaf sight whose base is dovetailed into the barrel rib. The leaf is folded down flush with the top of the rib, and when raised will not stay up. The rear face of the sight is finely stippled to reduce glare and is marked “100”. There is a scope mounted to the top of the barrels’ rib using two offset ribs on the bottom of the scope instead of rings. The scope is marked “CARL / ZEISS” in an oval and “DIAVARI / 1.5-6X” and its elevation adjustment cap is marked “Made In Germany”. The reticle is a German post and the lenses are clear and free of distortion. The eyepiece turns freely to adjust the magnification and the serrated outer rim of the eyepiece can be turned to adjust for focus. There are several light marks on the scope’s body but only a single mark through the finish on the rear edge of the objective on the bottom left side. The scope is in about Fine plus condition.

Stock Configuration & Condition: The stocks are two piece fancy European walnut with a lacquered finish. The buttstock has a fiddleback pattern and is really beautiful so please see our pictures. The stocks are hand checkered with skip-line checkering with a pistol grip with a black plastic grip cap with white spacer, a cheekpiece on the right side of the buttstock for a left-handed shooter, and a vented brown recoil pad. The recoil pad also has white and black spacer, but they have been covered with lacquer when the stock was refinished, and are now brown. The top of the comb is arched down at the back, which technically makes in a Monte Carlo comb, since the middle of the comb is higher than at the rear, but there is no step, just a gentle arch. There is a latched cover in the belly of the stock, which covers four holes in the stock for storage of extra ammunition. The cover is left “In The White” and is scroll engraved. There is a sling swivel mounted in front of the latched cover and another on the bottom of the rifle barrel in front of the forend. There are a few light marks in the buttstock with two tiny dings in the right flat behind the receiver and a hairline crack in the flat at the edge of the receiver. The front edges of the flats are slightly dull. The forend also shows a few light marks scattered over its smooth surfaces. The checkering shows light wear with no mars. The wood to metal fit is excellent. The LOP measures 14 7/8” from the front of the forward trigger and 13 15/16” from the front of the rear trigger to the back of the recoil pad. The recoil pad is soft and supple, shows no marks and is in about Fine condition (it would be excellent except for the stain on its white spacer). The stocks rate in about Fine condition.

Bore Condition: The rifle bore is bright with light war in the rifling. There is no erosion. Our bore gauge measures a ME of 1.0. The shotgun barrels are bright with no erosion.

Overall Condition: This drilling retains about 92% of its metal finish. The shotgun barrels show a very few very light marks along their length and thinning on their sides at the receiver. The edges of the receiver, safety and upper tang are coated with lacquer from where the stock was refinished with the receiver attached. There are light scratches from sanding in the lower tang, giving it a dull look. The receiver engraving is immaculate with all of its fine detail still present. The knurling on the safety knob is sharp. The screw heads are sharp and the markings are clear. This rifle rates in about Fine condition.

Mechanics: The action functions correctly. The safety is on the right side of the wrist and the barrel selector is on the upper tang. The action on this gun is exceptionally tight. We took it apart to check the barrel markings and almost didn’t get it back together. We have seen new double barreled shotguns from the factory that weren’t this tight. The right trigger also is adjustable for trigger pull. The right trigger currently breaks crisply and is very light. Both hammers are of the rebounding type. We have not fired this rifle.

Box, Paperwork & Accessories: The attached scope is include. Also included is paperwork showing that the original purchaser was an Airman 2nd Class Albert S. Challenger and he was authorized to ship this drilling home from the Chateauroux Air Station in France on Aug. 12, 1966. The original invoice for this drilling and scope dated Dec. 9, 1965 is also included, listing their make, model, and serial number, plus the calibers of the drilling. Also included are two signed test target for the rifled barrel, shot at 100 meters. One shows a 3 shot grip measuring 0.90” center to center and the other shows a 3 shot cloverleaf hole measuring about 0.21” center to center. WOW! There is also a card showing performance of the shotgun barrels shot at 40 yards into a 30” circle: the left barrel scored 71% hits and the right barrel scored 65%. These patterns correspond roughly to FULL and IMPROVED MODIFIED, respectively, which differs slightly from our measurement of the bore diameter at the muzzle.

Our Assessment: The European hunting culture brought out a gun that like no other reflects the ingenuity and the art of gun making at its best: the drilling. This is a J. P. Sauer & Sohn Model 3000 Deluxe Grade drilling in 12GA and .30-06 Springfield. It has blued barrels while the receiver was left “In The White” and elaborately scroll engraved with game scenes on the sides of the receiver. This is an exquisitely made drilling with beautiful engraving and a fancy European walnut left-handed stock. There is even an engraved cover in the belly of the stock that when opened reveals four holes for storage of extra rifle ammunition. The gun is in about Fine condition with 92% of its finish remaining. It shows thinning at the rear of the shotgun barrels and sanding marks in the finish of the tang behind the trigger guard. There is varnish on the edges of the receiver, its upper tang and on the safety – it appears the rifle stock was refinished while still attached to the receiver. The wood shows only a few light marks. The bores are bright with no erosion and the rifling shows light wear. Our bore gauge measured a ME of 1.0. This action on this gun is very tight – we almost didn’t get it back together after taking it apart to record the barrel markings. This drilling was originally purchased by a US Airman while stationed in France in 1965, and comes with an original invoice from J.P. Sauer, a card showing the shotgun barrel test patterns and two test targets for the rifled bore – one showing a three shot cloverleaf hole pattern only 0.21” center to center when shot at 100 meters. The detail on this drilling is amazing, and it’s way too pretty to end-up with a shooter. Some high-end collector is sure to pick this up – if only because it looks so nice and is so well made. But – if you were left handed and wanted a single gun you could take into the field and bag whatever you came across from a partridge up to an elk, this would it.