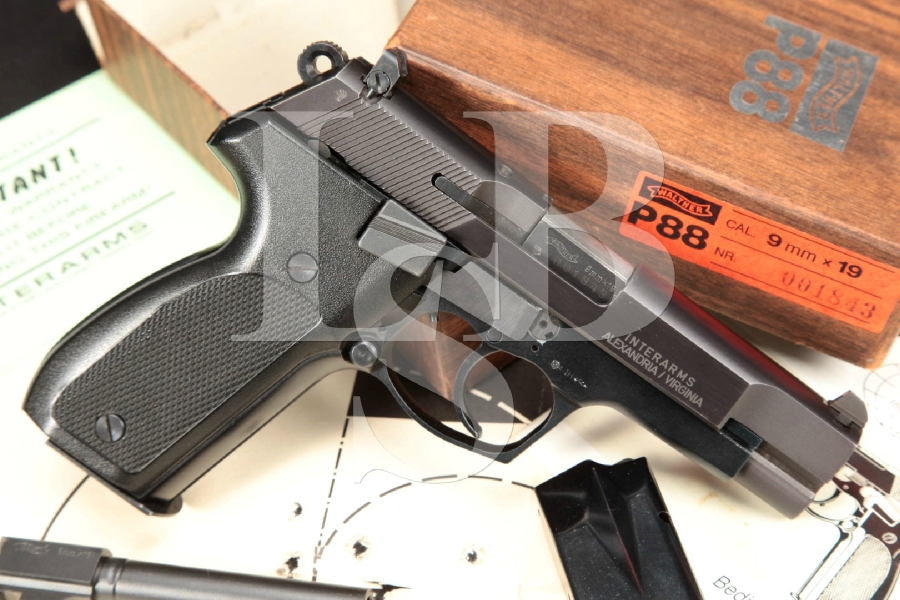 Sights / Optics: The front sight is a black blade with a bronze colored insert, dovetailed onto the slide. The rear sight is a flat topped, square notched base that has two countersunk dots and is adjustable for windage.

Stock Configuration & Condition: The grips are two plastic panels with checkering and smooth borders, displaying only very light storage marks. There are no major chips, cracks or losses. The grips rate in about Excellent overall condition.

Bore Condition: Two barrels are provided in this lot; The bores are bright and the rifling is pronounced and defined with very light scuff wear. There is no erosion in the bores.

Overall Condition: This handgun retains about 97% of its metal finish. There is some loss of finish on some areas of the metal surfaces from interaction during operation; namely the rails of the slide, frame, on the barrel and guide rod. The other surfaces only have very light scuff marks and sparse, shallow scratches, please see our photographs. The screw heads are sharp. The markings are crisp. Overall, this handgun rates in about Excellent condition.

Mechanics: The action functions correctly. The pistol features fully ambidextrous controls, a decocker, lanyard stud and a double stacked magazine well. The pistol has a very smooth double action and single action trigger pull. We did not fire this handgun. As with all previously owned firearms, a thorough cleaning may be necessary to meet your maintenance standards.

Box, Paperwork & Accessories: Two factory 15 round magazines are provided; one of the two has a rash of small compression marks and surface etching, with areas of blue appearing more ‘purple’ than not. The second magazine has lighter examples of the aforementioned; the two rating in about Very Good and Fine condition, respectively. THE MAGAZINES CANNOT BE SOLD OR TRANSFERRED TO CALIFORNIA RESIDENTS OR RESIDENTS OF STATES WITH HIGH CAPACITY MAGAZINE RESTRICTIONS, WHERE THIS CAPACITY IS ILLEGAL. Also included is a factory box that is serialized to the pistol. The box’s unlabled short end on the lid and box are ripped and have tatter marks, but are still connected; please see our photographs. The box has some wear and compression, rating in about Very Good condition. A spare barrel is provided retaining most of its blued surfaces with light wear marks from use. The bore is described above. A warranty and owner’s manual is included, both rating in about Fine condition. An original test target is included, marked “1843” rating in about Fine condition.

Our Assessment: From http://www.oocities.org/f-4g/ “Considered by many as the finest out-of-the-box 9mm combat pistol in the world, the P88 is a superbly engineered and exceptionally well thought out pistol.It is fully ambidextrous. The magazine release will push from either side. The decocker and slide release function on the same lever, again, both sides. Sights are click-adjustable for windage. This pistol was the first modern design from Walther that did not use the swinging-link lockup like the earlier P.38 and P5. Instead it uses a modified improved variation of the tilting-barrel concept invented by John Browning. Close tolerances and attention to detail eliminate any sloppiness or variation in the way the slide and barrel return to battery after each shot. This precise fit makes the P88 superbly accurate. Groups fired from a Ransom rest are well under 2″ at 25 yards. More than accurate for a service sidearm. For a pistol that has a double-column magazine, it is very comfortable for someone with average size hands. The grips are black checkered plastic, burled walnut grips are available for this model from Earl’s Repair Service. The finish is a deep, high-polished blue that is traditionally flawless from Walther. This pistol was discontinued in 1994, probably due to no contracts from government or police agencies because of its high price. Even a well kept used pistol often commands near-new prices. This pistol is in Excellent condition, with a spare barrel, two 15-round magazines (THE MAGAZINES CANNOT BE SOLD OR TRANSFERRED TO CALIFORNIA RESIDENTS OR RESIDENTS OF STATES WITH HIGH CAPACITY MAGAZINE RESTRICTIONS WHERE THIS CAPACITY IS ILLEGAL.) and the original factory box. A2 25 meter test target is provided, showing an approximate 9 round string, producing an approximately 3” group. These pistols are tightly held onto by their owners, since only about 10,000 were made and have high marks for accuracy and reliability. This is a rare chance to get a hold of a low serial number P88 with extras.