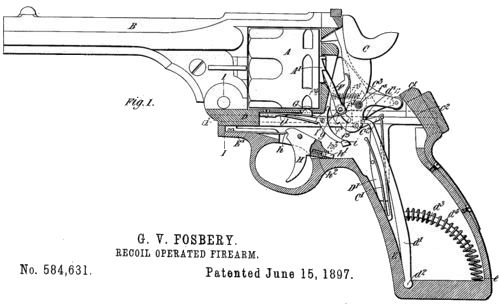 I’ve always been fascinated by the process of evolution.  Despite our best attempts to keep the world under control, Evolution is the thorn amongst the roses, the sudden gust of wind, the weeds in the perfectly manicured lawn of progress.

We try to shove it under the rug, because Evolution is a cruel taskmaster, and we want things to go Our Way.  But the truth is, Evolution does not follow an orderly process, which we humans wish to believe governs our daily lives.  Evolution is a random, bloody, chaotic process, which determines both our present and our future.  Evolution, simply, is a Bitch.  It does not reveal That Which Is Best.  It reveals, rather That Which Is Best Suited To Survive – within a given set of circumstances, at a given time.

Which brings us to – the Revolver.

We would like to believe that the orderly process of Evolution has led us from fists, to clubs, to swords, to bows, to single-shot black powder, to revolvers, to semi-auto pistols.

Now, with modern bullet designs, polymer plastics, cad-cam computer design, etc., we can leave the dusty old past behind.  No soldier would now charge off to war armed solely with a sword, in the modern world.  Those days are gone!  Put that sword back where it belongs, in a museum.  Similarly, with the advent of high capacity, semi-auto pistols, we can leave a spot in that musty museum for our antiquated revolvers, too, right?

But Evolution is a bit more complex than that.

Imagine; it’s 3:00 a.m.  You’re peacefully asleep, dreaming of…whatever you dream about.  Suddenly, there’s a noise downstairs.  You know your house and its inhabitants.    That sound Does Not Belong.  You grab the gun from your nightstand, grip it in an unsteady hand, and creep to your doorway.  You feel your sleep-addled mind fighting the adrenaline surge of genuine, heart-pounding fear.  As you cautiously open your bedroom door, it bangs in on you, knocking you back to the floor.  A menacing figure looms over you.

A couple of questions for you, here, in the comfort of your quiet computer reverie.  Did you grab your grandpa’s service 1911?  Great gun.  Now, let’s see.  It looks scary with the hammer back, even with the safety on.  Did you put the safety on?  In crisis drills, I’ve seen literally dozens of experienced shooters yank back on that trigger until it was practically bent, waiting for the Boom That Never Came.  Don’t forget to toggle the safety off, cowboy.  Will you remember to do that in a crisis?  Maybe you decided to leave the chamber empty.  Keep squeezing that trigger, Horatio, but that gun is a paperweight, until you free up your other hand, and cycle the action.

I have no shortage of friends who prefer modern polymer-framed pistols.  That ticklish trigger thing, though… they’ve seen Youtube videos of people shooting themselves in the whatever, because there was a soft trigger, and a hard bang.  Holstering it, caught in a death grip, flushed with adrenaline, it will go bang with 3 1/2 pounds of pressure, so many choose to leave that chamber empty, until the moment of crisis…

Now, as a firearms instructor, I deal a LOT of new shooters; more, every day, as we face threats which our ancestors never anticipated.  These new shooters like the safety and comfort that having a pistol nearby provides them.  They have made the Warrior’s Choice; in a SHTF scenario, they may go down, but they will go down swinging, defending themselves, and their loved ones.  May of them are older people, with a sprinkling of young wives and girlfriends thrown in.  In our increasingly urbanized society, they did not grow up around guns.  They don’t have great familiarity, the resources, or the ability or facilities to undergo constant, repetitive training.  But they want a gun that will work, to defend them.

See, that’s where the Revolver comes in, folks.  Revolvers are perfect for them. All they do is work. Oh, I know they’re not as rakish and sexy as the latest in cutting semi-auto pistol designs.  Revolvers are like beards, or blue jeans; old school.   Like the all-time fight-stopping round, the hoary  .357 Magnum.  Which is, by the way, a revolver round.

Evolution has proven this; a Revolver just flat works.  Take some time; learn how to use it .  Be safe, be sure, be accurate.  But, once a crisis situation comes along, this is all that  you need to remember:  Point the gun at the intended target.  Pull the trigger.  Repeat, as needed. Heart pounding?  Point and shoot.  Hands sweaty?  Point, and shoot.  If you bought a quality revolver, you just bought yourself six, seven or more chances to live through this.

The beauty of the Revolver is in not only its elegant simplicity, but the process of evolution, as well.  Revolvers date back to before Samuel Colt, whittling a wooden model on a long, boring sea voyage.  The process of evolution means revolvers have been winnowed, tested, forged in the crucible of crisis, and refined to where they are, today; nearly perfect.  Soft grips cushion recoil.  Modern frame designs point the gun naturally,  in the correct business direction, to get you started.  Point, and squeeze.

Simple.  Elegant.  Pretty much idiot-proof.  Grandma doesn’t have to remember the 1911 manual of arms.  Girlfriend doesn’t have to come out to every action pistol match, to master the intricacies of safety engagement, clearing a jam, stripping a stovepipe, or managing a magazine change, under fire.

Evolution.  It can be a wonderful thing.

We have revolvers, here at Lock Stock And Barrel, where a little bit of Evolution can mean the difference between life, and death.