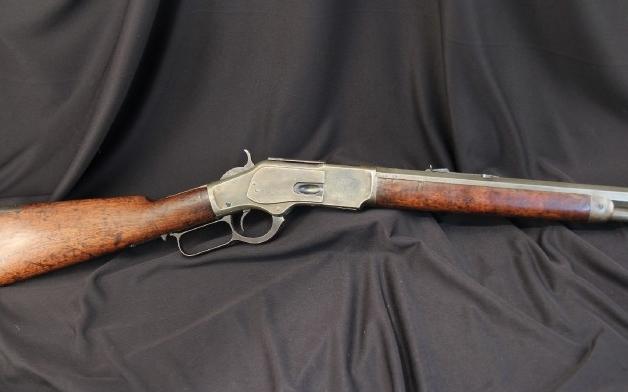 Make: Winchester
Model: 1873
Year of Manufacture: 1885
Caliber: .44-40 WCF
Action Type: Lever Action Rifle
Markings: The barrel is marked “Winchester’s Repeating Arms New Haven Ct. / King’s Improvement Patented March 29 1866 October 16 1860” and “44 Cal.”. The upper tang is marked “Model 1873”. The serial number is found on the lower tang and “44 Cal.” is on the underside of the carrier. Both sides of the frame have been engraved “WRA CO.” (Reminiscent of the monogram seen on the 1887). The left side of the barrel is marked “N 207” and the right side is marked “H.O.P. 6714”. The underside of the frame is marked “20th / Fox”. The left side of the stock is marked “W. C. Co.”.
Barrel Length: 24”
Sights / Optics: The gun is mounted with a dovetail set front blade and a dovetail set leaf and elevator rear sight.
Stock Configuration & Condition: The stocks are original, with a varnish finish. There are small losses to the wood at the wrist and general handling marks and depressions throughout. The wood shows appropriate age under the finish. The LOP measures 12 ¾”. The stocks rate in about Very Good overall condition.
Type of Finish: Blue, Now Gone
Finish Originality: None Present
Bore Condition: The bore is somewhat dark and the rifling is visible the entire length, though a bit worn. There is erosion and scattered pitting present. The chamber has been reemed, apparently for use of blanks or 5 in 1’s, though it will still shot 44-40 just fine.
Overall Condition: This gun retains about 5% of its metal finish. The balance of the finish shows cleaned surfaces and a light patina forming. There are light tooling marks, primarily on the underside of the frame, apparently from the cleaning. These are faint. The metal otherwise just shows scattered nicking and light erosion and is in quite good condition. The Screw heads are worn but serviceable. The markings are clear. Overall, this gun rates in about Very Good condition.
Mechanics: The action functions as designed and feels good. We have not test fired this rifle.
Our Assessment: This gun should have a lot of appeal on its own merit. The metal is smooth, there are only a few areas of erosion and the gun is both pre-1899 and in the favorite .44 WCF caliber. Add to this the fact that the gun came from one of the Famous Hollywood Studios. The gun has interesting markings, certainly worthy of further research, but the gun does come with some interesting information. We have this Winchester on consignment from the former owner of the famous Kings Gunworks (now Gun King’s Armory). When he bought the shop from the Capones, this rifle was included in inventory ¬with a repair hang tag that the gun belonged to John Rhys-Davies (Sallah from Indiana Jones). The story accompanying the rifle was that Mr. Davies was planning on returning to England with this rifle, and the repair order was to deactivate it. Apparently Mr. Davies left for England without the rifle, leaving it in the King’s inventory. Being that King’s is about 20 miles from 20th Century studios, this is the place Hollywood took their guns. What an interesting piece!