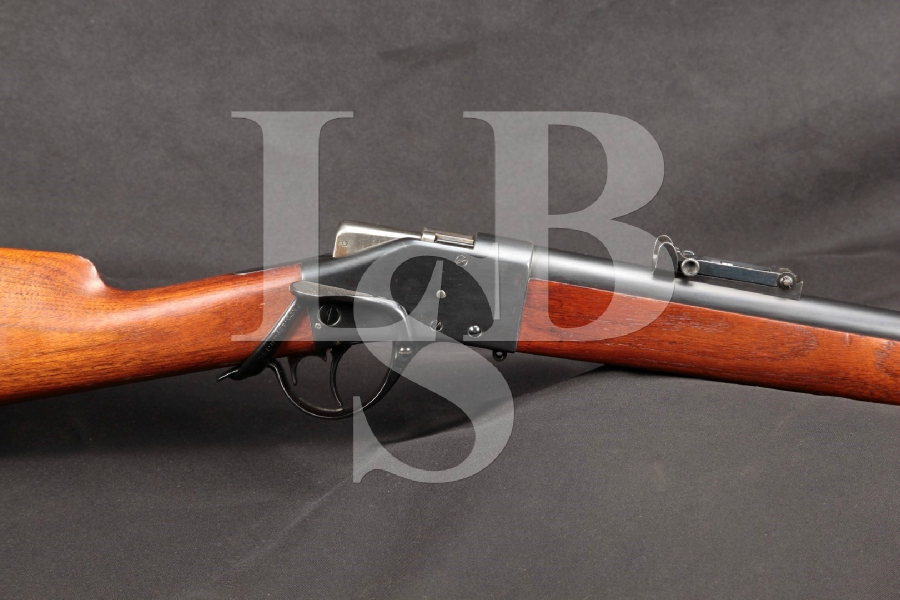 Sights / Optics: The front sight is a short blade on a rectangular base fixed to the barrel. The rear sight an elevator sight fixed to the top of the barrel. The elevator has fine adjustments for both windage and elevation (the windage adjustment is on the elevator, not the base of the sight). The sight has a “V” notch and the elevation is controlled by a thumbscrew in the center of the elevator. The right side of the elevator is marked “100 2 3 4 5 6” with hash marks from 50 to 600 yards. The left side of the sight base is marked “PAT 22681-05 / P PAT 24019-10”. This sight was made for a Martini Model 310 Cadet rifle.

Stock Configuration & Condition: The stocks are two piece walnut that have been refinished with a lacquered finish. The buttstock has a straight grip and a blued checkered steel carbine type buttplate. The forend runs to within about 6 ½” of the muzzle and is secured with two steel barrel bands. The underside of the forend and its blued steel nosecap is grooved for storage of a cleaning rod (not included). There is a small oval plate on the underside of the forend just in front of the receiver that looks like it could be a filler for an oval inlet for a sling swivel, and the forward barrel band has a hole at the bottom for attachment of a sling swivel. The forend shows several compression marks with a few large bruises/scrapes in the finish of the rear section. There is also a thin scrape through the finish in the middle section at the left front of the rear barrel band. There is a scrape in the finish at the top of the grip, scratches on the left side of the grip, and several small bruises scattered over the rest of the buttstock. The LOP measures 13 ¾” from the front of the trigger to the back of the buttplate. The buttplate checkering shows light wear, tending to moderate wear at the toe. There are very light wear marks under the finish at the heel and toe with thinning at the heel. The buttplate is in about Fine condition as re-finished. The stocks rate in about Very Good condition as re-finished.

Type of Finish: The rifle is blued. The lever has a black painted finish.

Finish Originality: This rifle has been professionally restored.

Bore Condition: The bore is bright, tending to gray at the muzzle. There is light wear in the rifling and light erosion near the muzzle.

Mechanics: The action functions correctly and appears very solid. The trigger pull is crisp. The rifle has a unique safety, which looks like a rear trigger. It is engaged when the lever is opened, and must be slid rewards before the trigger can be pulled. We have not fired this rifle.

Our Assessment: From Wikipedia: “The Sharps-Borchardt rifle was designed by Hugo Borchardt who became more famous in later years for his automatic pistol as well as the basic design for the Luger pistol. The hammerless Borchardt design came out too late to participate in the great bison slaughter, and as a consequence didn’t sell very well. Three variants were produced: Military, Sporting, and Express. The Military Sharps-Borchardt was made only in .45-70 with 32″ round barrels, whereas the Sporting and Express models were offered with octagonal barrels of varying lengths and calibers. The Military version was purchased by the Militias of the states of Michigan, North Carolina, and Massachusetts, and was also sold to foreign countries. About 6900 of the Military version were produced. Notwithstanding its lack of commercial success, the Sharps-Borchardt is admired for its strength and accuracy: reputed to be one of the strongest if not the strongest rifle action ever built before the 20th century. The gun was revolutionary at its time for its use of coil springs as opposed to flat springs.”. This Sharps-Borchardt Military Rifle has been professionally restored, and the rear sight was replaced with an elevator sight from a Martini Model 310 Cadet Rifle. The markings were kept intact except for the serial number on the underside of the receiver, which has been ground off. The rifle has about 96% of its current finish remaining. There are a few marks through the finish at the front of the barrel, with light pitting and a few marks under the finish. The receiver shows a few light scratches and a spot of thinning on its sides and a spot of surface loss and grind marks on its underside. The stocks show several compression marks and scrape marks in the finish. The bore is bright with light wear in the rifling and light erosion near the muzzle. d. Still, the action appears tight and the bore is very shootable. Due to the scarcity of these rifles, they have become very collectible, and this one should as well. If the collectors of antique military weapons and single shot rifles of the 19th Century don’t show enough interest, it will still give someone a nice looking vintage single shot rifle with military sights that can be used for hunting or target shooting.