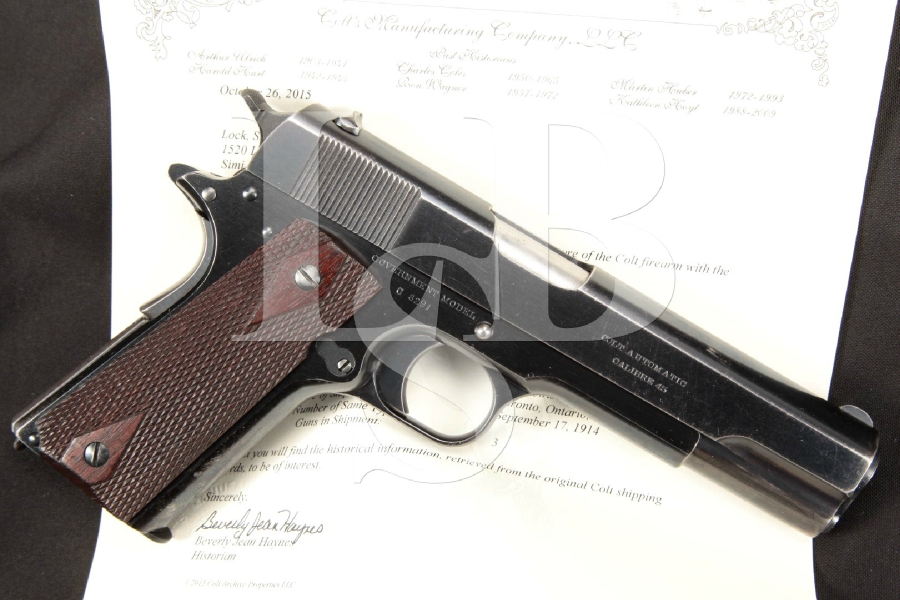 Sights / Optics: The pistol is mounted with a ”U” notched rear sight dovetailed into the slide and a rounded blade front sight fixed to the slide.

Stock Configuration & Condition: The grips are checkered walnut “double diamond”. The grips show oil staining and light marks on the lower shoulders of the grips. The checkering shows light wear that is tending to moderate wear along the front edge of the right grip. There are no chips or cracks noted. The grips rate in about Fine condition.

Type of Finish: This pistol has a blued finish.

Bore Condition: The bore is gray and the rifling is sharp but shallow. There is light erosion in the grooves the length of the bore.

Overall Condition: This pistol retains about 70% of its metal finish. There is surface loss on the underside and edges of the slide, grip safety and mainspring housing. The edges of the frame show thinning. There are light handling marks on the slide, trigger guard and front strap with a few tiny nicks through the finish at the very top of the front strap. There are scratches in the finish on the left side of the frame from the safety and a few tiny nicks in the bottom right edge of the frame above the trigger. There are also a few tiny spots of surface frosting sprinkled over the top and left side of the slide. The slide and magazine release and the safety checkering is sharp to the touch. The hammer knurling shows light wear and the recoil spring plug checkering shows light wear around its outer edge. The slide serrations are sharp. The grip screws show light marks from a screwdriver. The markings are clear. Overall, this pistol rates in about Very Good condition.

Mechanics: The action functions correctly. It has both a manual and grip safety and the trigger pull is crisp. The slide is tight to the frame. We did not fire this pistol. The pistol has a lanyard ring on bottom of the mainspring housing.

Our Assessment: The 1911 and 1911-A1 pistols served the military of the United States from 1911 to 1985, through two World Wars and the Korean and Vietnam wars. They gained a reputation as a reliable handgun with plenty of stopping power, and are held in high regard by those who have used them. This commercial Colt 1911 was made in Sept. 1914, just after the start of WWI in Europe but before the United States entered the war in 1917. It is in about Very Good condition with 70% of its original finish remaining. It shows surface loss on the underside of the slide, the edges of the slide, the grip safety and the mainspring housing, and thinning on the edges of the frame. There are light handling marks scattered over the slide, trigger guard and front strap, with a few on the sides of the frame. The grips a few light marks on their bottom shoulders and light wear in the checkering, tending to moderate wear along the front edge of the right grip. The bore is gray with sharp but shallow rifling. There is light erosion in the grooves the length of the bore. The pistol comes with a letter from Colt showing it was shipped from their factory to Toronto, Canada, and the bottom of the grip has an import mark from DEAC in New Hampshire. an. There are also a few spots of pinprick surface erosion on the slide and right rear of the frame. The slide is tight to the frame and the bore is very shootable. This early Canadian Colt should be a big hit with the collectors out there. We see lots of Colt 1911’s, but very few with this low of a serial number that started out their life in Canada.