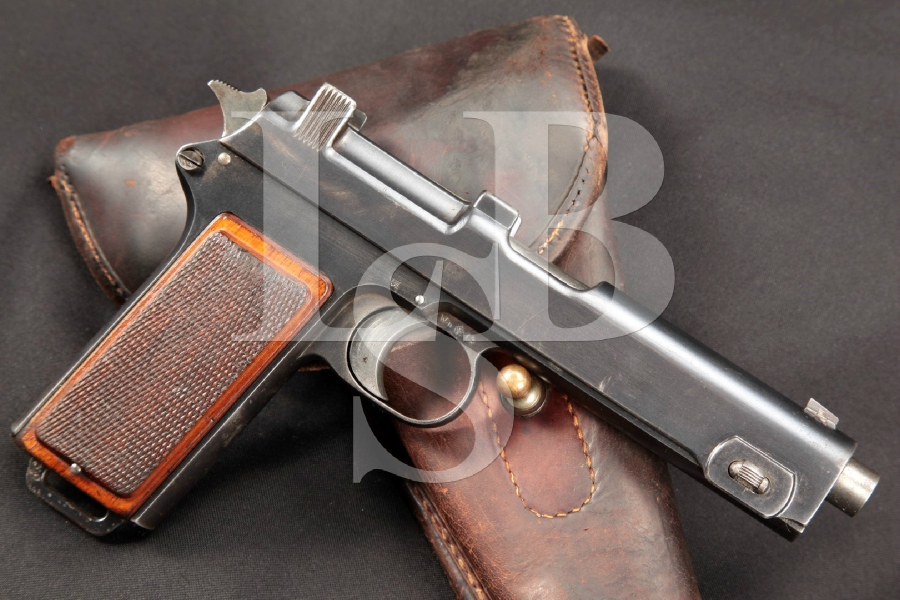 Year of Manufacture: The pistol was originally made in 1914 and rechambered to 9mm Parabellum ca.1938 after Germany annexed Austria.

Stock Configuration & Condition: The grips are checkered walnut that show compression marks on their bottom surfaces and oil staining. The checkering shows light to moderate wear without mars. The grips rate in about Very Good to Fine overall condition.

Bore Condition: The bore is mostly bright and the rifling is sharp. There are a few tiny specs of frosting near the muzzle.

Overall Condition: This handgun retains about 75% of its metal finish. There is a strip of pinprick surface erosion on the top of the slide, a few isolated spots on the sides of the slide and a sprinkling over the extractor and front strap. There is thinning on the edges of the slide, and on the front strap and backstrap. There are also light marks through the finish on the underside of the frame, trigger guard and front strap. The bottom of the lanyard ring shows multiple tiny dings in the metal. The safety, slide and slide release serrations are sharp and the hammer serrations show light wear but are still sharp to the touch. The markings are clear. Overall, this handgun rates in about Fine condition.

Mechanics: The action functions correctly and the slide is tight to the frame. We did not fire this handgun.

Box, Paperwork & Accessories: This pistol comes with a brown leather top flap holster. The holster is made from two pieces of leather sewn together with the bottom piece folded over to the front to form the top flap. There is a large brass stud on the outside of the holster for securing the top flap, but the strap that secures it is missing. There is a small pouch with a separate flap sewn to the outside of the holster under the top flap, but the stitching has all come undone around the bottom of the pouch and its flap is torn along the top edge. There is a single wide belt loop sewn and riveted to the back of the holster. The stitching along the rear edge of the holster has come loose and the leather trim around the edges of the leather is worn through and missing in spots. The leather shows oil staining, a few light scrapes in the leather and surface cracks along the fold in the top strap. The holster is in about Fair condition.

Our Assessment: From http://www.guns.com/2013/05/01/the-austrian-steyr-hahn-m1912-pistol-like-if-picasso-drew-a-1911-video/: “Czech inventor and firearms engineer Karel Krnka, father of a number of interesting rifle and pistol designs, along with help from others worked out the development of what was to become Steyr’s 1912 pistol. Because the pistol was similar to his earlier striker fired Model 1907, many started referring to the new pistol as “Steyr-Hahn”, Hahn meaning Hammer in German, to differentiate between the two designs. By 1914, the new Steyr pistol was in service with the Austrian Army just in time for WWI. The Bavarian Army bought 16,000 of them during WWI and after Germany annexed Austria in 1938, some 60,000 existing 1912’s were rechambered for use with the 9mm Parabellum cartridge.”. This pistol is one of those rechambered for use with 9mm Parabellum ammo, and has an Eagle holding a globe with swastika with an “L” below it and to the right on the right side of the frame, which is a German police inspection stamp. The pistol was originally made in 1914 and rechambered in about 1938. The pistol is in about Fine condition with 75% of its finish remaining. It has a strip of very light pinprick surface erosion down the top of the slide, a sprinkling of pinprick surface erosion over the front strap, and a few isolated spots on the sides of the slide. There is thinning on the edges of the slide, front strap, and backstrap, with a few light marks through the finish on the underside of the slide and front strap. There are multiple small dings in the lanyard ring on the bottom of the butt. The checkered walnut grips show compression marks on their bottom surfaces. The checkering shows light to moderate wear without mars. The bore is mostly bright with sharp rifling. This pistol is in fantastic condition for having survived both world wars, and comes with a vintage leather holster. There were only about 60,000 Steyr-Hahns converted to 9mm Para. for police use, and far fewer are still in existence today. This rare variation should be a big hit with collectors of WWI and WWII pistols and those used by the Germans in particular.