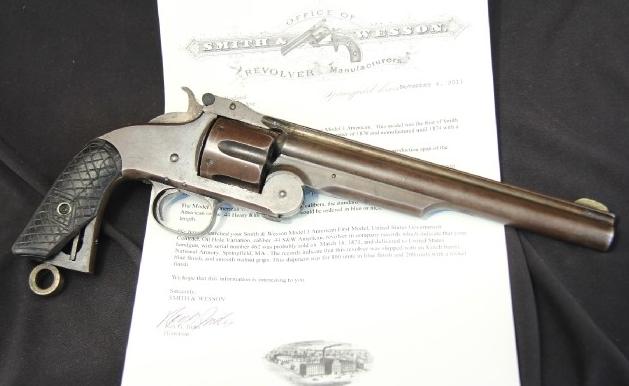 Make: Smith and Wesson
Model: Model 3 American First Model, Oil Hole Variation
Serial Number: 462
Year of Manufacture: 1871
Caliber: .44 S&W
Markings: The top of the barrel is marked “Smith & Wesson Springfield Mass. U.S.A. July 10. 60. Jan. 17. Feb.17. July 11. 55. & Aug. 24. 69” and “US” . The bottom of the grip frame has a stud drilled over the numbers, this stud was added for a lanyard ring. The only number clearly visible is “2” just to the right of the stud. The right grip panel is stamped “462”. The letters “V4” are found on 1) the latch and 2) the right immediate flat of the latch. There is an “A” barely visible but present on 1) the left barrel topstrap latch, and 2) on the left frame above the trigger guard. There is a “P” on the right side of the barrel ahead of the hinge.
Barre Length: 8” . There is an “OIL Hole” in the bottom of the barrel assembly in front of the hinge.
Stock Configuration & Condition: The grips are wood. The right grip panel is cross hatched and is missing a large chip. There is an addition crack running lengthwise from the top of the grip to the screw hole. The left grip panel is smooth and has the beginning of the same carving (apparently by the same hand, only not complete as the right panel) on the bottom. It appears that this cross hatching was a “work in process”. The left panel has a small loss at the bottom front. The grips rate in about good for the left panel and fair for the right panel. “462” is stamped on the inside fo the right grip panel.
Type of Finish: Blue
Finish Originality: All Original
Bore Condition: The bore is brown patina and the rifling is sharp. There is light erosion in the grooves and lands.
Overall Condition: This gun retains about 20% of its metal finish. There is still some original blue in the protected areas, such as behind the firewall, and the bottom of the frame ahead of the trigger guard. There is some blue on the left side at the hinge. The frame has a nice brown patina color, while the barrel has turned more of a gray. There are nicks and scratches and mild pinprick erosion, mostly on the frame and hammer. The barrel metal is mostly smooth with some discoloration on the underside of the rib. The gun has a very pleasant appearance with a moderate patina throughout. This gun is as honest as could be. The screw heads are serviceable, showing some use and minor wear. The markings are clear on the barrel and grip but, though obscured on the grip frame. Elsewhere, all markings are legible though lightened by the patina. Overall, this gun rates in about Good condition.
Mechanics: The action functions somewhat correctly: the hammer cocks back and locks and the cylinder rotates, the trigger drops the hammer. The lockup is a little loose with some wobble. The top latch can be manipulated manually but it does not “spring return”. The sliding knurled bar on the bottom of the frame must be pushed toward the rear and the latch must be lifted to open the action. Once fully opened, the same bottom bar must be pushed in the opposite direction to close. We believe this to be caused by either age weakened springs or dried grease and oil. The ejector spring is weak or missing.
Box, Paperwork & Accessories: There is a factory letter provided with this gun stating: “We have researched your Smith & Wesson Model 3 American First Model, United States Government Contract, Oil Hole Variation, caliber .44 S&W American …with serial number 462… and was probably sold on March 16, 1871 and delivered to United States National Armory, Springfield MA. The records indicate that this revolver was shipped with an 8 inch barrel, blue finish, and smooth walnut grips.”.
Our Assessment: WOW!! An original US property marked Model 3 Oil Hole variation that letters!. This is a true collector find. The Smith & Wesson Number 3 American was the first cartridge revolver adopted by the U.S. military. See pages 90-93 of the “Standard Catalog of Smith and Wesson” by Supica and Nahas. This gun is listed and identified as one of the 1000 U.S. American serial numbers, and the letter confirms it. This gun has all of the correct distinctive markings for the U.S. purchase. This gun is real! Here is a rare chance to own an even rarer gun. Don’t let this one get away.