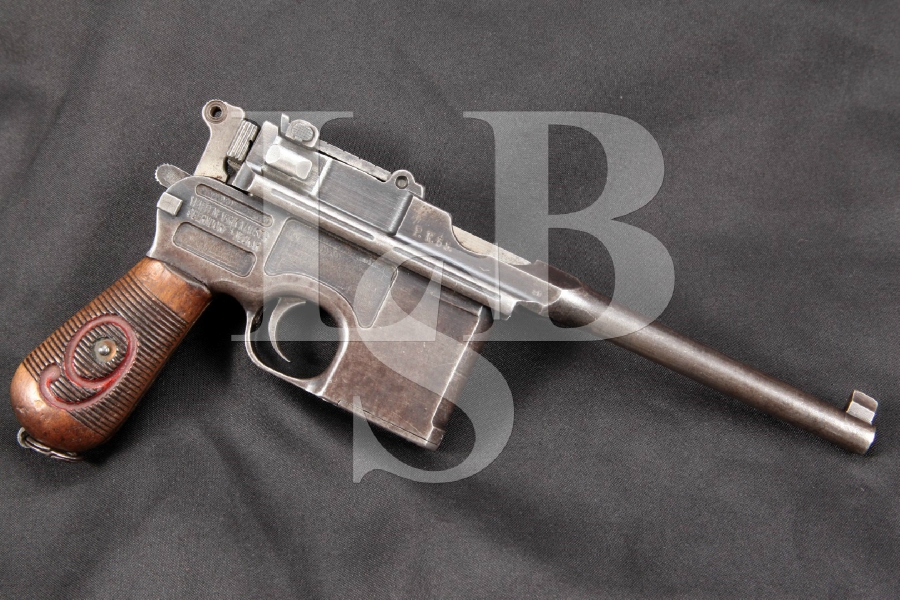 Make: Mauser of Orberndorf on the river Neckar

Sights / Optics: The front sight is a fixed blade that is set into the front of the barrel. The rear sight is a V notch atop a late model sliding elevator that is correct to the Prussian contract, with 50 to 500 yard adjustment marks.

Stock Configuration & Condition: The grips are dark stained walnut panels with 26 grooves, branded with the number “9” which is colored red. The panels have compressions, scratches and scuffs throughout. The grips rate in about Very Good overall condition.

Bore Condition: The bore is dull and the rifling is clearly defined with some wear. There is pin-prick surface erosion the length of the bore.

Overall Condition: This handgun retains about 32% of its metal finish. The finish is worn and thinning on the barrel, frame and smaller components. There is wear on the interacting metal components. Areas of exposed metal have a brown patina as photographed. The pistol has rough finishing, as is indicative of Prussian contract Mausers. The grip frame screw head is lightly tooled but highly serviceable. The markings are crisp. Overall, this handgun rates in about Very Good condition.

Our Assessment: This is a 1916 Prussian Contract Mauser of Oberndorf (on the Neckar river) with all matching numbers and a very strong action. The slide has a unit designation of “P.R. 55” and having been produced during the First World War, it probably has a very interesting history. It has a late trigger, 2-lug firing pin (serial numbers 35,000 and on), extractor (40,000 and on), New Safety marking and small ring hammer. The grips panels feature a red number 9 relieved into the walnut grip panels, that have 26 grooves. From http://askmisterscience.com/1896mauserbackup/index.html : “Guns for this contract were made from 1916 to 1918. The popular modern term is Red 9. This was a wartime military contract for 150,000 guns, perhaps 137,000 of which were delivered before the contract terminated with the end of the war. Despite occasional statements to the contrary, these were not prewar guns reworked to 9 mm. Except for the relatively poor finish, they are identical to the Wartime Commercial, with these specific exceptions. 9×19 mm caliber rather than 7.63 mm , 50-500 meter tangent sight, Small clearance relief cut out of top of cartridge follower, 24 (approximately) groove walnut grips panels, usually with a “9” carved or branded in and painted red, Government acceptance mark on right side of barrel, over chamber (Note that the presence of a Government acceptance stamp is not diagnostic of the 1916 Contract. Any gun bought by the government might have that mark. I have seen it on Prewar Commercials which were otherwise unmarked and unmodified – and were still chambered in 7.63 mm)”. This pistol is chambered in 9mm, is a C&R and one can legally purchase and utilize a wooden shoulder stock! Please see our eBay auctions, as we receive these stocks from time to time. The bore is shootable, but the collectors will probably want this one.