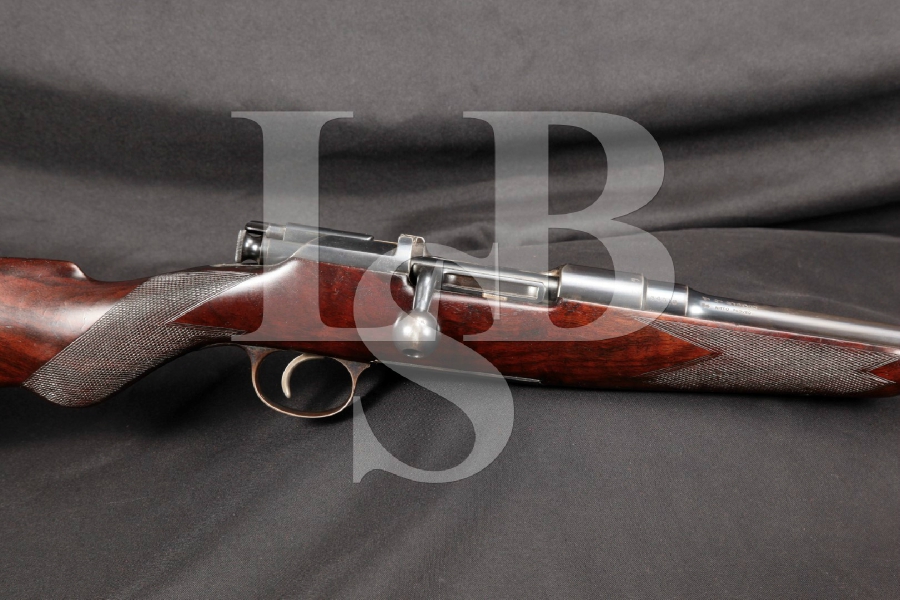 Make: We think this rifle was made in Belgium using a Steyr Mannlicher Schoenauer Receiver

Action Type: Bolt Action with Internal Rotary Magazine. The receiver is an M-S type that is split at the top with a wing safety on the bolt, a button on the right side of the receiver for use in emptying the magazine and an M-S button style bolt release on the left side. The bolt handle is forward, like those on the M-S actions, but has a large round knob instead of a flat butter knife shape.

Barrel Length: The barrel is 25”in length.

Sights / Optics: The front sight is a steel bead dovetailed into a fore-aft slot in a tall base at the front of the barrel. The rear sight is a 3 leaf sight dovetailed into a boss on the barrel. The leafs have wide shallow “V” notches in their tops with a thin vertical white line at the bottom of the “V” for an aiming point. The front two leafs fold, and are marked “100 YDS” and “200 YDS” on their rear faces while the rear left is fixed and is marked “100”.

Stock Configuration & Condition: The stock is one piece checkered walnut that has a pistol grip with a rounded bottom. There is a blued steel shotgun style buttplate on the butt, a sling swivel stud in the belly, and a lug on the bottom of the barrel in front of the rear sight with a hole for a sling swivel. The forend extends only 5 ¾” past the front of the receiver and has a smoothly rounded tip ending just in front of the checkering. There is oil staining throughout, which is heaviest in the checkered areas. The stock shows numerous light marks. There are also several tiny dings in the belly and several small dings in the buttstock, the deepest being on the left side at the front of the comb. There is also a compression marks on the underside of the forend at the left edge of the magazine floorplate. The hand cut checkering shows moderate wear with a few tiny mars in the forend area. The wood to metal fit is excellent and there are no cracks or chips. The LOP measures 13 3/8” from the front of the trigger to the back of the buttplate. The buttplate shows surface loss and several light handling marks. The buttplate is in about Very Good to Fine condition. The stock rates in about Very Good Plus overall condition.

Bore Condition: The bore is mostly bright, turning gray in the grooves at the muzzle. The pronounced rifling shows moderate wear. There is no erosion in the bore.

Overall Condition: This rifle retains about 82% of its metal finish. The barrel shows a few tiny marks through the finish and several light handling marks, with an area of scratches on its underside just in front of the forend. There is thinning on the edges of the sights and their bases, the barrel from the rear sight to the receiver, the edges of the receiver and magazine floorplate, and the bolt knob, with surface loss on the trigger guard and bolt release. The trigger guard is also developing a plum colored patina. The screw heads are distressed and the markings are clear. Overall, this rifle rates in about Fine condition.

Mechanics: The action functions correctly. This rifle has a push button magazine release on the right side of the receiver that pulls back the small lip that holds the cartridges in the rotary magazine, allowing the gun to be unloaded without cycling the bolt. There is a wing type safety on the back of the bolt. The trigger breaks crisply at 3 lbs. 4 oz. We have not fired this rifle.

Our Assessment: The Mannlicher Schoenauer rifles were very popular in Europe. The smooth action and rotary magazine that allowed loading of single cartridges set them apart from other rifles of the day, and the design was used in both sporting and military rifles. The 6.5x54mm MS cartridge was developed by Steyr as a hunting round with a high ballistic coefficient, which gave it excellent penetration. It was also selected by the Greek Army for their Mannlicher-Schoenauer Model 1903 rifles. . This rifle appears to be a custom sporting rifle made in Belgium for George Briggs of London based on a Mannlicher Schoenauer Model 1900 action. The gun maker may have assembled the action from more than one box of parts, because the bolt and trigger guard have a different serial number than that of the receiver. The rifle has both Belgian and British proof marks. It has a 25” barrel and a checkered walnut stock with a short 9 ½” forend and a pistol grip with a rounded bottom. The barrel shows several light handling marks with a few tiny dings and a spot of scratches just in front of the forend on its underside. There is thinning on the back half of the barrel, the bolt knob and the edges of the sights and the receiver. There is surface loss on the trigger guard and the bolt release. The stock shows several light handling marks with a few compression marks in the buttstock and one in the forend at the edge of the magazine. The bore is mostly bright, turning gray in the grooves near the muzzle, and shows moderate wear in the pronounced rifling. The rifle has everything one could want in a sporting rifle: it is lightweight and fast handling with a three leaf express sight that is perfect for fast sight acquisition and getting the first shot of quickly. Mannlicher-Schoenauer rifles are known to have the smoothest action of any bolt action rifle, helped a little by their rotary magazine that does not drag on the bolt like the follower in a conventional magazine. Anyone who has an interest in collecting the early hunting rifles of the early 20th century should be interested in this rifle. If the collectors don’t show enough interest, this is going to make someone a very nice deer rifle.