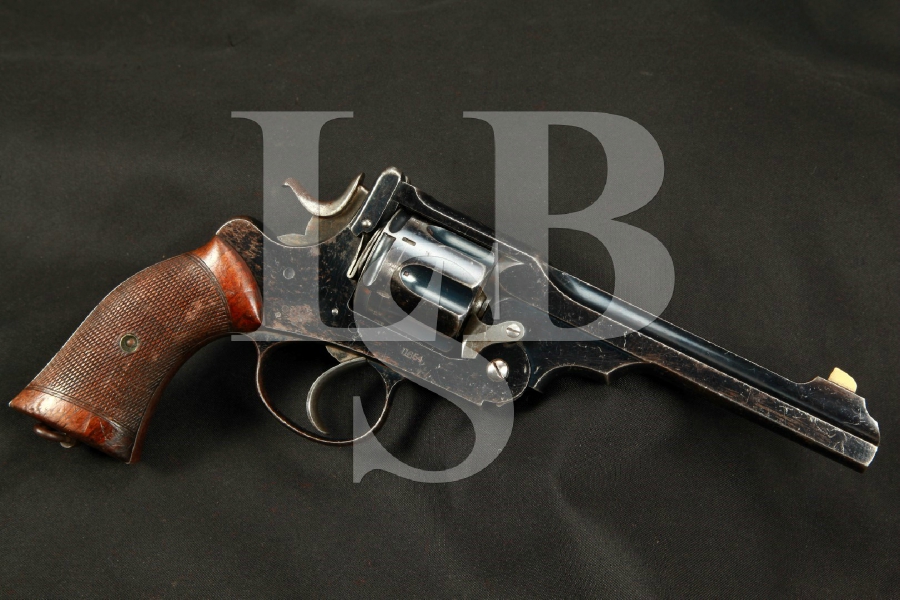 Stock Configuration & Condition: The grips are checkered walnut on a square butt grip frame. The smooth borders of the grips show several compression marks each. The checkering shows moderate wear with several mars. The grips are in about Good to Very Good overall condition.

Bore Condition: The bore is bright and the rifling has seven wide grooves with narrow lands. The rifling shows sharp rifling but not especially deep. Metford rifling was used in this model, which only has a groove depth of 0.005”. There is no erosion in the bore.

Overall Condition: This handgun retains about 60% of its metal finish. There are spots of surface frosting scattered over the sides of the frame with an area of surface etching on each side of the frame and small spots of rust showing in the cylinder flutes and bolt stop cuts. There is also a small scab of solid erosion at the top of the front strap. The front strap and backstrap show surface loss with a brown patina forming. There is thinning on the edges of the barrel, frame and cylinder. The barrel, cylinder, trigger guard and the sides and underside of the frame show numerous handling marks with tiny dings. The barrel latch and hammer checkering show light wear and are still sharp to the touch. About half of the screw heads are disfigured. The markings are all clear except for the seven small crossed flags figures, which are too small to make out clearly. Overall, this handgun rates in about Very Good condition.

Mechanics: The action functions correctly in double action but the sear will not catch in single action. The barrel and cylinder lockups are SOLID. The extractor has a single pin to guide it into position as well as its shaft.

Our Assessment: From “Webley Revolvers” by Bruce & Reinhart: “The Webley W.G. models started with the Model 1886 and ended with the Model 1896. The revolver’s “W.G.” marking was meant to represent “Webley Government” model. This model was sold to both civilians and to officers of the British Army (who had to supply their own personal weapons), and there was also a target version available with target sights. Unlike the matte finish of the Service revolvers, the W.G. models had a polished blued finish. The W.G. revolvers achieved almost immediate success in shooting matches. At the 1889 NRA Wimbledon Camp matches, celebrated American shooter Chevalier Ira Paine found his revolvers were not eligible, picked-up a Model 1889 he had never shot before, and obtained three “Highest Possible” scores with it.”. This revolver was sold to the Army and Navy Cooperative Society for sale to British officers, and with the British being involved in several wars in Africa during the late 1890s as well as conflicts in Afghanistan, the revolvers were probably sold as fast as they could be made. This revolver has a 6” barrel marked with the distributor’s name. It has its original finish and all of the parts have matching serial numbers, including the grips. The revolver is in about Very Good condition with 60% of its finish remaining. There is thinning on the edges of the barrel, cylinder and frame, with surface loss on the front strap and backstrap. There are spots of surface frosting and surface etching on the sides of the frame and small spots of rust on the cylinder. The barrel, cylinder and the sides of the frame show numerous handling marks and small dings. The checkered walnut grips show several compression marks each. The checkering shows moderate wear with a few mars in each grip. The bore is bright with sharp Metford rifling. The cylinder and barrel lockups are solid and the double action trigger pull is smooth, but the sear is worn and the hammer will not stay cocked for single action operation. This is a very well made revolver and we can see how the target version could have won so many matches. This revolver shows a bit of rough handling, which is to be expected of a revolver sold to a British officer at the turn of the century – England was involved in several wars in Africa as well as conflicts in Afghanistan. It wouldn’t be long until Britain was involved in the Boxer Rebellion in China and WWI. British officers had to go in harm’s way, and their weapons were going to see use. This will made a nice addition to a collection of Webley revolvers. Although the finish looks a little rough, most of the WG models we have seen look a far sight worse.