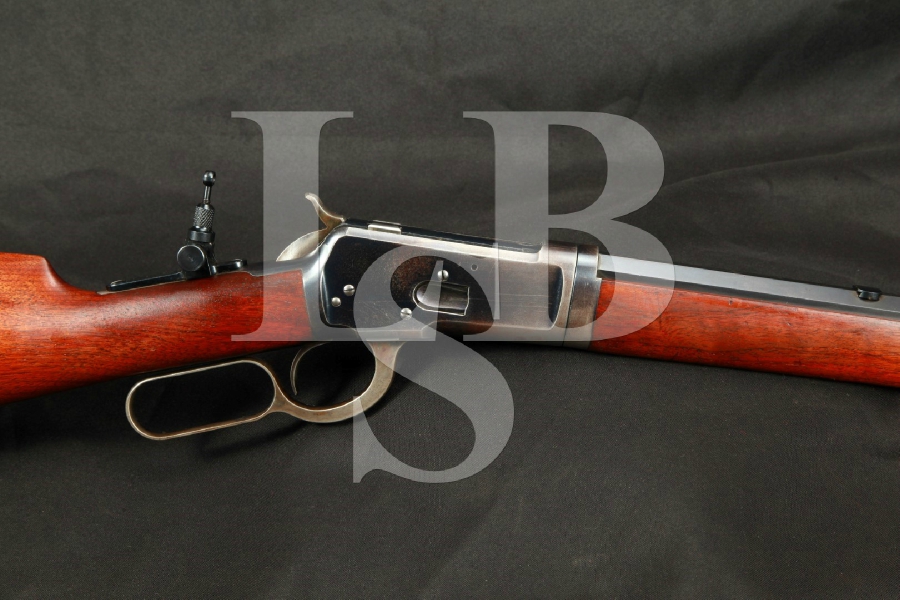 Action Type: This rifle has a lever action and a half-length tubular magazine.

Barrel Length: The half-octagon half-round barrel with half-length magazine tube is 24 ¼” in length. The magazine tube protrudes through the nosecap about 2”.

Sights / Optics: The front sight is a German silver blade that is dovetailed into the barrel and secured with a set screw while the rear sight dovetail is filled with a blank. There is a folding aperture sight mounted on the upper tang marked “MARBLE / ARMS” and with their logo. The sight is micrometer click adjustable for windage and elevation, but is missing its screw-in eyepiece.

Stock Configuration & Condition: The stocks are 2 piece walnut with a straight grip, a black checkered hard rubber shotgun style buttplate marking with a Winchester Repeating Arms logo, and a blued nosecap on the forend. There is a fiddleback pattern in the wood at the front of the forend that gives it a distinctive look. There is oil staining in the wrist area, at the rear of the forend and in the old bruises in both the forend and buttstock. There are handling marks through the belly of the stock and on the right side and underside of the forend, with finish loss in the back half of the forend. There are a few circular drag lines on the right side of the buttstock along with an area of tiny compression marks, and a single compression mark on the left side of the buttstock. There is also a small compression mark at the front right side of the forend and several shallower marks along the left rear side. The wood to metal fit is excellent. The LOP measures 13 1/8” from the front of the trigger to the back of the buttplate. The buttplate shows light wear at the heel and toe but still has sharp checkering. The buttplate is in about Fine condition. The stocks appear to still have their original finish and are in about Fine condition.

Type of Finish: The barrel, magazine tube, nosecap and receiver are blued. The hammer and lever are case colored.

Bore Condition: The bore is bright with sharp but shallow rifling. There are a few tiny spots of very light erosion about 2” from the muzzle.

Overall Condition: This rifle retains about 80% of its metal finish. The barrel shows a few tiny nicks through the finish in front of the front sight, several light marks in its front half, and an area of marks through the finish on the underside just in front of the magazine tube. The barrel also shows marks through the finish where the rear sight was mounted and the nosecap shows a few small marks through its finish and thinning. There is surface loss on the barrel extension and on the top and underside of the receiver, with thinning and light handling marks on its sides. The edges of the barrel are sharp. The screw heads are also sharp except for the two screws in the lower tang, which are disfigured. The markings are clear. The hammer checkering shows moderate wear. Overall, this rifle rates in about Fine condition.

Mechanics: The action functions correctly. The action is tight and the hammer has a half-cock safety position. The trigger is crisp. We did not fire this rifle.

Box, Paperwork & Accessories: The tang sight is included. The rifle also comes with a letter from the Cody Museum stating that this rifle was made in 1903 with a half-octagon barrel, half magazine, chambered in .32-20 and in takedown configuration. Its buttplate was changed to a shotgun style hard rubber buttplate just before it shipped from the warehouse on March 8, 1904.

Our Assessment: Per Wikipedia: “The .32-20 Winchester, also known as the .32 WCF, was the first small-game lever-action cartridge that Winchester produced. It was initially introduced as a black-powder cartridge in 1882 for small game, varmint hunting, and deer. Colt produced a single-action revolver chambered for this cartridge a few years later. It has a good reputation for accuracy in rifles as well as the few handguns that have been chambered for it. Because of its low power, it destroys very little meat, making it a good hunting round for appropriately sized game.”. Some years back, Paco Kelly wrote an outstanding article for reloading the .32-20 for everything from varmints up to deer, so please see: http://www.leverguns.com/articles/paco/3220wcf.htm. This is a vintage Winchester 1892 takedown rifle made in 1903 with a 24” octagon barrel, a half-magazine and with a shotgun style hard rubber buttplate. It has since been fitted with a modern Marbles tang sight, the rear sight was removed and its dovetail was filled with a blank. The rifle is in about Fine condition with 80% of its original finish remaining. There are a few light marks in the barrel with heavier marks through the finish on its underside in front of the magazine tube. There are also marks through the finish where the rear sight once resided, and surface loss, thinning and light handling marks on the receiver. The edges of the barrel are sharp and the wood to metal fit is excellent. The wood shows a several handling marks, a few compression marks and a few deeper circular drag lines on the right side of the buttstock. The bore is bright with sharp but shallow rifling and a few tiny spots of very light erosion several inches from the muzzle. The action is tight. This is a very nice honest rifle that has seen some use but looks great and is in great mechanical condition. Winchester 92’s of this vintage are always collectable and the takedown models even more so. This rifle even comes with a letter from the Cody Museum documenting its configuration including the hard rubber shotgun style buttplate, which was custom ordered and installed just before it shipped. This will make a very nice addition to a collection of vintage Winchesters.