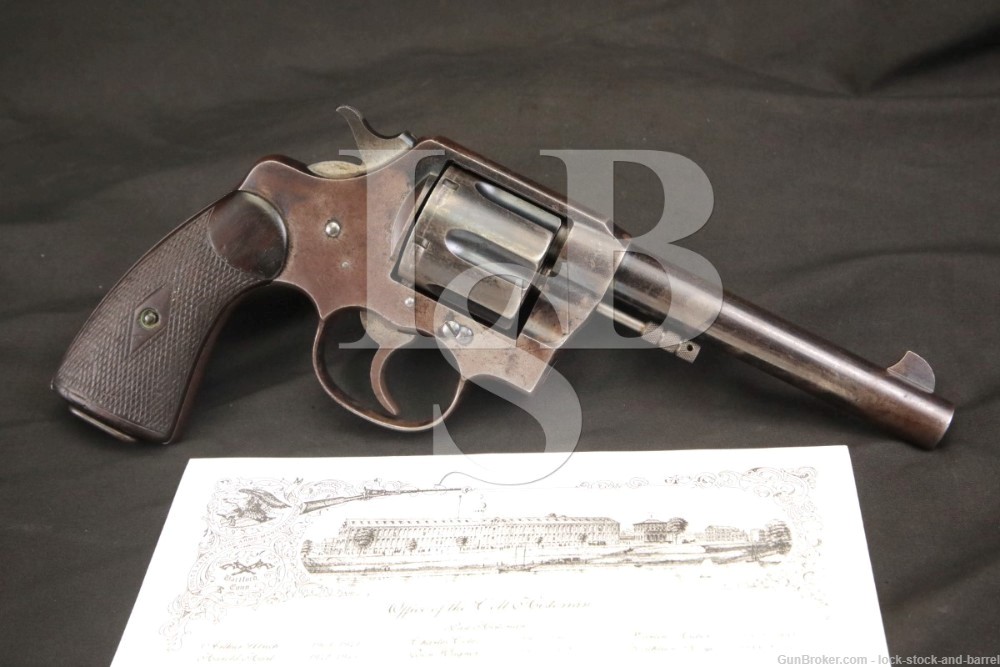 Sights/Optics: The front sight is a tall blade fixed to the barrel. The rear sight is a “U” shaped groove in the top of the receiver.

Stock Configuration and Condition: The grips are two-piece checkered walnut with smooth diamonds around the grip screw escutcheons. The grips have scattered nicks, scuffs and scratches with odd patterned wear on the bottom faces which matches up with a similar wear pattern on the butt of the frame. The wood has darkened with age and handling. The checkering is generally well defined. There are no chips or cracks on the exterior, the interior of the left panel has cracking at the screw escutcheon. Overall, the grips are in about Very Good condition.

Bore Condition: The bore is semi-bright with well defined rifling. There is scattered light erosion and some minor pitting in the bore.

Overall Condition: This revolver retains about 40% of its metal finish. There is scattered finish wear, most notable in the grip areas but otherwise fairly evenly scattered. Most worn areas show discoloration from oxidation. There are several scattered nicks, scuffs and scratches including a concentration on the sideplate. There is a spot of patterned wear on the butt which matches up with similar wear on the bottoms of the grips. The action shows operational wear. There are tool marks around the sideplate screw heads. The screw heads range from sharp to tool marked with strong slots. The markings are clear. Overall, this revolver is in Good-plus condition.

Box, Paperwork, and Accessories: This revolver comes with a Colt Archives letter which confirms that it shipped November 4, 1909 to Depot Quartermaster in Philadelphia, Pennsylvania as one of 300 revolvers of the same type in a shipment to the United States Government. The letter confirms that this revolver was factory engraved with its USMC marking and with a lanyard swivel.

Our Assessment: Colt came out with their large framed double action New Service revolver in 1898. The Army was looking for a large caliber double action pistol to replace their .38 caliber S&W and Colt pistols that had proved to have inadequate stopping power during the Philippine-American war, and adopted the New Service revolver chambered in .45 Colt in 1909. The Model 1909 would eventually be replaced as the US Army sidearm by the 1911, but the 1909 played a part in ensuring that America’s first autoloading sidearm would be a .45.

This M1909 Colt New Service is an early example made in 1909 and purchased for the United States Marine Corps. This was an interesting time in USMC history as the “Banana Wars” were ongoing, Marine aviation began, and The Great War would break out a few years later. While we do not have any information about this specific revolver’s service history, Colt Archives have confirmed that it is a genuine USMC Model 1909, so it could have participated in any or all of these. This example is in Good-plus condition, showing wear consistent with a century old service revolver, retaining a decent bore and strong mechanics. This will be a nice addition to a U.S. Marine Corps sidearm, Colt or early 20th Century revolver collection. Please see our photos and good luck!