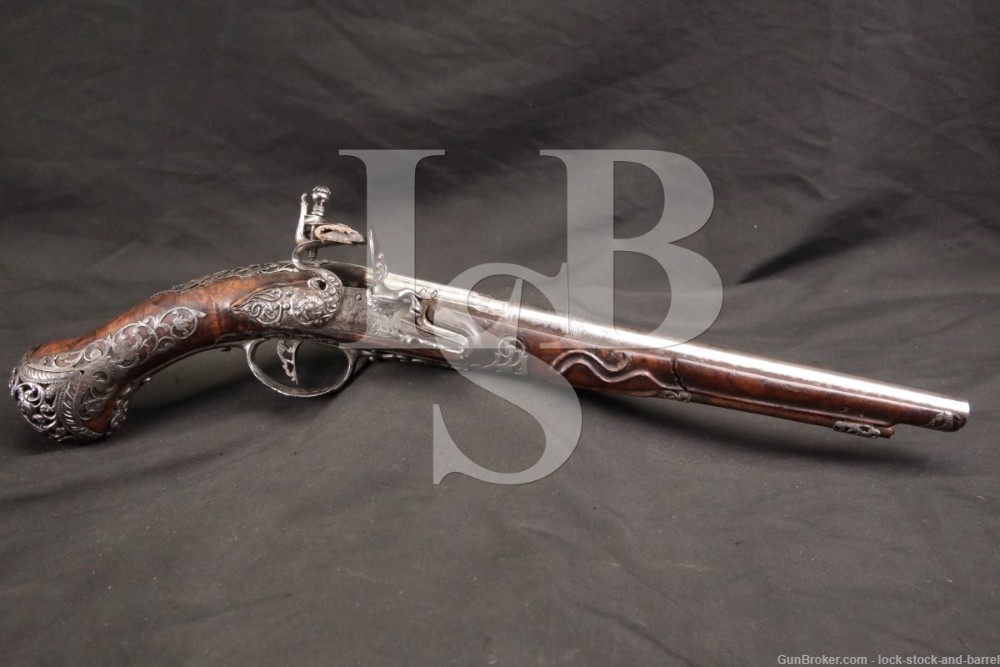 Bore Condition: The bore is dark and coated in scattered light-moderate erosion.

Overall Condition: The gun has no metal finish, it was finished bright. There is some scattered light surface oxidation but the gun remains mostly bright. There are some light handling marks, nicks and scuffs. The markings remain clear. The screwheads are only lightly tooled and remain serviceable. Overall, the gun is in Very Good condition for an Antique.

Box Paperwork and Accessories: There is an included ramrod that is damaged (the front portion of it has broken off).

Our Assessment: The Cominazzo dynasty of gunmakers was established in the mid-16th Century by Lazaro Cominazzo (hence the use of his likeness on most of the items made by the family well after his passing). Like most gun-makers of the period, the Cominazzo family specialized in making specific components for arms that would be assembled with other gunmaker’s work. The Cominazzo’s specifically focused on making barrels (hence the Cominazzo marking on this gun’s barrel). The Cominazzos reached their apex under the tutelage of Fortunato Lazarino during the mid-17th century, barrels made by the family at the time were typically around .50 caliber and beautifully crafted. Cominazzo barrels were not just used by Italian gun-makers, they were sought after by British and various Northern European gunsmiths as well. Unfortunately, the firm was later taken over by Lazarino Cominazzo III who died in 1696 (one source claims he took-part in an abortive uprising against the Venetian Republic which was at war with the Ottoman Empire at the time, but the source did not give many details). This gun has a barrel made by the Cominazzo family.  The lock-plate appears to bear the name Pietro Agosti, but we were unable to find much information about that particular gunmaker. The gun has some wear, including a patch repaired crack at the center of the forend and a damaged ramrod. Despite the wear, the gun is an absolutely beautiful piece of artwork with beautiful engravings on all the parts, the gun is truly impressive. This is a wonderful item that will surely appeal to historical collectors. Good luck on your bid!