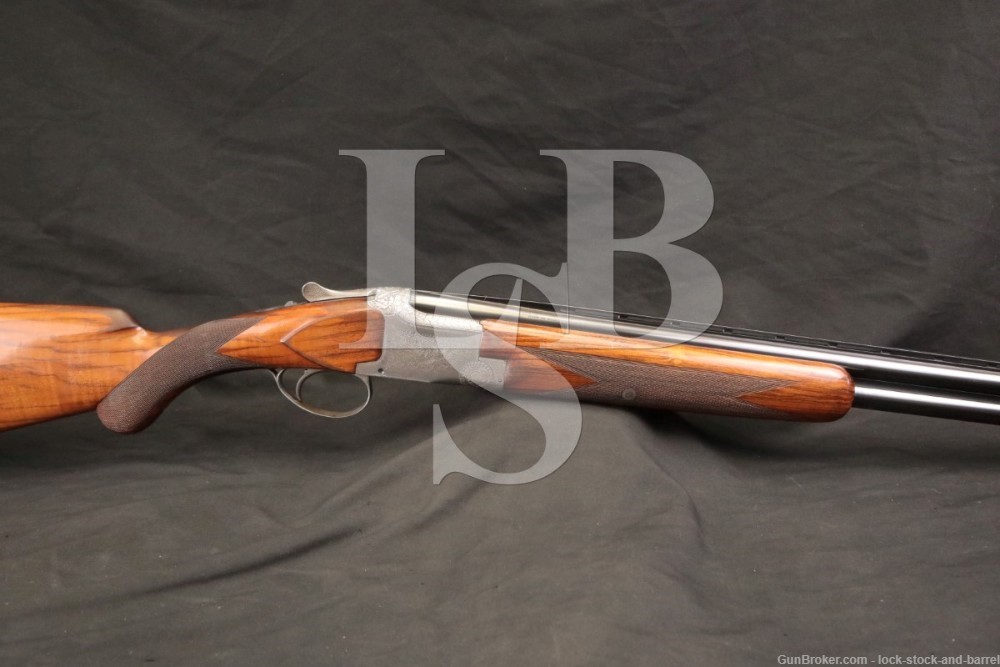 Markings: The left of the top barrel is marked “BROWNING ARMS COMPANY_ST. LOUIS, MISSOURI / SPECIAL STEEL – 20 GA. – SHELLS 2 3/4? AND 3″”, the right is marked with patents above “MADE IN BELGIUM” with patent numbers. At the breech on the left, the top barrel is marked “**”, the bottom “**-“, the bottom-left of the monoblock is marked “12058” and there are inspector marks on the bottom of the monoblock between the lugs. The left of the forend latch, the latch spring-loaded release is marked, and the cocking lever lifter are all marked “12058”. The top tang is marked “12058”. There are proofs on the left side of each barrel and on the watertable. The receiver has Grade II engraving with engraving by master engraver Felix Funken. The sides of the receiver have scroll engraving with pigeons and the bottom has floral motif scroll engraving. Both bottom rear corners are signed “FUNKEN”.

Sights / Optics: The front sight is a metal bead at the front of the rib. The top of the rib is checkered for glare reduction.

Stock Configuration & Condition: The stocks are two-piece checkered walnut with a round bottom pistol grip, straight comb, and Browning buttplate. There are some areas of finish loss and discoloration, the most noticeable are on the wrist from use. There are some scattered compressions, draglines, and some scratches. Some of the most noticeable marks are scattered over the buttstock. There are a few little dings into the wood. There are a few tiny hairline cracks at the rear of the top tang, they are hardly noticeable and nothing major. The checkering is strong. The LOP measures 14 1/4” from the front of the trigger to the back of the Browning buttplate. The drop at comb is approximately 1 5/8″ and the drop at heel is approximately 2 3/8″. The plate has some scattered light wear. The cast is slightly off, almost neutral. Overall, the stocks are in about Fine condition.

Overall Condition: This shotgun retains about 93% of its metal finish. There is some finish loss at the muzzles. There are a few scattered marks through the finish on the barrel set. There is some finish wear on the barrel set from assembly and disassembly. The coin receiver has some spots of discoloration from previous oxidation, most noticeable on the right side and on the top tang. There is some discoloration from previous oxidation on the lever. There are some spots of light surface oxidation on the trigger guard and forend iron. The markings are clear. The screw heads are sharp to lightly worn with strong slots. Overall, this shotgun is in about Fine condition.

Mechanics: The action functions correctly including the ejectors. The safety does NOT set automatically when the action is opened but functions properly when manually set. We have not fired this shotgun. As with all used firearms, a thorough cleaning may be necessary to meet your maintenance standards.

Our Assessment: After the death of John Browning, his son Val would complete an over under shotgun with a single selective trigger and ejectors; the Superposed was introduced in 1931, it was an instant success; the factory did not produce any of these shotguns during WWII but just after the war ended, the factory came roaring back to life, creating some of their best product to date. This is a post-war FN produced Grade II “Pigeon” 20 Gauge from 1957, in about Fine condition, retaining about 93% of its metal finish. This one has game scenes that were done by Master Engraver Felix Funken. Mr. Funken was active from 1926 to 1960 before he passed away in 1965. He was one of the original FN engravers and this was done at the height of his career. We do not typically see signatures on both sides of the receiver, so there is the possibility that Mr. Funken did the game scenes and an apprentice did the remaining coverage, no matter that case, this is a beautiful shotgun! There is some wear to the metal and wood but the action is still spot on and the trigger is crisp. Val’s SST is still known as one of the most reliable and ingenious of its kind, even though the patent is nearing 100 years in practice. With barrels choked Fixed Modified over Fixed Improved Cylinder, this is going to make for a nice shotgun for the field or the range but is certainly worthy of a collection. Please see our photos and good luck!