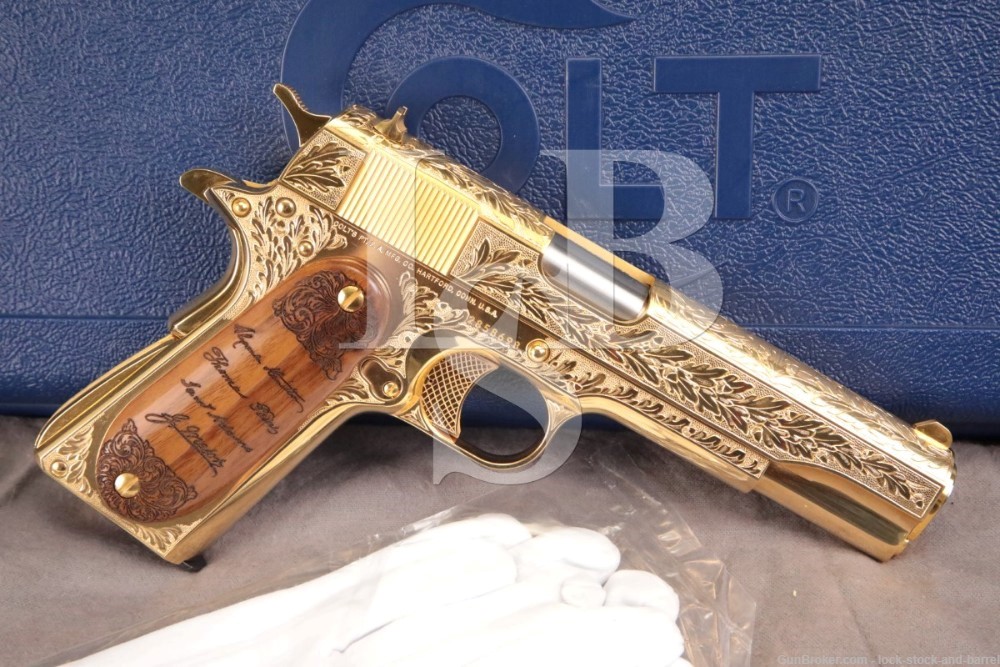 Markings: The left side of the slide has engraving with a minuteman and “THE RIGHT TO KEEP AND BEAR ARMS SHALL NOT BE INFRINGED” on banner surrounded by oak-leaf engraving. There is a rampant colt logo behind the serrations on the left of the slide. The top and right of the slide as well as each side of the frame have matching oak-leaf engraving. The bottom of the trigger guard is marked “No 68″. The right of the frame is marked “COLT’S PT. F.A. MFG. CO. HARTFORD, CONN. U.S.A. / 2858698”. The top of the barrel is marked “-COLT 45 AUTO-“. The grips have laser-engraving with scroll at the tops and bottoms, the left panel has the signatures of George Washington, John Adams, Thomas Jefferson, and James madison, the right panel has the signatures of Alexander Hamilton, Thomas Paine, Samuel Adams and George Mason.

Sights / Optics: The front sight is a blade fixed to the front of the slide. The rear sight is a square notch dovetailed to the rear of the slide with two round recesses.

Stock Configuration & Condition: The grips are two-piece oval walnut with the above-mentioned decorations. The grips have no notable wear or damage, only light handling marks. There are no chips or cracks. Overall, the grips are in Excellent condition.

Overall Condition: This pistol retains about 99% of its metal finish. There is no notable wear or damage, only light handling marks. The screw heads are sharp. The markings are clear. Overall, this gun is in Excellent condition.

Mechanics: The action functions correctly. The slide has very light play to the frame. We did not fire this pistol. As with all used firearms a thorough cleaning may be necessary to meet your maintenance standards.

– One 7-round Colt magazine.

Our Assessment: Made in 2013 as a limited edition of 100 pistols to pay tribute to the Founding Fathers and the Second Amendment, this Colt Government Model 1911 was commissioned by America Remembers. Here is what they have to say about the pistol:

“As patriotic Americans, we are proud of our Founding Fathers and the freedoms they enumerated for us, especially through the Constitution and the Bill of Rights. The ideas and truths set out in these documents are what makes America special and sets us apart as the greatest nation on earth, a beacon of freedom and opportunity for the rest of the world.

America’s forefathers laid the ground for America’s freedom with the Declaration of Independence in 1776. After victory was secured in the Revolutionary War, America’s forefathers envisioned unending freedom for our country and drafted the essential documents outlining our new nation’s freedoms: the Constitution and the Bill of Rights. At the heart of those inspired documents, the Founding Fathers laid a foundation guaranteeing freedom to every American citizen and limiting the role the government would play in shaping that freedom.

The ‘insurance policy’ on the whole package is the Second Amendment – the Right of the People to Keep and Bear Arms – and that is exactly how the Founding Fathers intended it.”

We couldn’t have said it better ourselves. This pistol will make a wonderful addition to any collection as well as a fine gift for anyone who can appreciate the Second Amendment and the Founding Fathers. Please see our photos and good luck!