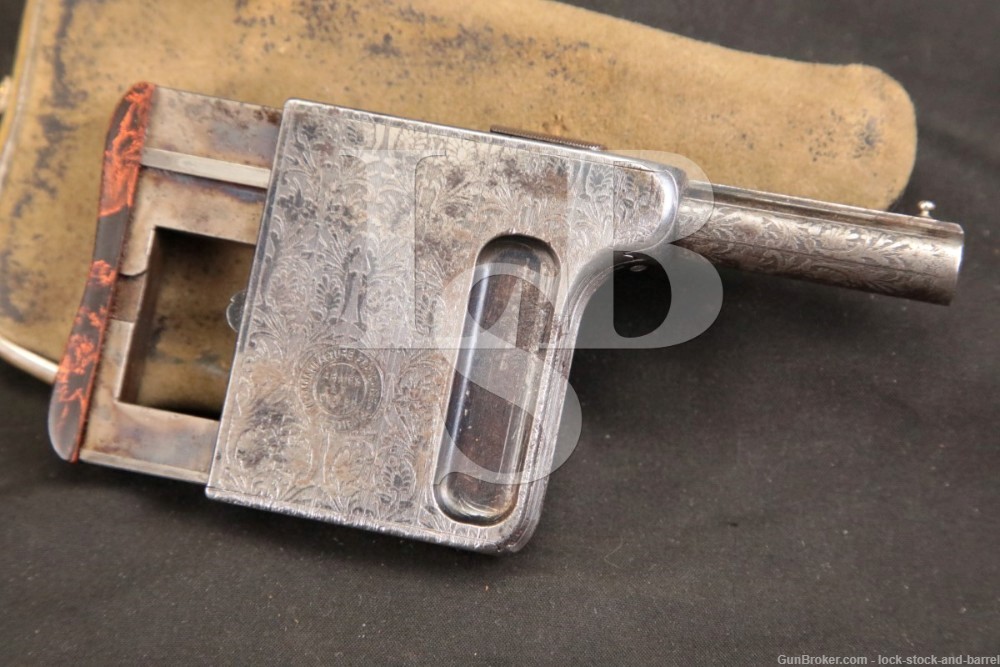 Sights / Optics: The front sight is a bead screwed into the top of the barrel’s solid rib. There is no provision for a rear sight other than sighting over the top of the sliding cover over the port.

Stock Configuration & Condition: The dovetailed palm piece is checkered hard rubber with black and orange coloring. The grip has faint handling wear with only light handling marks. The checkering is sharp. There are no chips or cracks. Overall, the grip is in Excellent condition as Antique.

Bore Condition: The bore is light gray with well defined rifling. There is scattered light erosion and infrequent minor pitting in the bore.

Overall Condition: This palm-pistol retains about 50% of its metal finish. The operating arm retains fairly strong case color with infrequent light surface erosion. The receiver and sideplate have strongest finish in the scallops on the sides and some strong finish on the bottom behind the barrels. Most other finish is scattered and mottled with areas worn to white or showing light surface erosion. The engraving is generally well defined and most markings are clear, others are worn, but legible. The screw head is sharp. The markings are clear. Overall, this pistol is in Fine condition as Antique.

Mechanics: The action functions correctly. There is a safety mounted on the left side of the receiver. It has three positions, the lowest being “D” for disassemble. The pistol fires in double action mode only. The left of the pistol has 5 witness holes. With the side plate removed, all of the internal mechanics can be seen and worked on. As with all used firearms, a thorough cleaning may be necessary to meet your maintenance requirements.

Box, Paperwork & Accessories: Included is a coin purse-style cover for the pistol.

Our Assessment: The palm-pistol was an early concept for repeating, compact handguns suitable for self-defense. Some, perhaps most, of the best-known designs came from France and this is one example, the Gaulois No. 3 made by ManuFrance. Palm-pistols’ mechanisms tend to be similar to that of a double-action revolver, however they are typically thinner with the cartridges held in either an internal box-magazine or a radial cylinder. The Gaulois utilizes the former, with a five-round capacity. The mechanism is rather intriguing with a central cam attached to the safety lever, turning the cam which adjusts the position of the sear. In safe, the sear slides into a notch on the bolt, stopping it from progressing forward far enough to fire. In the fire position, the sear is lowered to a point where it can interact with a slope on the bottom of the bolt, firing once the sear has been depressed by the slope. In disassemble, the sear is disengaged entirely. The mechanism is quite elegant, and being able to see it in operation with the sideplate removed is very neat. While the palm-pistol saw some success in the late 19th and early 20th century, the development of autoloading pistols of similar size, capacity, and reliability would soon see them lose favor for defensive use. Their limited production period has led to them becoming quite popular with collectors, an example of a repeating firearm which is something like a half-step between a revolver and an autoloader.

This example of the Gaulois is a No. 3, the highest grade they produced. The pistol is in Fine condition as Antique, appearing to have spent some time in its included case, but showing a decent bore and strong mechanics. You’d be hard pressed to find a better one. It will make a great addition to a collection of pocket pistols or for those who can appreciate intriguing mechanisms. Please see our photos and good luck!