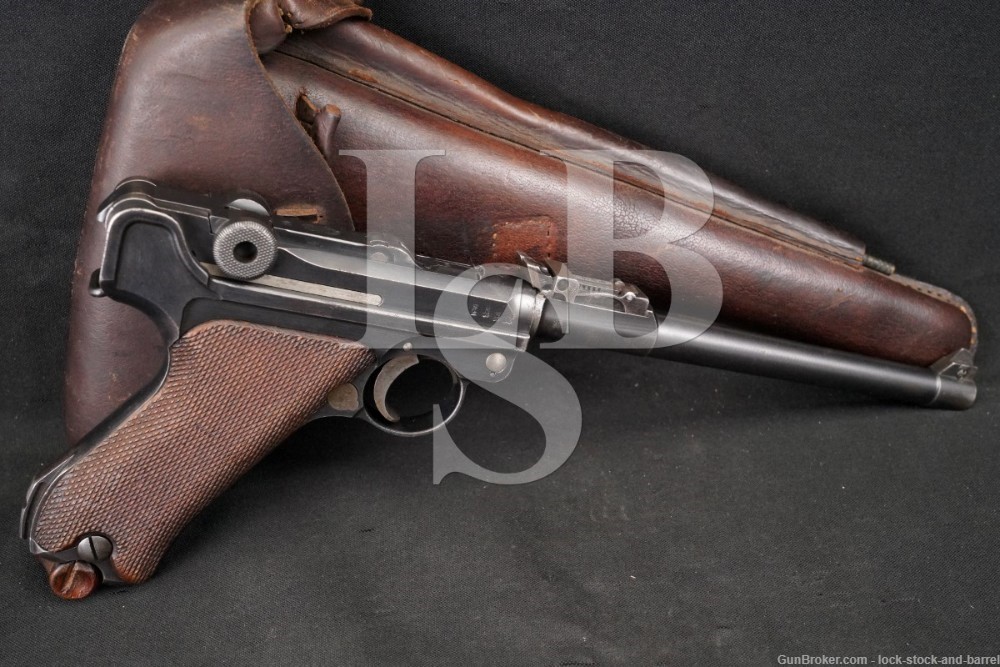 Stock Configuration & Condition/ Grip: The grips are two-piece checkered wood. The grips have some light handling marks, nicks and scuffs. Notably, there is a light crack on the left panel under the safety notch and some patches of discoloration. The checkering is mostly sharp. Overall, the grips are in Very Good condition.

Bore Condition: The bore is semi-bright with sharp rifling. There is some light erosion concentrated in the grooves.

Overall Condition: The pistol retains about 75% of its metal finish. There are some light handling marks, nicks and scuffs on the gun’s metal surfaces. Notably, the finish has worn off around the muzzle and leading edges. Also, there are scattered patches of light surface oxidation where the finish has thinned/worn off and some patches of light pitting on the left side of the barrel. The markings remain clear. The screwheads are only lightly tooled and remain serviceable. Overall, the pistol is in Very Good condition.

Mechanics: The action functions correctly. The slide to frame fit is snug. We have not fired this pistol. As with all used firearms, a thorough cleaning may be necessary to meet your maintenance requirements.

Box Paperwork and Accessories: The gun comes with an appropriate brown leather holster meant for the Lange Pistole 08 (there is no indication the holster was made for this exact pistol though, and it lacks any surviving maker’s marking) and a cleaning rod. The holster has some light-moderate handling marks with the strap that secures the lid having fallen off. Overall, the holster is in Good condition. Also included is a single magazine with a wood base marked “3327 / a”. The magazine is not matching. The magazine has some light wear and is coated in light oxidation, but it remains in Very Good condition.

In 1913 Kaiser Wilhelm II, the German Emperor, allowed for the adoption of the Lange Pistole 08 colloquially known as the “Artillery Luger”.  The gun featured a longer barrel, 8-position tangent rear sight and a provision for a shoulder stock (no shoulder stock is included with this gun). Although originally intended as a defensive armament for artillery and machine gun crews, the Lange Pistole was used throughout the German military,  including as a carbine with a drum magazine (no drum magazine is included with the gun) by the famous Stoßtruppen (storm troopers) during WWI. Some surplus Lange Pistoles survived WWI and were eventually pressed into service during WWII, but not to the same extent as the gun had been used in the First World War.

This particular specimen is a beautiful handgun. It has all matching parts except the magazine, including the distinct rear sight and extended barrel. One thing worth noting, there is an Erfurt style German Army inspection mark on the barrel despite the gun being made by DWM. This was a common feature of late war guns, while there is no surviving record to explain this anomaly it is widely accepted that this was done during WWI. Aside from the magazine and holster, all the guns parts are serial matched. The gun retains the ergonomic fit, pleasing aesthetic and mechanical prowess one would expect from a Luger. This is a great option for historical firearms collectors. Good luck on your bid!