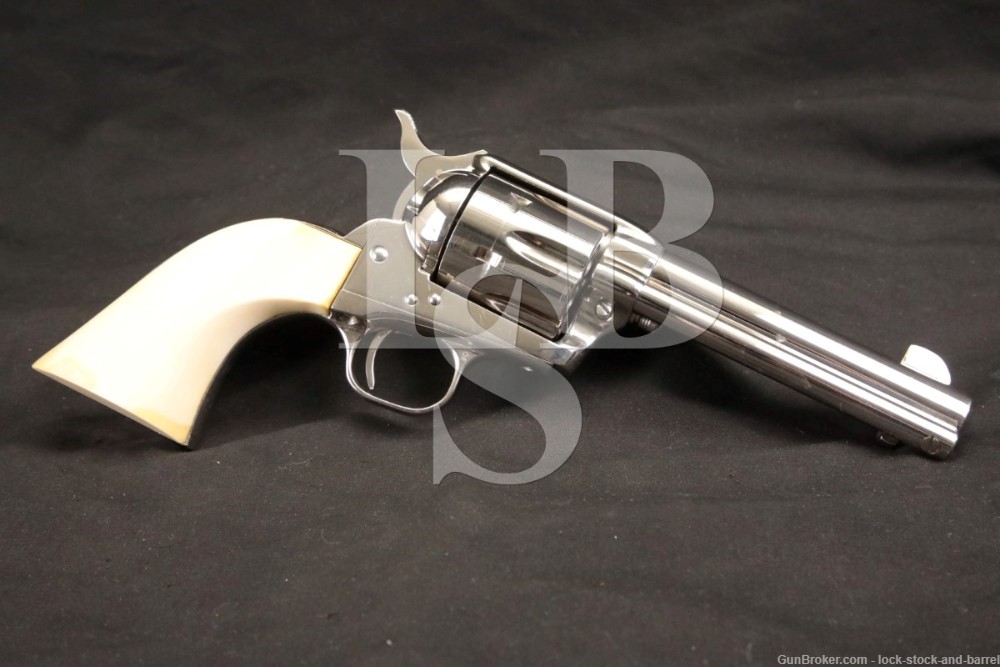 Sights/ Optics: The front sight is a blade fixed by the muzzle. The rear sight is a square-notch integral to the top-strap.

Stock Configuration & Condition/ Grip: The grip is one-piece smooth bone. The grip has minor handling wear with some discoloration and some grain lines on the bottom faces. There are no chips or cracks. Overall, the grip is in Fine condition as not original to the gun.

Overall Condition: The revolver retains about 92% of its metal finish. There are some scattered minor scuffs and scratches which do not go through the finish. There are some scattered cloudy spots, mostly on the right of the barrel and on the ejector housing. The cylinder has one small spot of erosion through the finish. The action shows light operational wear with a thin turn-line on the cylinder. The screw heads range from sharp to tool marked with strong slots. The markings are clear. Overall, this revolver is in Very Good-plus condition.

Mechanics: The action functions correctly. The single-action trigger is crisp. The cylinder locks with barely perceptible play on each chamber. We have not fired this revolver. As with all used firearms, thorough cleaning may be necessary to meet your maintenance requirements.

Everyone should have a Colt Single Action Army, and this would be a beauty to add to any collection. Manufactured in 1979, this revolver is in Fine-Excellent condition, appearing to have seen limited and responsible use. With a 4 3/4″ barrel, nickel finish and chambered for .44 Special, this is a classic Single Action Army chambered for a classic cartridge, as well as being a fairly scarce configuration. It has also been equipped with an attractive bone grip which sets off the finish nicely. The pistol’s scarce configuration will make it suitable for addition to a collection, but it should also make for a fun shooter that will draw some eyes at the range. Please see our photos and good luck!