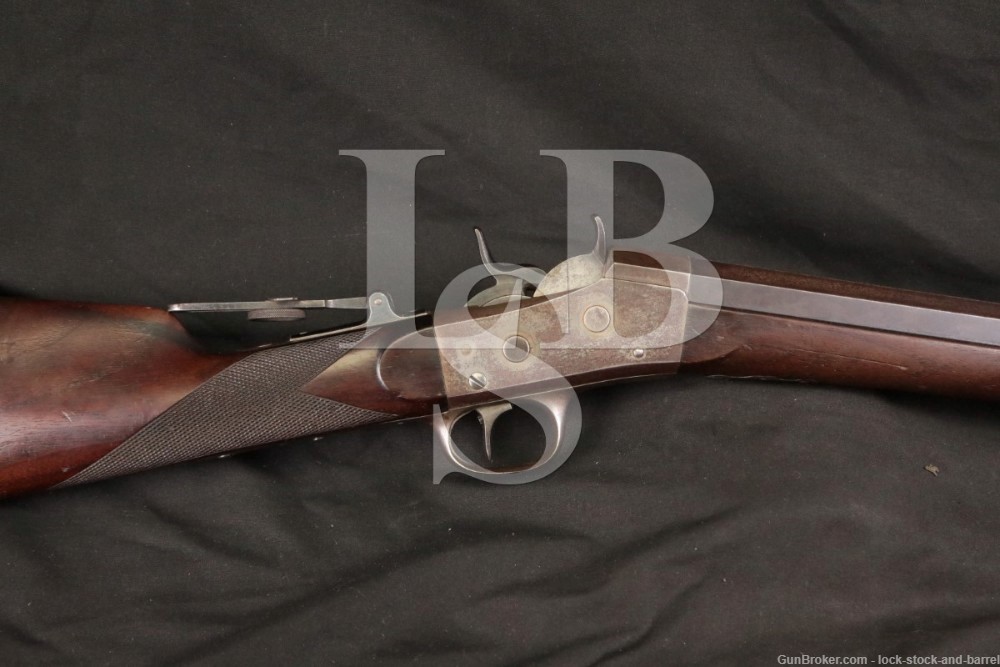 Caliber: We measured the bore and it is approximately 10mm (.40 inches) but we were unable to determine which cartridge this gun is chambered for. These gun were made to accommodate a wide variety of different rounds (many of which are obsolete today) and we could not chamber a .40-70 round despite the bottom of the barrel is marked “40-70”. We recommend having the bore cast to determine the appropriate cartridge to use with this rifle (the gun is not made to accommodate smokeless powder and will require a blackpowder cartridge of some-sort).

Sights/ Optics: The front sight is a dovetailed blade which was made by Lyman. The rear sight is a diopter screwed onto the top tang .

Stock Configuration & Condition/ Grip: The stocks are two-piece wood featuring a forend with a metal nose and a provision for an attachment near the receiver at the bottom (there is a threaded slot, but no attachment is included or installed), a checkered straight wrist, a straight comb and a Schützen style brass butt-plate. The stock has light-moderate handling marks, nicks and scuffs. Notably, there is some light wear at the tip of the top-tang, a nick on the toe where the stock meets the butt-plate and a nick on the right side of the forend. The LOP is 13” from the trigger to the rear of the butt-plate. The brass butt-plate is coated in light oxidation and heavily tarnished and now has a patina color. The drops are approximately 2.25 and 2.75 inches from the comb and heel respectively. Overall, the stock is in Very Good condition for an Antique.

Bore Condition: The bore is semi-bright with mostly sharp rifling. There are some patches of scattered light erosion concentrated in the grooves.

Overall Condition: The rifle retains about 3% of its metal finish. There is some trace finish, but most of the gun is coated in light-moderate surface oxidation and has taken a deep patina color. There are scattered light handling marks, nicks and scuffs. Notably, there is light wear along the leading edges. The markings remain mostly clear. The screwheads are lightly tooled and remain serviceable. Overall, the rifle is in Very Good condition for an Antique.

Our Assessment: While Remington Rolling Blocks are most famous for their use as martial arms by various powers throughout the mid-19th century (including an abortive contract with Egypt which led to the companies eventual bankruptcy in 1888), a number of sporting rifles built with the action were also produced. These guns were built to the same high standard as the military rifles, but were chambered for a variety of sporting cartridges and often featured custom features requested by customers. There is no great way to specifically date these guns, but the company markings help. This rifle was made prior to Remington’s acquisition by Marcellus Hartley & Partners in 1888, this can be deduced from the barrel marking which indicates the gun was made when the Remington family still ran their namesake firm. The gun is beautifully crafted with a checkered wrist and Schützen style butt-plate and has target sights. The front sight was made by Lyman but the rear sight has no clear identifying marks. While the gun has wear typical of an Antique, it remains nicely preserved and should make a worthy addition to a historical firearms collection. Good luck on your bid!