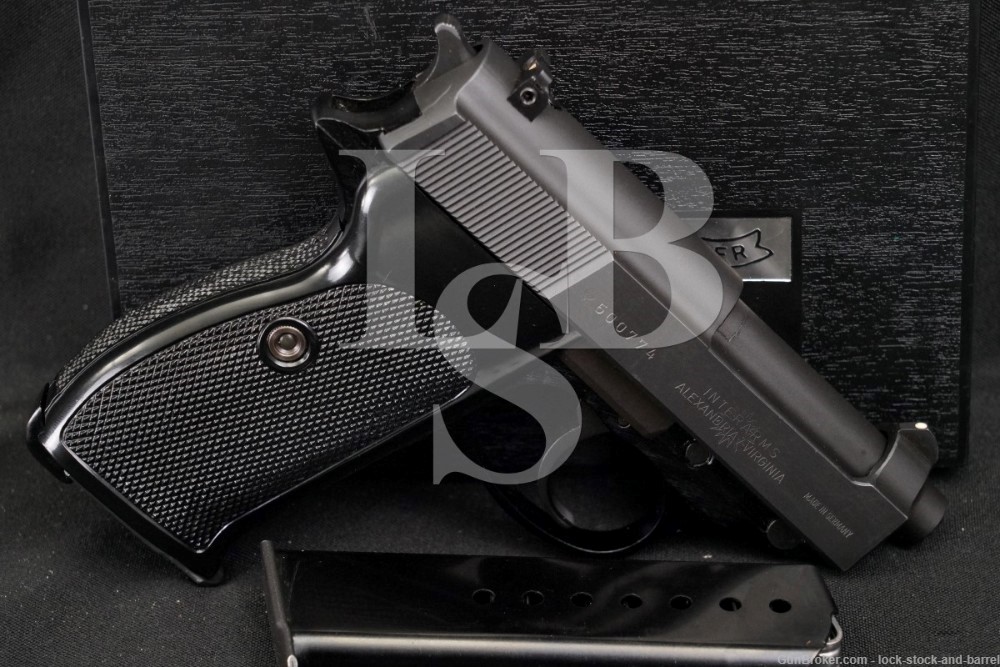 Sights/ Optics: The front sight is a blade with a white dot and the rear sight is an adjustable dovetailed square-notch with a white square under the notch.

Overall Condition: The pistol retains about 95% of its metal finish. There are some light handling marks, nicks and scuffs. Notably, there is some light wear along the frame and barrel’s leading edges. The markings remain clear. The screwheads are lightly tooled and remain serviceable. Overall, the gun is in Fine condition.

Box Paperwork and Accessories: The gun comes with a total of two magazines, a user manual and serial matched box.

Our Assessment: The Parabellum Pistole Modell 1908 (the Luger in lay terms) was showing its age by the early 1930s and the German Army began to seek out a new handgun to equip its forces. German arms manufacturers submitted a number of designs to replace the aged Luger. The design which most impressed the military was the AP (Armee Pistole or Army Pistol) designed by Carl Walther Waffenfabrik, but the gun’s concealed hammer design was considered inefficient and the gun was reworked to accommodate an external hammer. The new handgun was named the Heerespistole (also translates to Army Pistol; Heer translates to Army) and it featured an external hammer and could be fired as either a single or double-action based on the needs of the user. This improved design impressed the German Army which opted to adopt the handgun as its new standard issue sidearm in 1938. There are only a few minor dimensional changes between the P.38 and HP, they were done to facilitate mass production. The gun would remain the standard issue sidearm of the Heer until its ultimate defeat at the end of WWII. The stalwart design remains in service with a number of military and police formations to this day.

This particular specimen is a rare variant of the P.38 that was made for commercial sales in 1977. The gun, designated the P.38-K (K is short for the German word Kurz or Short), has a shortened 2.8” barrel (these guns were sold between 1974-1980). The gun has some light handling and storage wear, but it is nicely preserved with a pleasing aesthetic and strong mechanics. This is a cool little handgun that will surely appeal to collectors and Walther fans. Good luck on your bid!