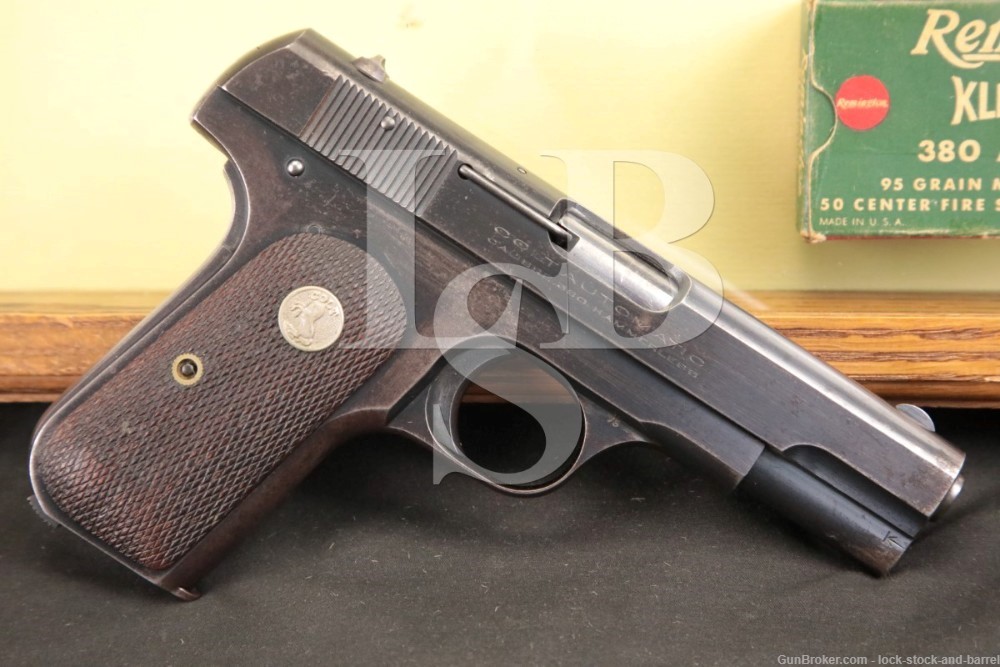 Stock Configuration & Condition: The grips are two-piece checkered walnut with silver-colored Colt medallions. The grips have fairly even light handling wear and some discoloration from age and handling. There are a few scattered nicks and scuffs. The checkering is generally well defined. There are no chips or cracks. Overall, the grips are in Very Good condition.

Finish Originality: Original to the parts. The ejector assembly has been replaced.

Overall Condition: This handgun retains about 70% of its metal finish. The finish is thinning at all edges. Most of the balance is in scattered minor surface oxidation and some light surface erosion, including some concealed by the grips when they are installed. There are some scattered light nicks and scratches. The action shows light operational wear. The screw head is sharp. The markings are clear. Overall, this handgun rates in Very Good condition.

Mechanics: The action functions correctly and the slide has minor play to the frame. It has a grip safety, a magazine disconnect, and a manual safety. The safety can be used to lock the slide back. We did not fire this handgun. As with all used firearms, a thorough cleaning may be necessary to meet your maintenance standards.

Box, Paperwork & Accessories: This pistol comes with a shadow box holding the pistol, a brown leather holster, a green and red Remington Kleanbore ammunition box (empty), a single 7-round magazine and Lieutenant Junior Grade Ralph Cullinan Jr.’s License to Carry Concealed Firearm. The license was issued by San Diego County Sheriff Ernest Dort on 17 May, 1938 and lists this pistol by serial number.

Our Assessment: The Colt Model 1908 Pocket Hammerless is a semi-automatic pistol designed by John Browning, and was the 2nd of the Colt concealed hammer models, following the Model 1903. Despite the title ‘Hammerless’, the M1903 and M1908 pistols do have a hammer, which is covered and hidden from view under the rear of the slide. This allowed the weapon to be carried in and withdrawn from a pocket quickly and smoothly without snagging. These pistols were popular civilian firearms for much of their life, and it was a popular backup/off-duty model with police officers in the United States. Gangsters also favored this pistol, including Bonnie Parker and John Dillinger.

This is a Colt 1908 Type IV Pocket Hammerless semi-auto made in 1937, during the interwar years, and it has an interesting history documented by the included San Diego County concealed carry permit. In May of 1938, Lieutenant JG Ralph Cullinan Jr. was issued this permit while he resided aboard the USS Holland (AS-3), a submarine tender stationed in San Diego. As with many other U.S. Navy officers, the outbreak of WWII and the massive expansion of the fleet would result in promotion, and he was a Lieutenant Commander by the time the Butler-class destroyer escort USS Lawrence C. Taylor was commissioned in May of 1944, serving as her first commander. Cullinan and the Taylor left New York in August of 1944, arriving at Pearl Harbor later that month, then left in mid-October to join the USS Anzio in a hunter-killer group performing anti-submarine patrols in the Philippine Sea. On 18 November, 1944, the Lawrence C. Taylor, still under Cullinan’s command, successfully sunk the Japanese submarine I-41 near the Philippine island Leyte. Commander Cullins was awarded the Legion of Merit for these actions.

I-41’s early service after being commissioned in September, 1943, was as a supply submarine, operating out of Rabaul and making supply runs to New Guinea and Bougainville Island. After being rearmed for combat patrols, I-41 patrolled in the areas around New Guinea and the Marianas and assisted in evacuating personnel from Guam. I-41’s second war patrol was off the east coast of the Philippines. On 3 November, 1944, I-41 hit the light cruiser USS Reno with a torpedo, but failed to sink her. I-41 reported attacking another task force on 12 November, but no further communication was received from the submarine. It is of note that the submarine was patrolling in the vicinity of the Battle of Samar and was sunk in the general area about three weeks after that famous engagement.

Ralph Cullinan’s 1908 is in Very Good condition retaining about 70% of its finish with wear consistent with carry in areas where it may have been exposed to salt water. With the documented connection to Cullinan and the included display, this will make a fine addition to a collection. Its connection to a Commander whose ship sank a Japanese submarine in 1944 makes it a very special piece, indeed. Please see our photos and good luck!