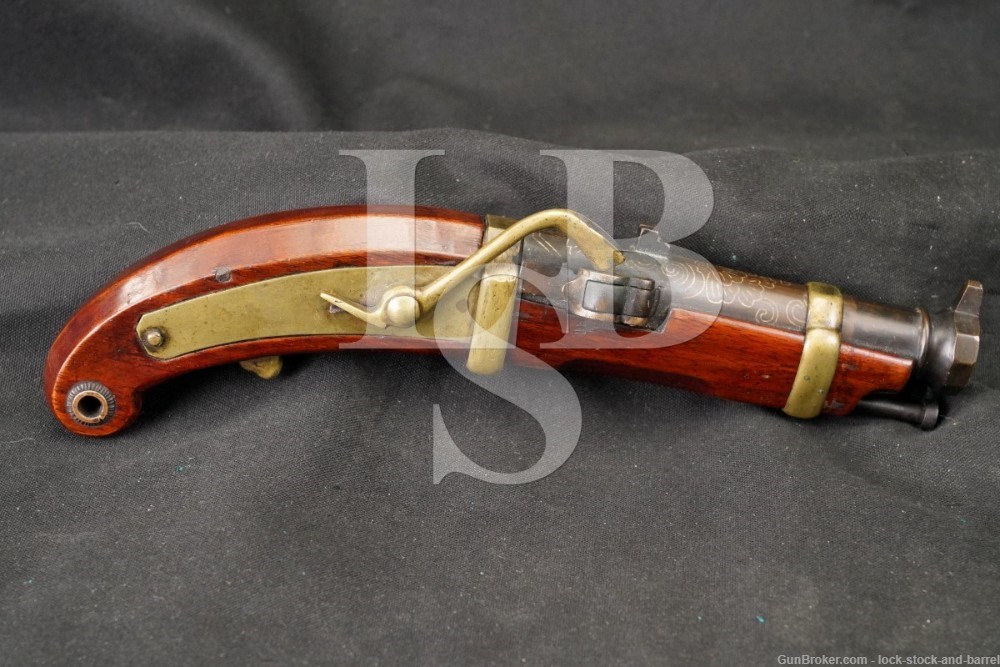 Markings: The barrel is marked with Gold colored decorative markings.

Sights/ Optics: The front sight is a blade at the top of the muzzle and the rear sight is a V-notch fixed between the barrel bands.

Stock Configuration & Condition/ Grip: The refinished stock is one-piece wood featuring a slot in the forend for the included ramrod, two brass barrel bands, a brass lock-plate and pistol grip. The stock has some light handling marks, nicks and scuffs. Notably, there is light wear around the barrel bands, a light crack between the barrel bands on the bottom of the forend and two studs are installed on the left side of the grip. Overall, the stock is in Very Good condition for an Antique.

Bore Condition: The bore is dark and coated in both moderate oxidation and verdigris

Overall Condition: The pistol has no surviving metal finish. The barrel is coated in scattered light-moderate tarnish and has taken a dark patina color, there is verdigris concentrated around the flash-hole. The other brass furniture is lightly tarnished with some patches of light oxidation and verdigris. The gun also has some light wear along the leading edges. The markings remain clear. Overall, the pistol is in Very Good condition for an Antique.

Our Assessment: This is a Japanese made Tanegashima Pistol that was manufactured sometime before the late 19th century. In 1543 a group of Portuguese explorers arrived in Tanegashima, Japan where they sold two matchlocks to the island’s feudal lord Tanegashima Tokitaka (this is where the Japanese matchlock gets its name). The Japanese were able to replicate most of the novel weapon system’s design but were not able to domestically fabricate the weapon system until a Portuguese blacksmith arrived a year later to train them on all the intricacies around firearms development. Within a decade large numbers of the Tanegashimas had proliferated across Japan. The weapon was refined over the decades and saw extensive use during the remaining portion of the  Sengoku period (ca. 1467-1603). In 1603 Tokugawa Ieyasu established the Tokugawa Shogunate and ushered in a 250 years of stability and international isolation remembered as the Edo Period, during this era there was little use for modern weaponry and the Tanegashima only saw limited use, although there were gunsmiths still manufacturing and performing maintenance on the aged guns.

In 1854 United States Navy Commodore Matthew C. Perry arrived in Japan with a modern fleet and forced the country out of its self imposed isolation. It was not long before more advanced firearms began to be introduced to Japan which made the Tanegashima largely obsolete. During this period many Tanegashima muskets were converted to the percussion ignition system. Japanese officials realized that the country had to modernize in order to survive in an increasingly dangerous world. A coup was orchestrated in 1868 which saw the last Shogun (Tokugawa Yoshinobu) overthrown and restored political power to the Emperor, and Emperor Meiji replaced the Shogun. The Meiji period saw the country rapidly modernize with the most significant reform being the establishment of a modern military made up of conscripts. The conscription of commoners threatened the social position traditionally held by the Samurai. Inevitably, a rebellion of the Samurai broke out led by Saigo Takamori in 1877. The archaic warrior class of Japan relied on aged weapons like the Tanegashima when faced against a conscript army with modern firearms, including breechloaders. The results were predictable. Despite fighting bravely the Samurai were crushed, the Meiji reforms would continue forward as the traditionalists were brushed aside. The Tanegashima was no longer needed by Japan as the country began to manufacture modern arms.

The Tanegashima has remained a popular cultural artifact in Japan and a number have been exported. This particular example is a handgun that likely belonged to a Samurai who could carry it on horseback, typically commoners could neither afford nor would they be issued handguns in Feudal Japan. The gun retains the traditional matchlock ignition system and was not converted to the percussion ignition system like so many Japanese Tanegashimas encountered on the market. The stock has been refinished, but the gun still remains aesthetically pleasing and has a functional action. This is a great option for historical firearms collectors. Good luck on your bid!