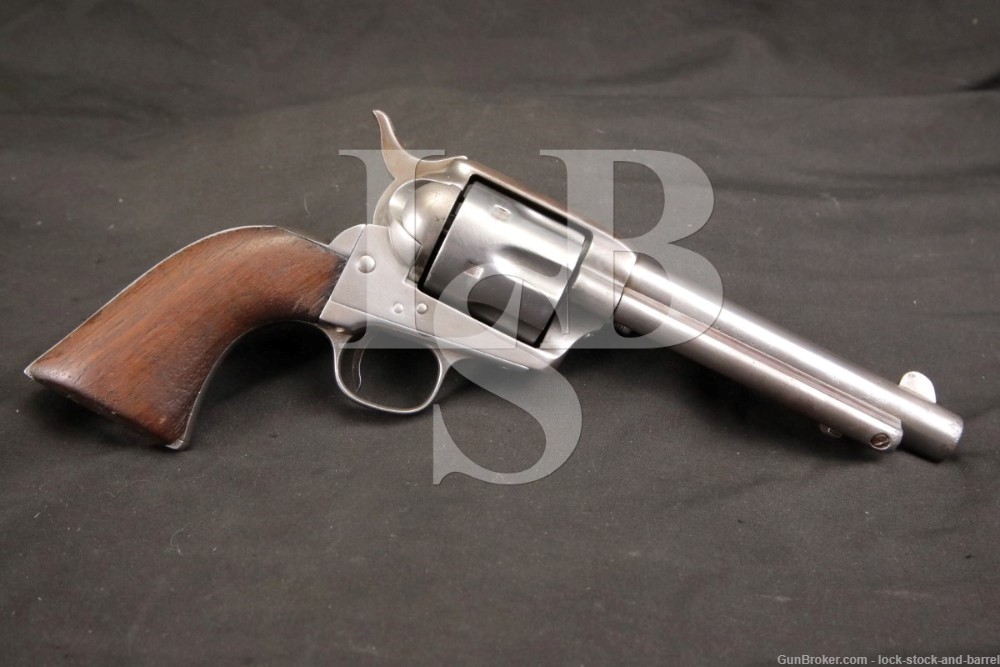 Sights / Optics: The front sight is a blade fixed to the barrel. The rear sight is a “V”-notch at the rear of a groove in the topstrap.

Stock Configuration & Condition: The grip is one piece smooth walnut. The grip has moderate wear with some scattered nicks and dings, most notable on the bottom. There are losses at the bottom-front corner on each side. There is a crack at the top edge on the right. Overall, the grip is in Good condition as refinished Antique.

Finish Originality: The surfaces have been polished bright.

Bore Condition: The bore is gray with worn, but visible rifling. There is light-moderate erosion and pitting scattered through the bore.

Overall Condition: This revolver retains about 0% of its metal finish. The surfaces have been polished bright. Some are starting to show discoloration from oxidation and there is scattered erosion which has been scrubbed out. There are some light nicks and scratches. The action shows operational wear. The screw heads are tool marked with usable slots. Remaining markings range from clear to worn and incomplete. Overall, this revolver is in Fair-Good condition as Antique.

Mechanics: The cylinder has a tendency to over-rotate. Otherwise, the action functions correctly. The cylinder locks with light play on each chamber. The trigger is crisp. We have not fired this revolver. As with all used firearms, a thorough cleaning may be necessary to meet your maintenance standards.

Our Assessment: This revolver started out life in 1878 as a Model 1873 Cavalry revolver and likely saw some use in the Indian Wars of the late 19th Century. It has since been assembled as an “Artillery Model”. Between 1900 and 1903, Colt altered and refinished 5,444 revolvers into “Artillery” models (5 ½” barrel). Per Kopec and Fenn, “A single Artillery revolver often will have parts from three or four different Cavalry revolvers”. The “Artillery” moniker is a collector’s term, as the modified revolvers were most notable for their issue to U.S. Artillery units in the Spanish-American war.

While this revolver’s mixed numbered parts may well have gone through this conversion process, it has since been polished bright, removing some markings and the ejector tab has been replaced. While not all inspection markings are present, it is still fairly likely that other components used to assemble this “Artillery Model” came from genuine U.S. issued revolvers. This revolver must have a very interesting history, if only it could be told. All of the Colt 1st Generation revolvers are heavily collected, and this example has quite an interesting mix of parts, so it could serve as a source of parts for other SAAs as well as displaying well as an “Artillery”. Please see our photos and good luck!