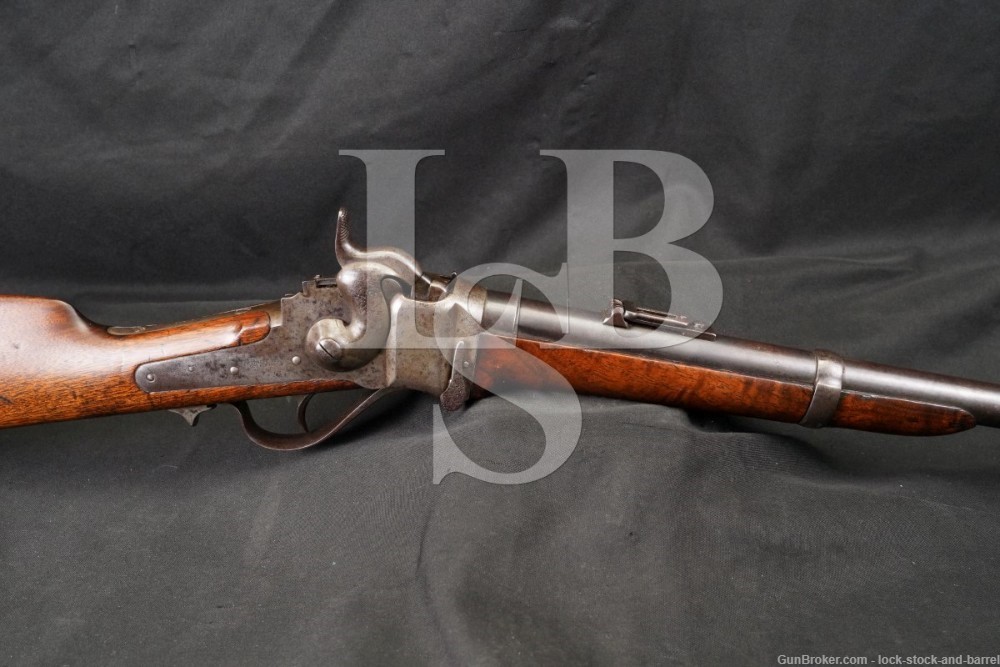 Stock Configuration & Condition/ Grip: The stocks are two-piece wood featuring a forend secured by a barrel band and retaining screw, a straight wrist, a straight comb and a semi-crescent butt-plate. The stock has some light-moderate handling marks, nicks and scuffs. Notably, there are some light handling marks around the sling bar on the left side of the wrist. The LOP is 14” from the trigger to the rear of the butt-plate. The butt-plate is in the white and has some light-moderate oxidation. Overall, the stocks are in Very Good condition for an Antique.

Bore Condition: The bore is semi-bright with mostly sharp rifling. There is scattered light-moderate erosion concentrated in the grooves and around the muzzle.

Overall Condition: The rifle retains about 25% of its metal finish. There is still appreciable bluing on the barrel under the forend. The exposed portion of the barrel is largely coated in light surface oxidation and has taken a dull patina color. The rest of the gun’s finish has worn off and is coated in light surface oxidation which gives it a dull patina color. There are some light handling marks, nicks and scuffs. Notably, there is some light pitting on the hammer, moderate pitting on the receiver lever pin, some light wear around the muzzle and routine wear along the leading edges. Some markings have faded but the discernible markings have been described above. The screwheads are tooled but remain serviceable. Overall, the rifle is in Very Good condition.

Mechanics: The action functions correctly. We have not fired this rifle. As with all used firearms, a thorough cleaning may be necessary to meet your maintenance requirements,

Our Assessment: The Sharps Carbine was a percussion ignition breech-loader that was carried by cavalrymen during the American Civil War. By the end of the four-year conflict the superiority of breech-loaded weaponry had become clear, but the percussion ignition system was showing its obsolescence and new firing mechanisms were developed. Among a number of Civil-War vintage surplus, a number of Sharps Carbines were converted with modern firing pins and rechambered for several calibers. These conversions were both carried out at Springfield Armory and also done by private companies.

This particular specimen appears to have been rebarreled and had its stocks either replaced or refurbished at Springfield Armory. There are government inspection marks on all of the guns metal parts and a cartouche on the left side of the butt. The gun is chambered for .50-70 Govt and despite some superficial wear it remains both aesthetically pleasing and mechanically sound. This is a solid option for historical firearms collectors. Good luck on your bid!