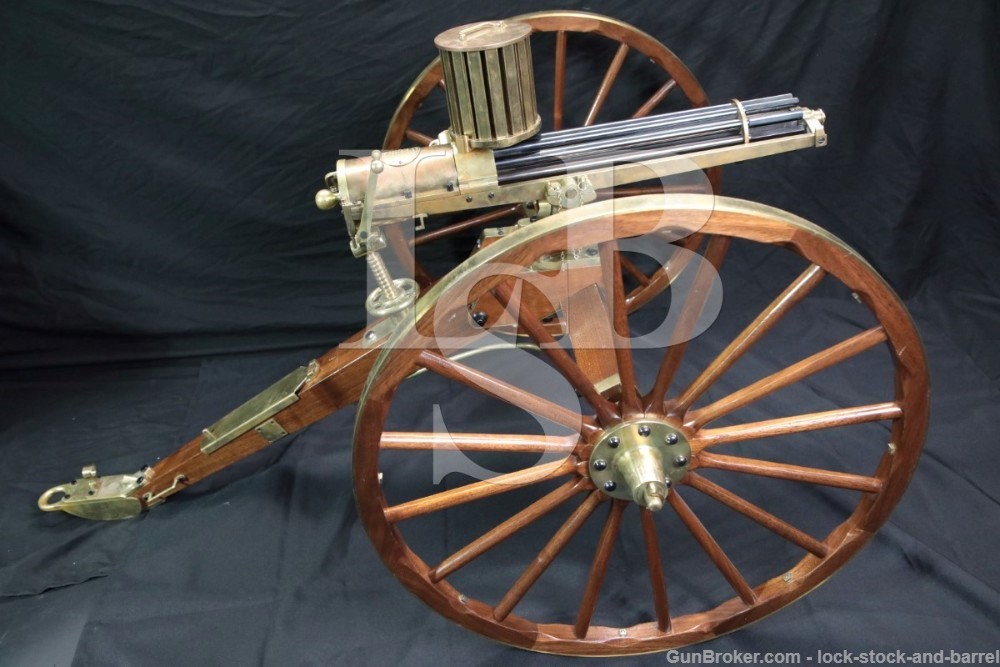 Sights / Optics: The front sight is a brass blade at the front of the right strut of the frame. The rear sight is a “V”-notch mounted to the right-rear of the casing near the crank handle. The rear sight is adjustable for elevation. Elevation and windage can also be adjusted via a dial on the carriage-tail under the rear of the casing and on the left of the oscillator assembly.  The oscillator assembly allows the casing to be held in place for point-firing or oscillated a few degrees left-to-right to create a beaten zone as the handle is cranked.

Stock Configuration & Condition: The gun is mounted on a brass swivel mount installed on a wheeled wood carriage made from wood with brass fittings, rims, gunner’s seat (miniature, not for use as a real seat), hitch, and wheel-guards for an ammo carriage (no ammo carriage included). The brass fixtures show some scattered discoloration from oxidation and a few minor scratches. The wheel’s rims show a little more wear than other fixtures. There are a few scattered spots of mor moderate oxidation. The wood portions of the carriage show some scattered minor scratches and nicks with one more notable ding on the right strut of the axle. There are no chips or cracks. Overall, the carriage assembly is in about Very Good condition.

Finish Originality: Original to the parts. The magazine axle post and the magazine rotary locking tab are after-market replacements.

Bore Condition: The bores are mostly bright and the rifling is generally sharp with light wear. The bores have a few scattered spots of minor erosion.

Overall Condition: This gun retains about 85% of its metal finish. The brass has scattered discoloration from oxidation, most of which should polish out easily with a few scattered minor scratches and marks. The barrels show infrequent light surface oxidation, almost all on the inside of the barrel cluster with little exposed when the gun is assembled. The mechanism shows light operational wear. The screw heads are mostly sharp, a few showing light tool marks with strong slots. The markings are clear. Overall, this gun rates in about Very Good-plus condition.

Box, Paperwork & Accessories: This gun comes with the carriage mount as described and a 240-round (16 slots holding 15 rounds each) Broadwell drum magazine. The magazine functions correctly and is serial-numbered to the gun, in similar Very Good-plus condition. Please note, no magazine will be included for buyers who reside where it cannot be legally transferred.

Our Assessment: Richard Gatling was a prolific inventor with contributions in the fields of agriculture, screw-propellors and his most famous invention, the Gatling Gun. Interestingly, his intent with the Gatling Gun was to reduce deaths from war by allowing a smaller number of troops to produce a greater volume of fire, thus reducing the number of men required to fight in wars. While this did not exactly come to pass, his gun was nonetheless revolutionary, allowing for sustained fire at high rates and, though not considered a machine gun by todays definitions, paved the way for the truly automatic weapons which were to follow. Gatling Guns saw limited use in the American Civil War, being personally purchased by some officers for their units, but was not officially adopted by the U.S. Military until 1866. The guns would also be used by European colonial powers in Africa and Asia and by South American nations including Argentina and Peru. The Model 1874 was one of the earlier iterations, a 10-barrel model with the barrels exposed in front of a bronze casing and with a broadwell gravity-feed drum magazine, all mounted to an artillery carriage which allowed it to be rapidly maneuvered using horses. It incorporated an oscillator mechanism, which allowed the gun to fire at one point or to create a beaten zone a few degrees wide just by cranking the handle, giving it the ability to be used for both direct targeting or area denial.

With painstaking detail, Karl J. Furr hand-crafted this miniature Gatling Gun as a fully functional, .22 Long Rifle caliber replica. It will certainly be easier to set up at the range than a full-sized Gatling Gun and also less expensive to feed than its larger, .45-70 caliber cousins. The gun is in Very Good-plus condition with some scattered minor oxidation, light scratches and handling marks in its metal finish, strong mechanics, and infrequent minor erosion in its bores. This is a rare opportunity to have a fully functional carriage-mounted Gatling Gun of your very own that can also be set up on your desk at home. What could be cooler than that? Please see our photos and good luck!