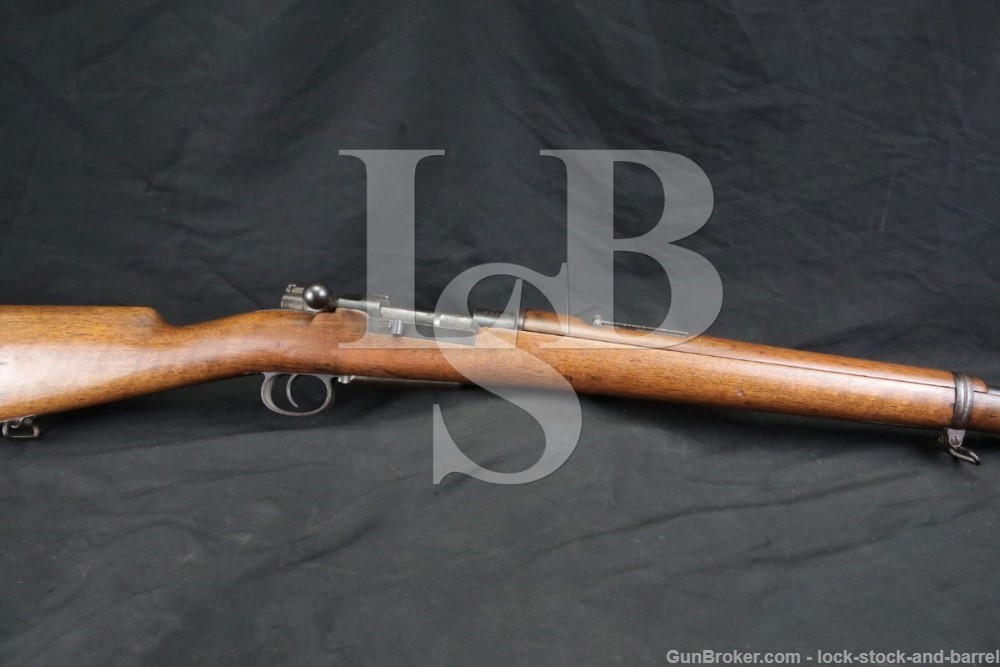 Sights/Optics: The front sight is an inverted “V” post set atop a raised base. The rear sight is a “V” notched blade attached to an escalator assembly marked with arabic numerals.

Stock Configuration and Condition: The stocks are two-piece hard wood with forend cap/bayonet lug, barrel band, handguard, straight wrist, straight comb, and steel buttplate. There are sling swivels front and rear. There are light nicks and dings throughout, most have been oiled over. The LOP measures 13 1/2 inches from the front of the trigger to the back of the buttplate. Overall, the stock rates in Very Good condition.

Bore Condition: The bore is semi-bright and the rifling is well-defined. There is no apparent eroeion, but light stubborn fouling persists.

Overall Condition: This rifle retains about %10 of its metal finish. The visible metal appears to be shifting to light patina and there are several minor nicks and scuffs scattered about. The markings are generally clear. Overall, this rifle is in Good-to-Very Good condition, as antique.

Mechanics: The action functions correctly. We did not fire this rifle. As with all used firearms, thorough and consistent cleaning may be necessary to meet your maintenance requirements.

Our Assessment: This Turkish Model 1938 (M38) started life as a German Model 1893. It was completely rebuilt and remarked sometime around 1935 and is now considered Model 1893/38 variation of the M38. The Turks updated their old rifles to Model 1938 configuration. Conversions started in 1933, but any rifle converted to this standard is commonly called a Model 1938. It appears that every rifle they had was converted to 8mm. The Model 1938 isn’t really a single model, but rather a common set of features. Most Turkish Model 1938 rifles are rebuilt German rifles. The rifle has seen better days but will start off your Mauser build. This rifle is an antique so No FFL is required…unless you live in California!
Good luck and happy bidding.