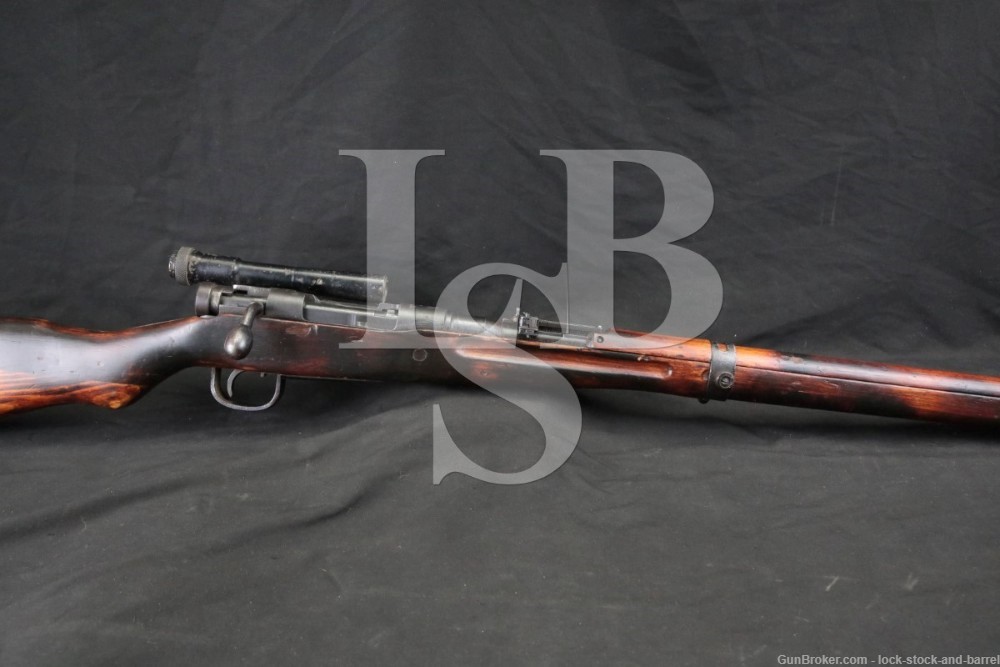 Sights/ Optics: The front sight is an inverted “V” dovetailed between two protective ears which are integral to a banded base fixed by the muzzle. The rear sight is an early production ladder which presents a fixed aperture in the down position. When raised the sight features a slider with an aperture and is marked in distances graduated in 100s from 300-1500 meters inclusive. The rear sight has equipped anti-aircraft wings. There is a scope attached to the left side of the receiver, the base screwed to the left side of the receiver and the scope is secured to the base by a lever. The  scope has scattered light-moderate handling marks where the black finish has worn off. The portions of the scope where the finish has worn off are coated in light-moderate oxidation. Also, the rubber attachment at the rear of the scope has worn off, with some residual patches of rubber still attached to the rear of the ocular lens. The glass is mostly clear and the reticle is sharp. Overall, the scope is in Good condition.

Stock Configuration & Condition/ Grip: The 3 piece stocks feature a two-piece buttstock that has a semi-pistol grip, straight comb and metal butt-plate; a full-length handguard; and forend with a two screw barrel band that has an integral bayonet lug with a slot for the included cleaning rod (the cleaning rod retaining spring has fallen out and is not included), a late issue rear barrel band, finger grooves and a through bolt. Also, there is a sling swivel screwed to the left side of the butt and one fixed to the left side of the rear barrel band. The stocks have some light-moderate handling marks, compressions, nicks and scuffs. Notably, there is light wear ahead of the rear barrel band, light wear ahead of the magazine, the left side of the forend has some light dings above the trigger, a few light dings on the upper right portion of the butt, a light ding on the right side of the forend and a moderate ding on the right side of the handguard. The LOP is 12.5” from the trigger to the rear end of the butt-plate. The buttplate has light handling marks and is coated in scattered patches of erosion. Overall, the stocks are in Very Good condition.

Bore Condition: The bore is semi-bright with sharp rifling. There is scattered light-moderate erosion concentrated in the grooves.

Overall Condition: The rifle retains about 75% of its metal finish. There are some light handling marks, nicks and scuffs. Notably, there is light wear along the leading edges and some scattered patches of light surface oxidation. Also, there are moderate handling marks on the barrel bands. The markings remain mostly clear. The screwheads are lightly tooled and remain serviceable. Overall, the rifle is in Very Good condition.

Box Paperwork and Accessories: There is the attached scope described above.

Our Assessment: This is a Kokura Arsenal manufactured Type 99 Arisaka which is a bolt-action rifle chambered for 7.7mm Japanese rounds. The Type 99 was developed over the course of the 1930s to replace the aging Type 38. The Japanese War Department determined that the 6.5mm Arisaka cartridge needed to be replaced following intermittent fighting that raged in China during the 1930s. In 1938, the 7.7mm cartridge was introduced and the following year a rifle was designed specifically for use with the new rounds. The result was the Type 99 which entered service in 1939 and would remain one of Imperial Japan’s most important firearms until the end of WWII. It was used by Japanese troops across all fronts and it proved itself to be a capable rifle suited to the rigors of the field. Although production of the Type 99 ended with Japan’s surrender in 1945, the rifle would continue to be used in battle. Although small numbers were used in other conflicts, the majority of the captured Type 99 rifles were pressed into service by the Chinese Nationalists (the Guomindong) during the final stage of the Chinese Civil War (circa 1946-1949). Outside of operational use, large numbers of Type 99s (like other Japanese weapons) were acquired by American troops stationed in Japan and brought back to the United States for their private use.

This particular specimen is a sniper variant of the type 99 that appears to have been produced prior to 1943 when production standards were lowered. The gun has anti-aircraft attachments to the rear sight seen on early production guns. The sniper rifles, like this gun, had a distinct serialization pattern, being marked on the top of the receiver rather than the left side. The gun’s attached scope is not matching, but almost every encountered specimen has a non-matching scope, likely as they needed to be replaced after being worn out in the field. This gun was made at Nagoya Arsenal in Japan but the scope was made at Jinsen Arsenal located in Korea (Korea was occupied by Japan from ca. 1910-1945). The scope is a bit worn with the leather attachment at the rear of the ocular lens having worn off, but otherwise the gun’s mechanics remain solid. The gun has an X running through the Royal Chrysanthemum on the receiver, but it is still mostly intact. This is a great option for historical collectors. Good luck on your bid!