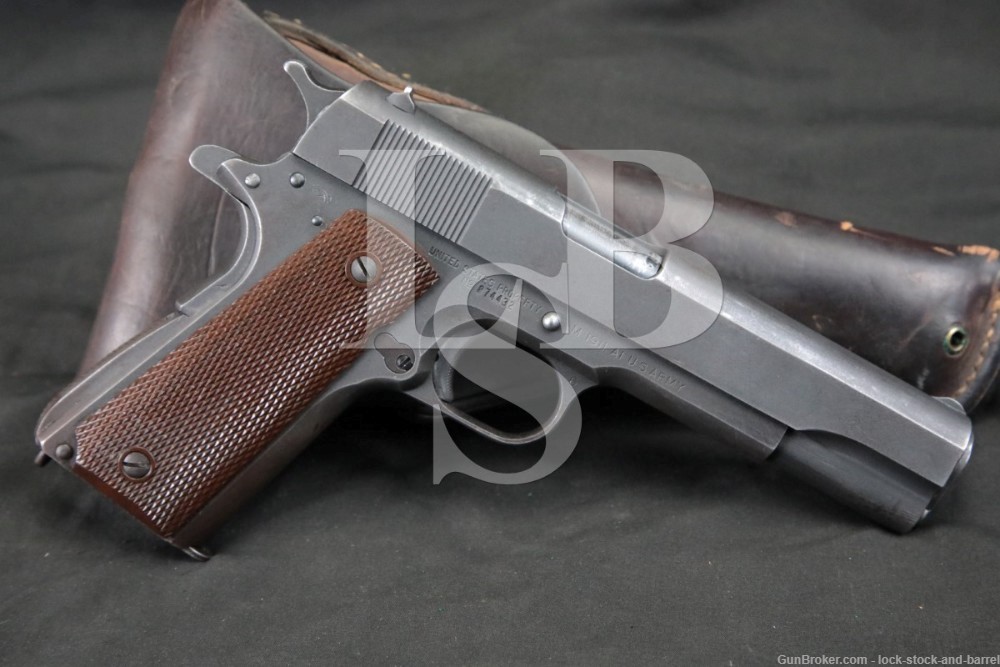 Serial Number: 874432 (This serial number is in a range which was overlapped by Colt. The markings, finish and manufacture of the frame all indicate that the frame was made by Ithaca Gun Co.)

Stock Configuration & Condition: The grips are checkered brown plastic with reinforcement rings around the screws and reinforcement ribs on the inside. The grips have minor handling wear with only a few small marks. There are no chips or cracks. The checkering is well defined. Overall, the grips are in Fine-plus condition.

Please note: The top-left grip screw is either a replacement or the slot was cut improperly, the slot is shallow and does not extend to the edges of the screw head.

Bore Condition: The bore is semi-bright. The rifling is sharp. There is some scattered light erosion in the bore, most notable at the muzzle-end and there is some stubborn fouling in the grooves.

Overall Condition: This pistol retains about 80% of its metal finish. The finish is thinning at all edges. There is handling wear and some minor surface oxidation in the grip areas. There is some other scattered light finish wear consistent with holster use and infrequent minor oxidation, most notable on the chin of the slide. There are scattered light nicks, scuffs and scratches including “idiot marks” on the left of the slide and frame from the slide stop during reassembly. The action shows operational wear. The screw heads range from sharp to tool marked with strong slots, the top-left grip screw has a poorly cut slot as noted above. The markings are generally clear, the Ordnance wheel is incomplete, as is common. Overall, this pistol is in Very Good condition.

Box, Paperwork & Accessories: Included is a dark brown leather flap-holster and a single 7-round magazine. The holster is marked “US” in oval on the flap, this markings shows moderate-heavy wear. The maker’s mark on the back is no longer eligible. “HALE” has been hand-carved on the back of the holster. The holster has scattered wear and discoloration, verdigris at the metal parts, and intact stitching. The magazine is marked “S” on the top of the baseplate. The magazine has scattered wear and light surface oxidation with intact feed lips and a strong spring.

Our Assessment: The 1911 and 1911-A1 pistols served the military of the United States from 1911 to 1985, through two World Wars and the Korean and Vietnam wars. They gained a reputation as a reliable handgun with plenty of stopping power, and are held in high regard by those who have used them. The design was the end-result of a series of developments by famous gun designer John Browning, starting with the Model 1900. The advances made by Browning were revolutionary at the time, and were so successful that they are considered commonplace today. Browning not only developed first a pivoting and then a tilting barrel to allow for a locked system, he developed the concept of “the slide”, which is now synonymous with semi-automatic handguns. During the inter-war years, the design was further refined with an arched mainspring housing, relief-cuts behind the shortened trigger and some minor changes to other small parts, resulting in the 1911A1. This new model would be the US sidearm during WWII, and saw production by a few different companies.

As in the previous World War, Colt and American Arsenals were not able to produce everything that would be required for this war, and production would be contracted to a typewriter company, Remington Rand, a company which made switches and signals for railroads, Union Switch & Signal, and one firearms manufacturer, Ithaca Gun Co. This example was made by Ithaca in 1943, and is one of the earlier guns produced by the Ithaca, New York based company. It has a Du-Lite finish, which would later be replaced by parkerizing and is in the early portion of Ithaca’s first 60,000 gun serial range. It is in Very Good condition, retaining about 80% of its metal finish, a decent bore, and strong mechanics. With its original finish, this would be a great addition to a collection, especially for 1911 collectors missing an Ithaca with original Du-Lite finish. Please see our photos and good luck!