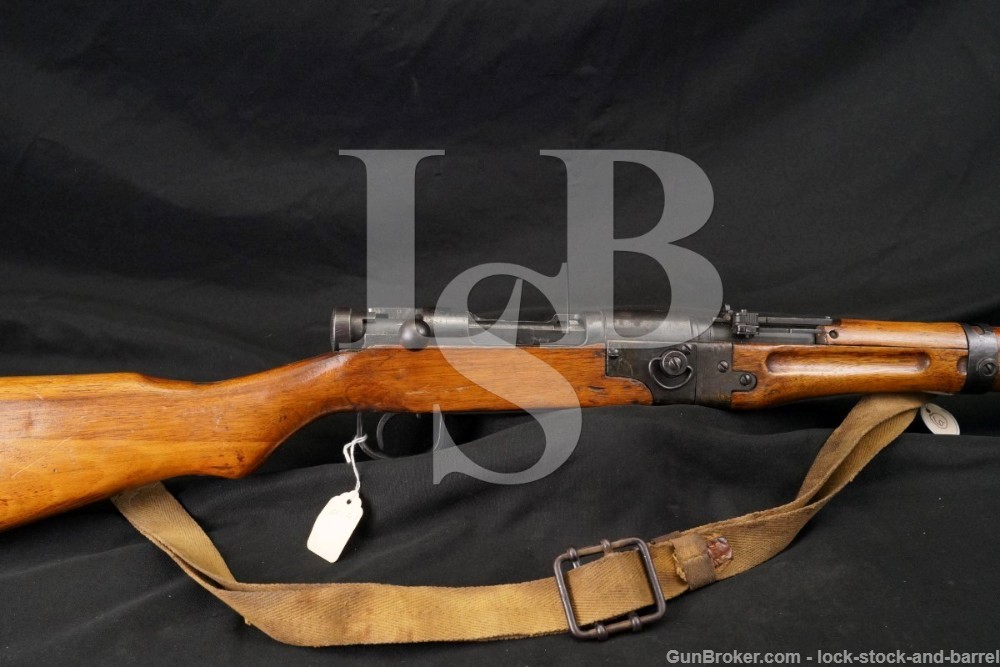 Markings: There is no visible import mark. The top of the receiver is marked with an intact Chrysanthemum (Mum), the Imperial ownership seal, and Japanese characters that translate to “2” and “Type”. The left side of the barrel shank is marked “285”, the left side receiver is marked with the serial number “18911”, and the Japanese symbol for the Nagoya Arsenal. The bolt handle, extractor and firing pin all have matching numbers “911” with Japanese characters on another side of the bolt. Both the knurled safety knob and the bayonet lug are marked “314”. Both of the reinforcing bands in the middle and the tapered wedge have matching marks of “698”.

Sights / Optics: The front sight is a dovetailed blade set on a banded base with two protective ears. The rear sight ladder has a fixed aperture when down and a sliding aperture when flipped up. The ladder is marked from “3-15”, inclusive. The sides fold out to be used as anti-aircraft sights. The AA sights are marked “2” in the middle and “3” on the ends. There are inverted “V” notches on each side of the AA sights.

Stock Configuration & Condition: This rifle is a three-piece stock with a metal buttplate, a straight comb, a semi-pistol grip, a matching set of reinforcing bands, drain hole, finger grooves, barrel band, a nose cap with bayonet lug and provision for a cleaning rod (Included), and two sling swivels  (one on the left side of the barrel band and one on the left side of the buttstock). There are metal reinforcing bands below the front of the receiver and behind the barrel shank. It wraps around the stock and has a “D” ring takedown knob on the right side that holds it together. The takedown screw is captured so it won’t be lost in the field. The wood shows numerous scrapes, scratches and compression marks. There are a few damaged or removed small portions of the surface wood. The LOP measures 12 3/4“ from the front of the trigger to the back of the buttplate. The stock is in Very Good condition as refurbished.

Bore Condition: The bore is semi bright and the polygonal rifling is well defined. There is some light intermittent erosion in the grooves and at the muzzle.

Overall Condition: This rifle retains about 65% of its metal finish as refinished. The bottom metal is scratched. The metal shows light handling marks, scrapes and scratches. Some of the metal has been coated with  a lacquer type finish and shows discoloration from it. Areas of the metal have surface erosion showing through the new finish. Some surface erosion is bleeding through the new finish causing light discoloration. The screw heads have light tool marks and are serviceable. The markings are well defined. Overall, this rifle is in Very Good Plus condition as refinished.

Mechanics: The action functions correctly.  We have not fired this rifle. As with all used firearms, a thorough cleaning may be necessary to meet your maintenance requirements.

The takedown screw is captured so it won’t be lost in the field and it is securely fastened. The rifle can be taken down and put together properly.

Box, Paperwork & Accessories: The rifle comes with a canvas sling. The sling has sporadic soil marks

Our Assessment: The Type 2 Paratrooper rifle is basically a take-down version of the Type 99 Arisaka rifle. The Japanese experimented with several versions of paratrooper rifles, including ones with folding stocks and an interrupted thread-style take-down before settling on this one, which has a screw-in wedge that holds the two halves together. The Type 2 is the only paratroop rifle that was produced in any real quantity with only about 21,200 known to have been produced. The model designation comes from the year based on the Japanese system that counted from the date of the founding of the Japanese Empire in 660 B.C. By this system, the Western year 1942 when the gun was adopted was 2602, with the “2” becoming the model designation.

This Japanese Type II Paratrooper was made during WWII at the Nagoya Arsenal. The rifle has been refinished so it still looks impressive. It still has an intact chrysanthemum and AA sights. This Type 2 Arisaka is worth collecting. Good luck with your bid!